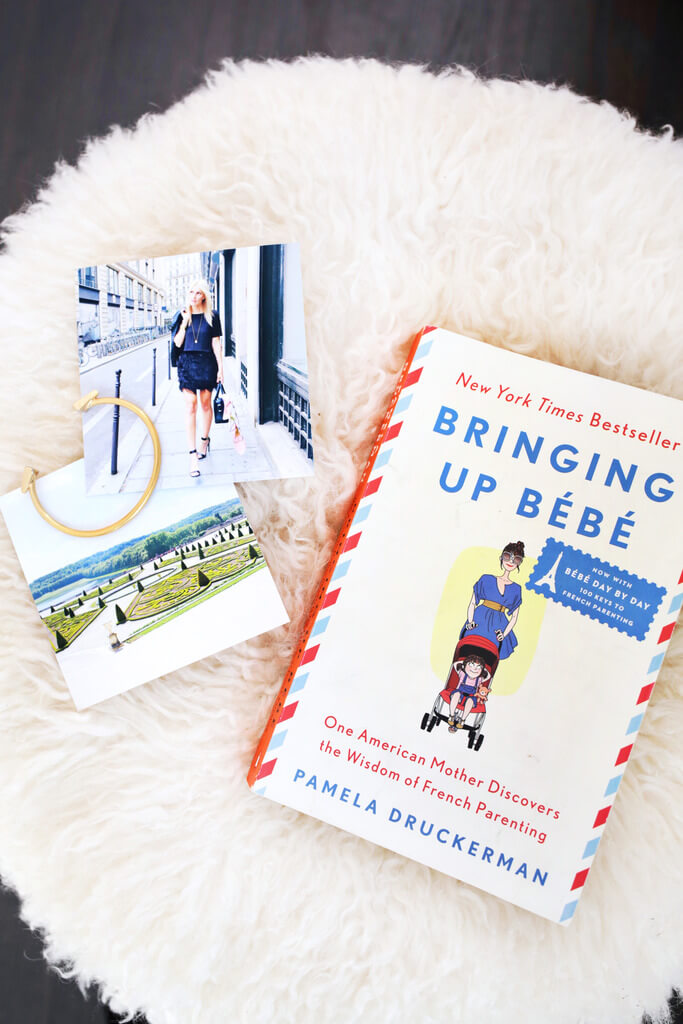 Technically this post title should be “currently RE-reading” because this is the second time I’ve read this magical book. As an ardent Francophile (a lover of all things French) my ears immediately perked up a few years back when I heard about a book called Bringing Up BéBé that compares popular Western (mainly American) parenting styles with the family life of Parisian parents. Completely intrigued I first got the book on CD out of the library to listen to on the drive up to Pennsylvania a few Christmases ago and it’s still one of my favorite books I’ve ever gotten into. First of all, let me highly suggest listening to this book being read aloud because if it’s the same reader that was on my book, all the french words and French-to-English accents are simply delightful to listen to and make it an even more enjoyable experience in my opinion.

This book basically follows a new American mother in Paris (her British husband moved them there for work) as she compares and contrasts her own parenting journey so far with the French mothers around her and the other Americans, Canadians, or simply non-French families she meets or knows from back home. She wonders why she doesn’t see French kids throwing tantrums in stores, how they are able to sit quietly and calmly in restaurants while they wait for food (the same kind of food the parents are eating), and how babies are expected to sleep through the night at just a few months old. The Parisian parents didn’t seem as frazzled as she felt either and she wanted to find out why…

I have to admit that more than anything I’ve ever read or any Mom I’ve ever talked to, it was this book that allayed most of my fears about parenting. I think we’ve all seen and interacted with other people’s kids over the years (starting with those early teenage babysitting jobs for me!) and have a collection of scenarios that you see so often you just assume they are par for the course with parenting and there’s no way around them. “Kids will be kids” sort of a thing. But what I love about Bringing Up BéBé is that the things that I dreaded the most about parenting (never getting any sleep, making separate food for kids for every meal when you hate to cook anyways, not a moment to yourself, giant tantrums, over-scheduling their (and subsequently your) life…) are simply not a part of Parisian parent’s lives. They do certain things on purpose to make it that way. And oh sure, she’s very clear in the book that kids sleeping through the night, learning patience, experimenting with lots of different foods, being able to play by themselves, not interrupting others who are talking are all learned skills and it’s not always going to be a totally perfect system for every child. They are kids after all! They are slowly learning those behaviors the parents see as most important.

I realize now that so many of things I’ve admired in other parenting styles (including my own parents and how they raised us) are pretty much all in this book to some degree. One criticism of the Parisian method is that some feel it’s too “harsh” or “critical” on kids, and while I do see that point at times, I think it’s more the difference between the “everyone gets a 1st place trophy” or the “you’ll get 1st place if you’re in 1st place” mentality. They don’t see it helpful to tell their kids they are over-the-top-amazing at every single thing they do because it’s ultimately not helping the child figure out what their actual talents are. To them, that’s how the real world is so they want their kids to have an accurate assessment of their skills.

One of my favorite parts of the book is how the Parisian women never see themselves as only being “Mom” once they have kids. It’s another hat they wear, an important one absolument, but certainly not the only one. It’s still crucial to them to feel like a sexy, badass woman as much of the time as possible and keep their relationship with their partner as a giant priority. They don’t even have a term for “date night” in French (they even had to change the name of the Tina Fey/Steve Carrel movie of that moniker when it premiered in France). The term implies that you switch out of Mom-mode into Sex-Kitten mode for a few hours a month and they just don’t get the concept. To them, they may have children, but they never mentally switched out of that mode to begin with. It’s also basically the trickle-down belief that a happy and healthy relationship between the parents (and scheduled time away from the kids to keep that connection strong) will ultimately benefit everyone in the family.

It’s true that the French have some unfair advantages (their government-subsidized creche daycare menu for infants-toddlers sound like the menu to the fanciest restaurant I’ve ever been to). While free daycare makes it that make it much easier for them to either choose go back to work (which most women do) or at least get some free babysitting while they run errands or make a café date, most of the things they value and teach don’t rely on such potential perks that they may have over their American counterparts. All in all, I think I loved this book because it made me feel like I have more choices for a parenting style that seems to fit our personality better than other philosophies we have seen. Of course, any parenting style you haven’t used with your actual kid yet is to be considered with a grain of salt for sure, but it is comforting to think of all the Pierres and Madelines halfway across the world that are using their manners and patiently waiting to devour their vegetables as I type this post…À bientôt mes amis!!

10 thoughts on “Currently Reading…Bringing Up BéBé”