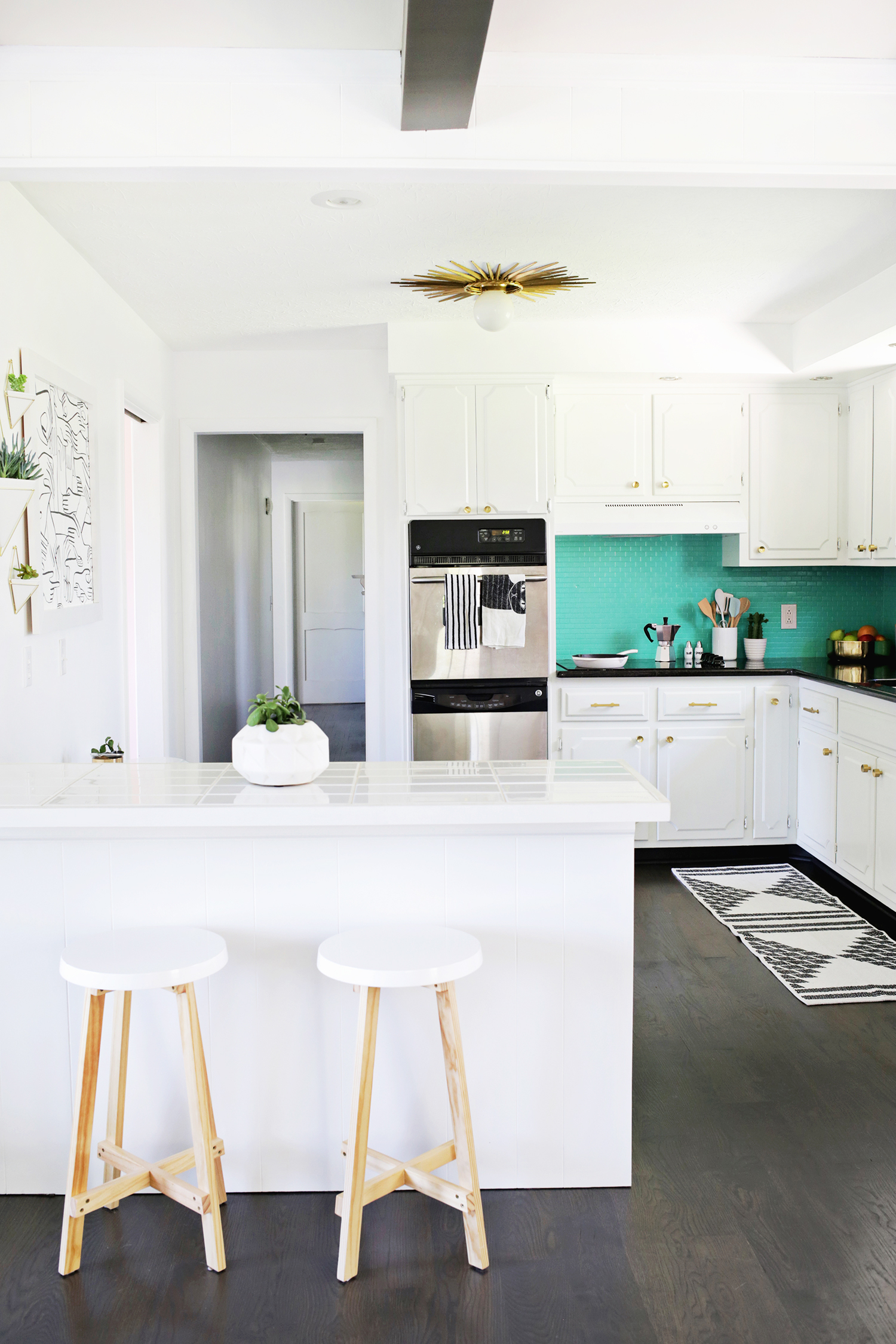 I’ve gotten on a pretty good roll lately of finishing rooms to where I can show you my before + after room tours, and today we are moving onto one of the most used rooms in the house – the kitchen! Technically, this is “phase 1” of our kitchen remodel as we have some big plans that we are saving up for, but I’ll tell you more about that at the end of the tour. Ready to see what it looked like before??

As you can see, there are a couple of BIG differences in the space. I’ve painted cabinets before in our last kitchen, but all they needed was a light sanding to rough up the surface and I could paint right on top. These cabinets, however, had been poorly refinished at some point, and there were globs of polyurethane dripping down the doors. So every surface (front and back) had to be sanded down to the natural wood before we could paint. It took almost 3 days, and I thought it would never end. It was probably the hardest remodel project I’ve ever done (if you don’t have to sand down to the wood, it’s really not that bad), but once it was done and I knew I had saved a couple of thousand by doing it myself, well, I guess it felt worth it! But barely…

We also had that tile flooring removed (I really was not into the tile choice) and put down oak flooring instead (that’s what’s in the rest of the house) and stained it to match with the custom stain color I created. The new floors and bright cabinets make such a difference! 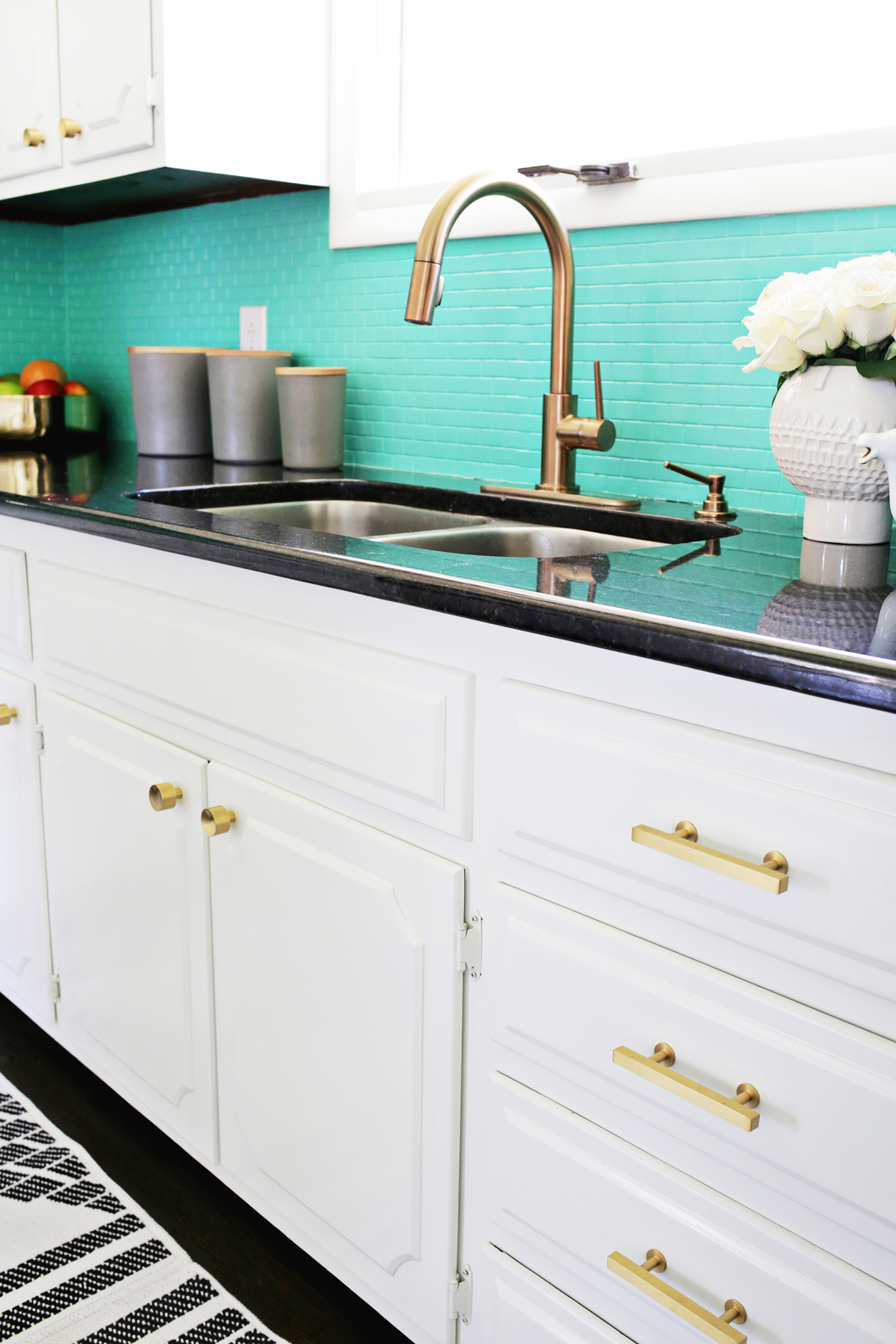 I wanted to do brass fixtures and hardware in the kitchen to update the feel, so I got these beautiful brass knobs from Schoolhouse Electric for the doors and these brushed brass pulls for the drawers. We had a pull down faucet in our last kitchen, and while I loved the idea of it, it was a terrible faucet and I didn’t know if I wanted another one if they were all that bad. Elsie bought this champagne bronze faucet for her kitchen, and it only took me using it one time to be converted back to the pull down idea. It works so well and is lovely to look at! 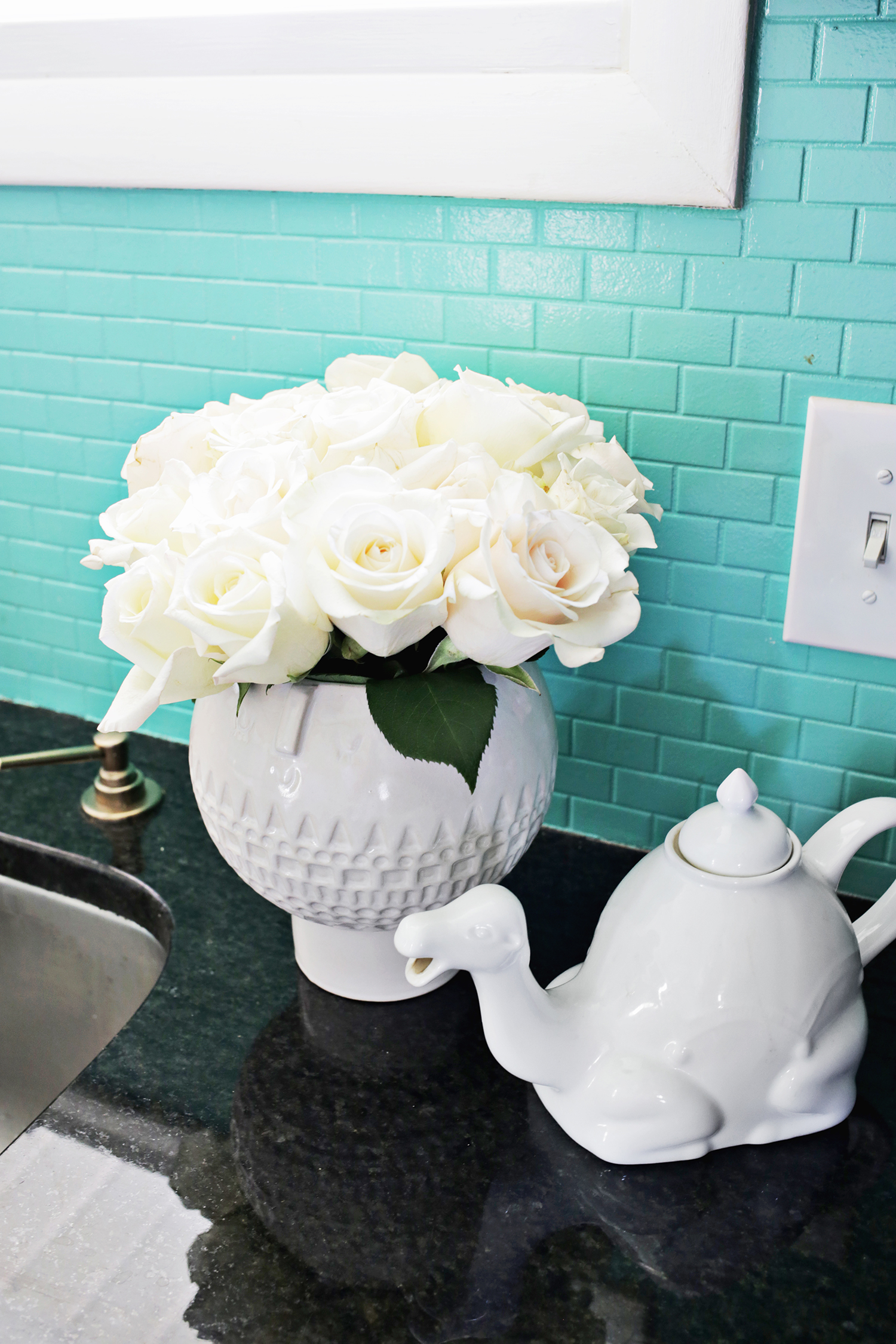 That’s my camel teapot I bought after my trip to Israel. His name is Bruce. 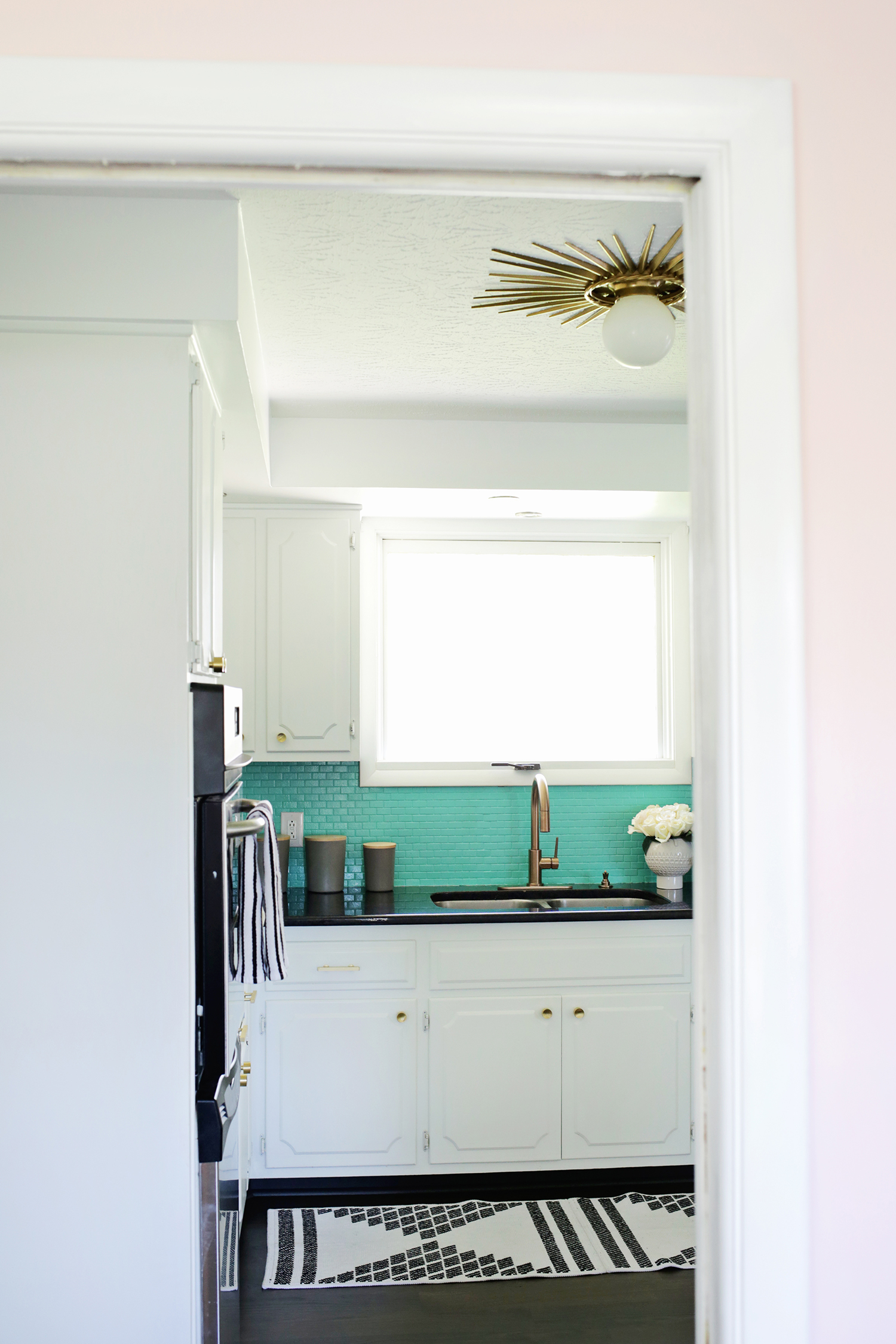 Since I couldn’t find a runner short enough for that spot in front of the sink, I attached two of these bath mats together with rug tape that I’ll replace after each washing (or you could sew them together… just feeling lazy!). 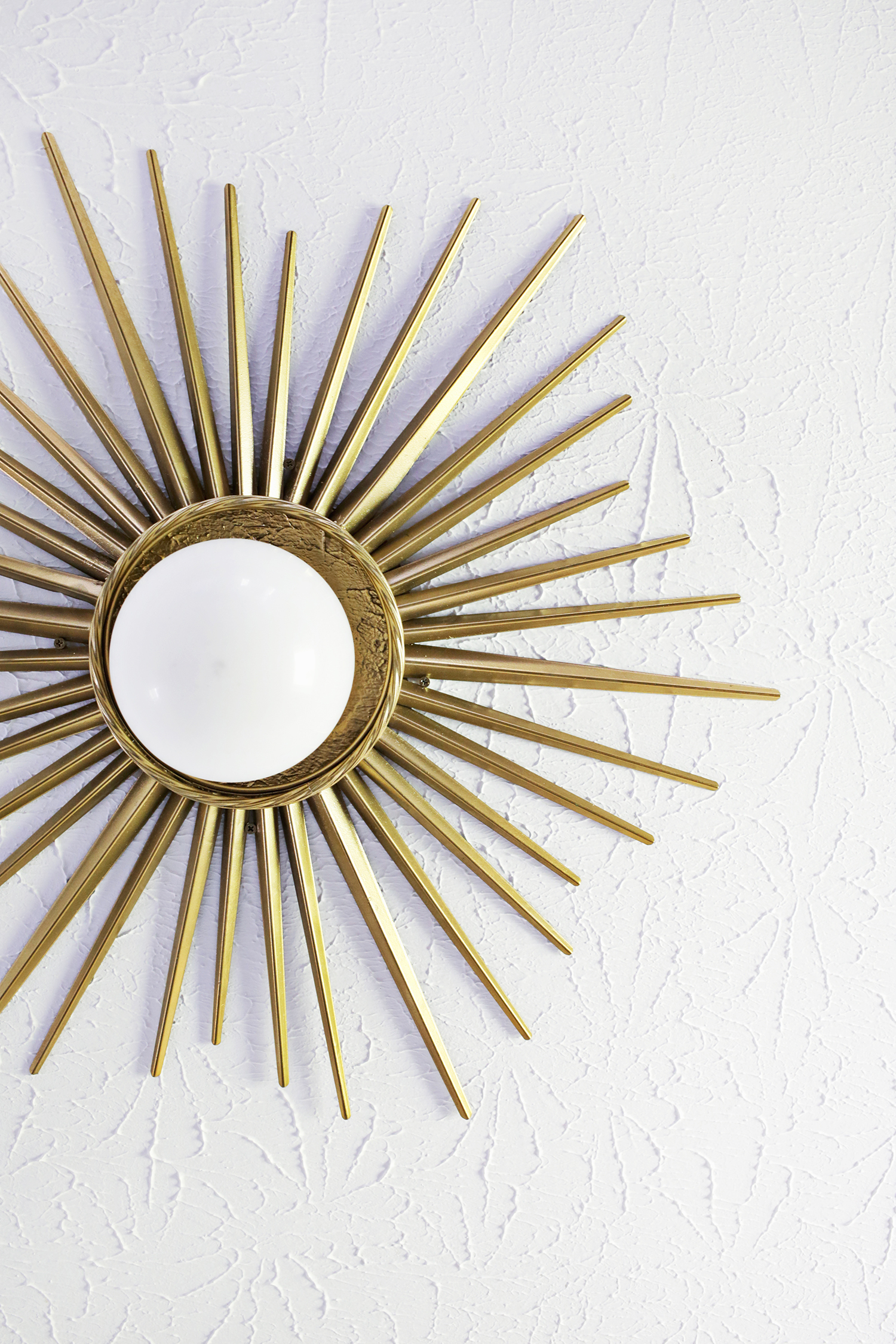 I love how this starburst light medallion DIY adds some interest to the ceiling while keeping with the overall mid century and gold theme. It was so easy to make, and I love how it turned out! 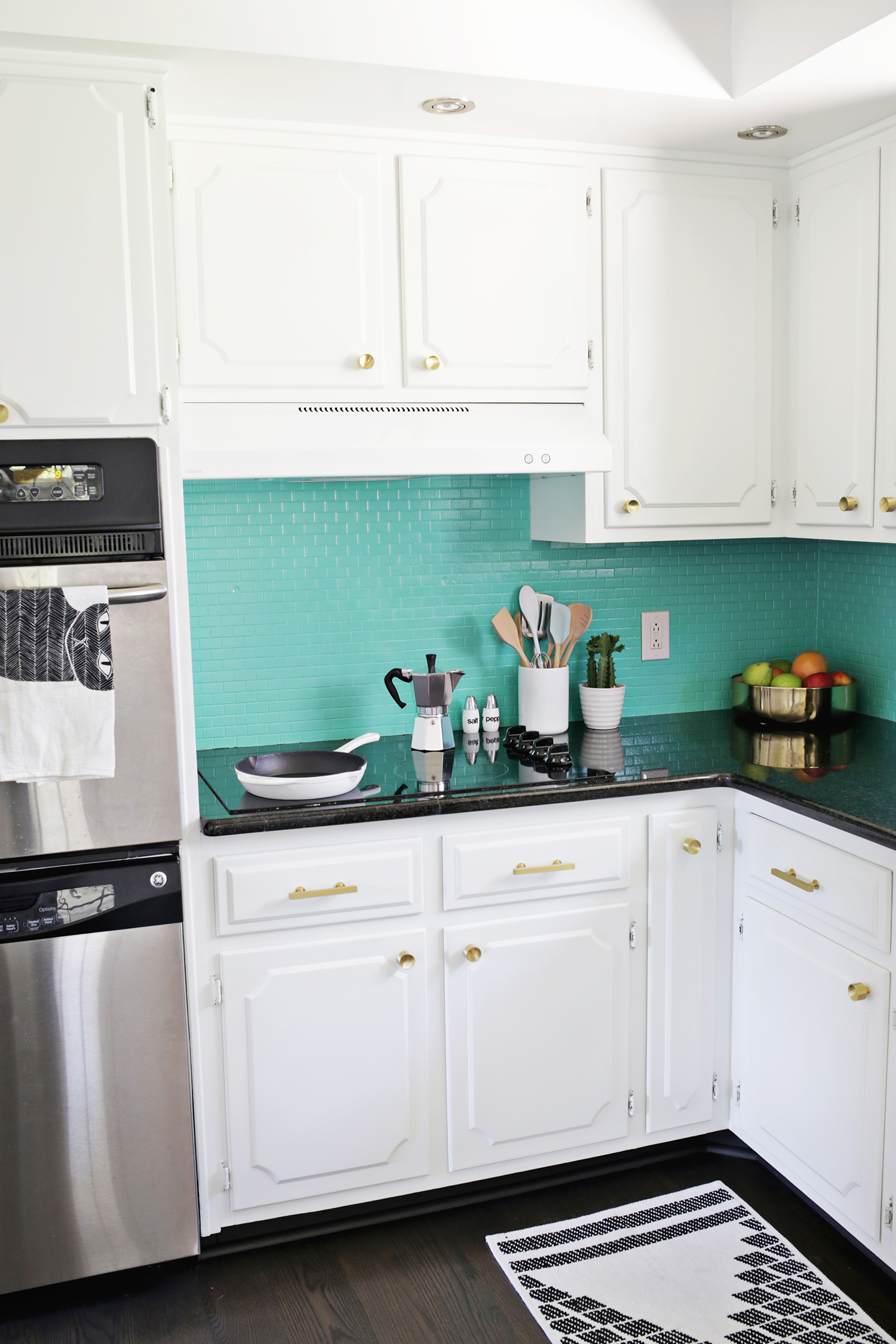 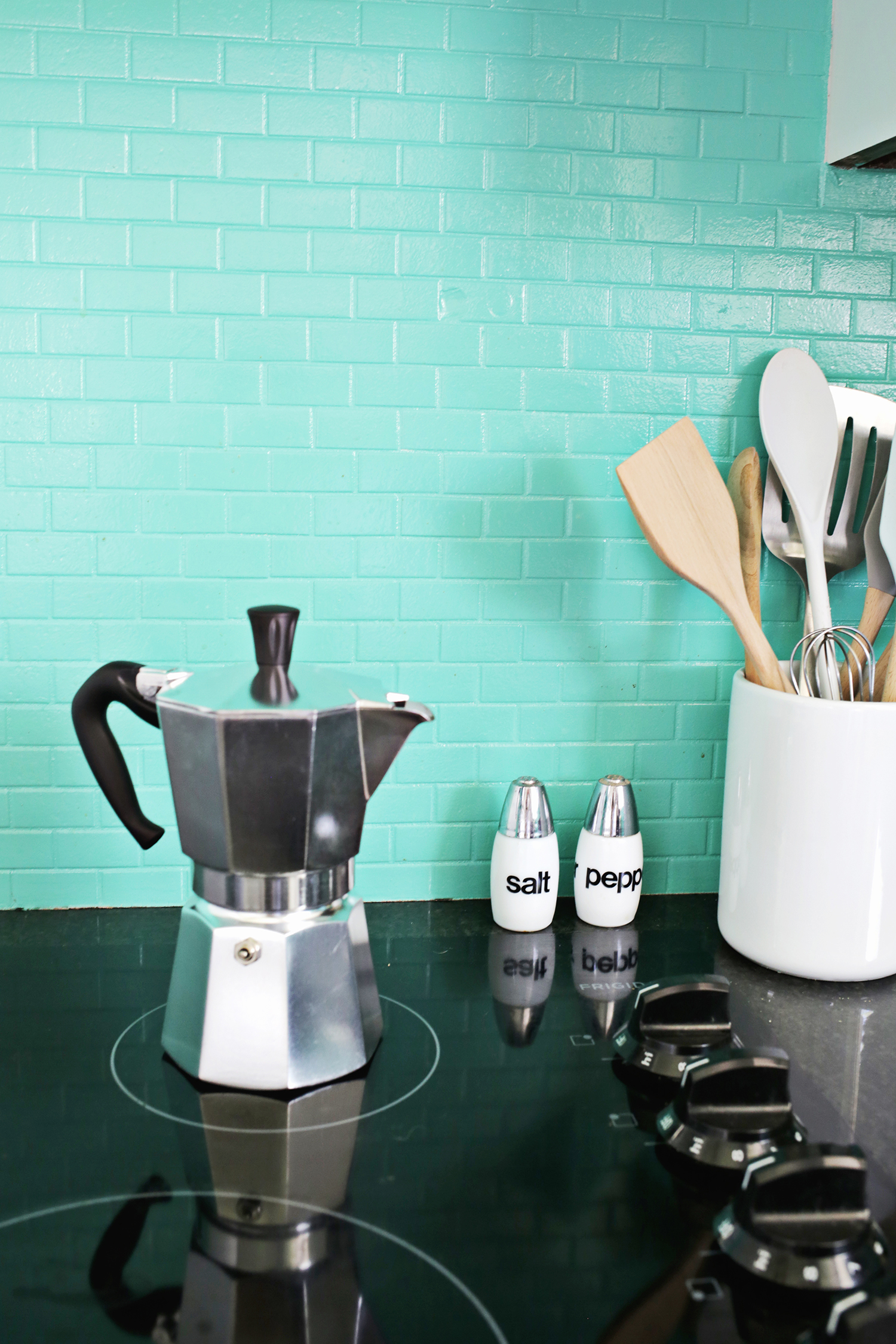 Since I knew that we eventually wanted to replace the backsplash in our bigger kitchen renovation, I decided to take a chance on painting the existing brown backsplash to update the kitchen in the meantime without spending a lot of money. I’m happy to say that so far, the paint is holding up perfectly and it’s nice to have a little pop of color against all the black and white. 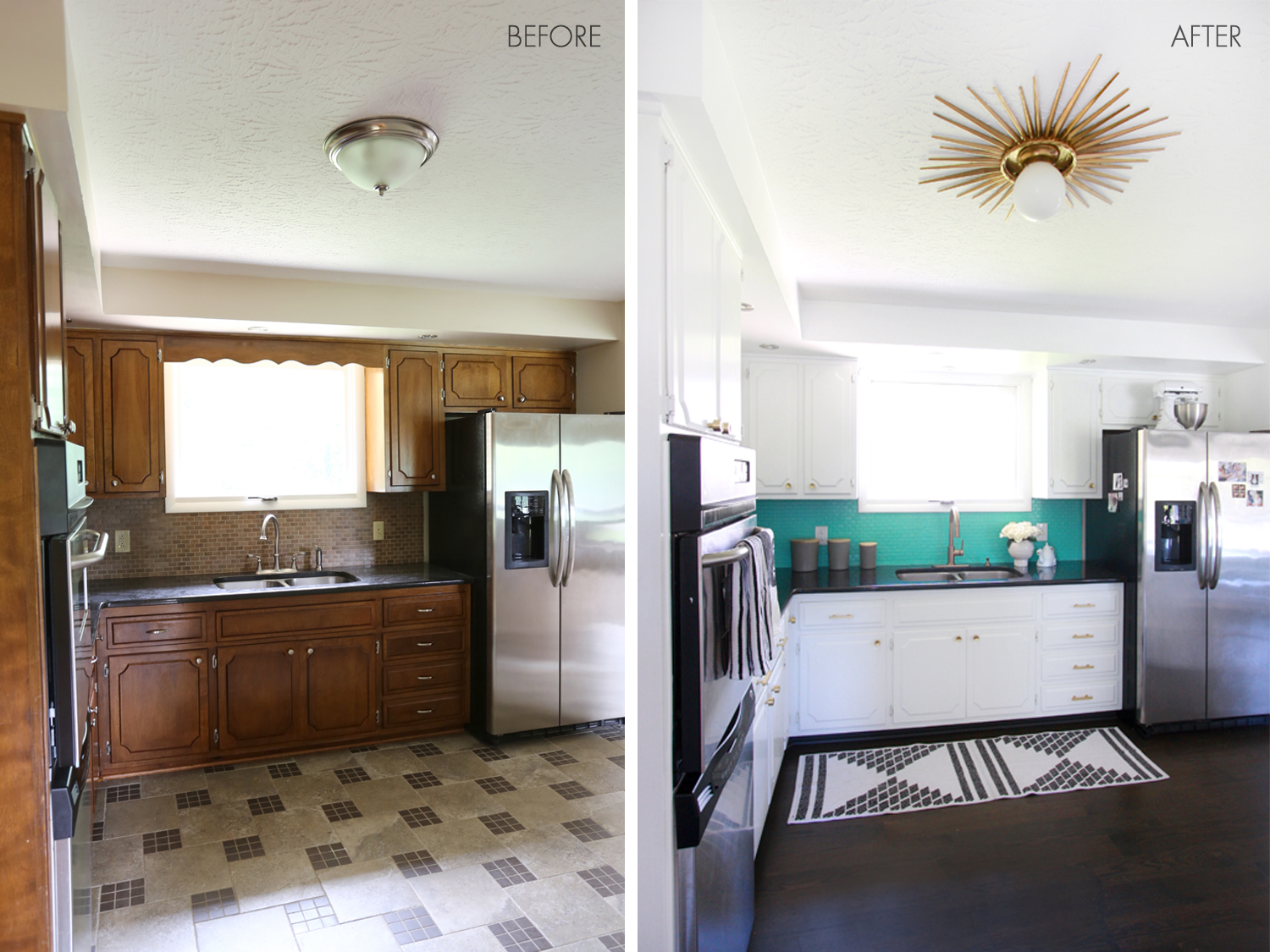 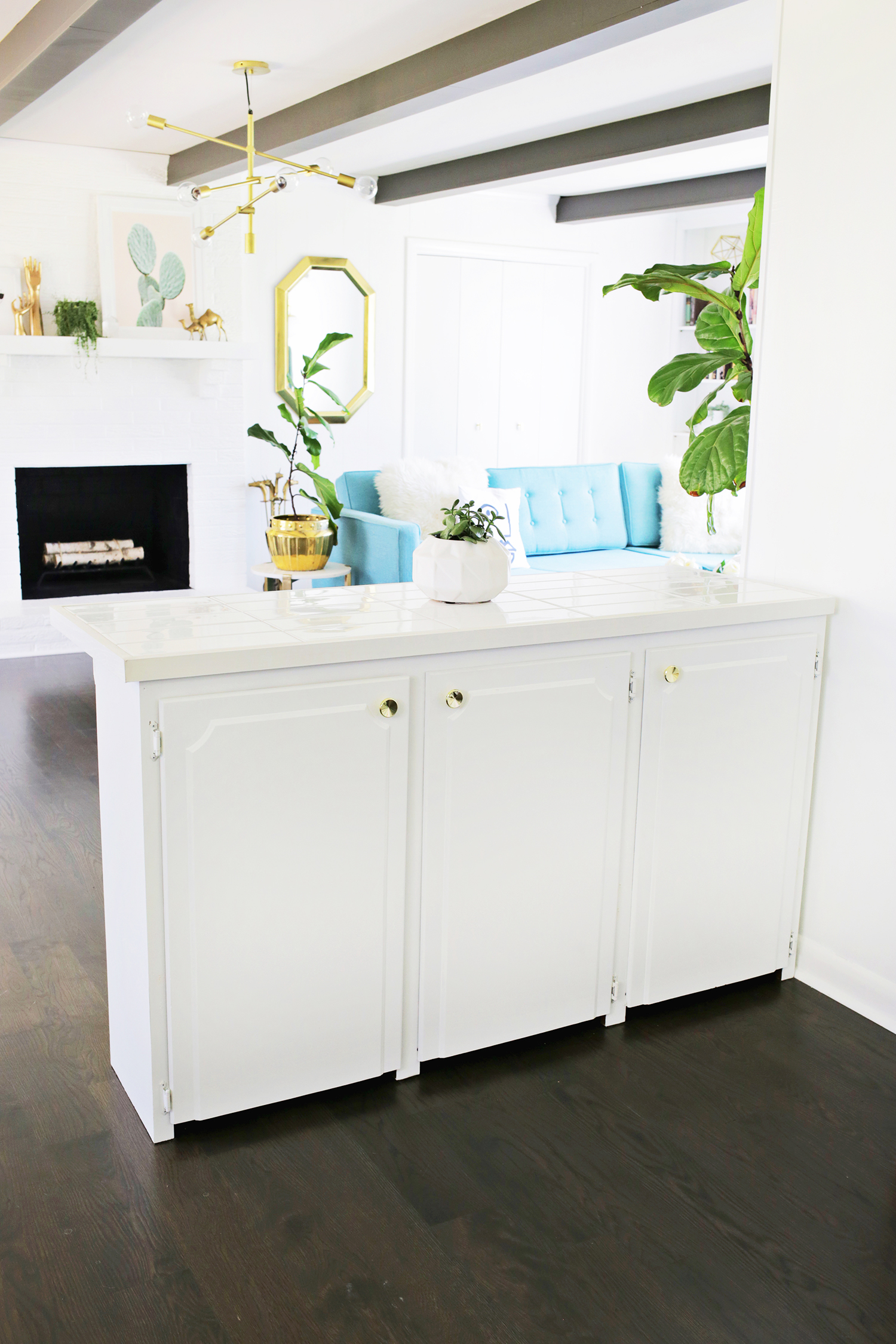 This cabinet peninsula used to be bar height instead of counter height, which didn’t make a whole lot of sense to us. There’s not a lot of counter space for prep work and cooking, so we would much rather have a usable counter-height peninsula than a higher bar one. So we had it shortened down a few inches and it’s much more useful that way. Once we added in the darker floors, the original black granite countertop seemed too visually heavy, so I replaced it with a white tiled DIY countertop instead. The shorter height with the white paint and tile really makes that area feel a lot lighter. 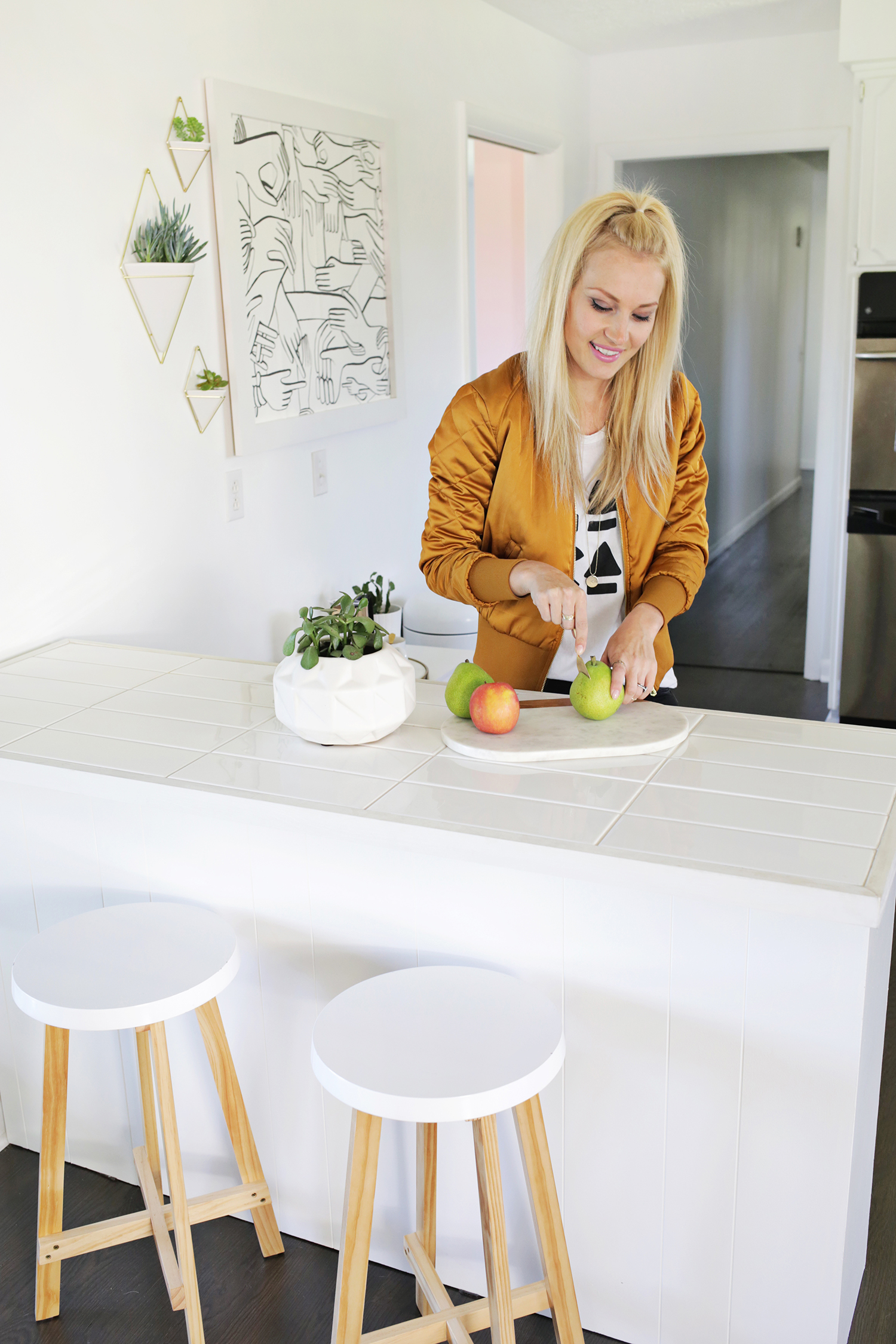 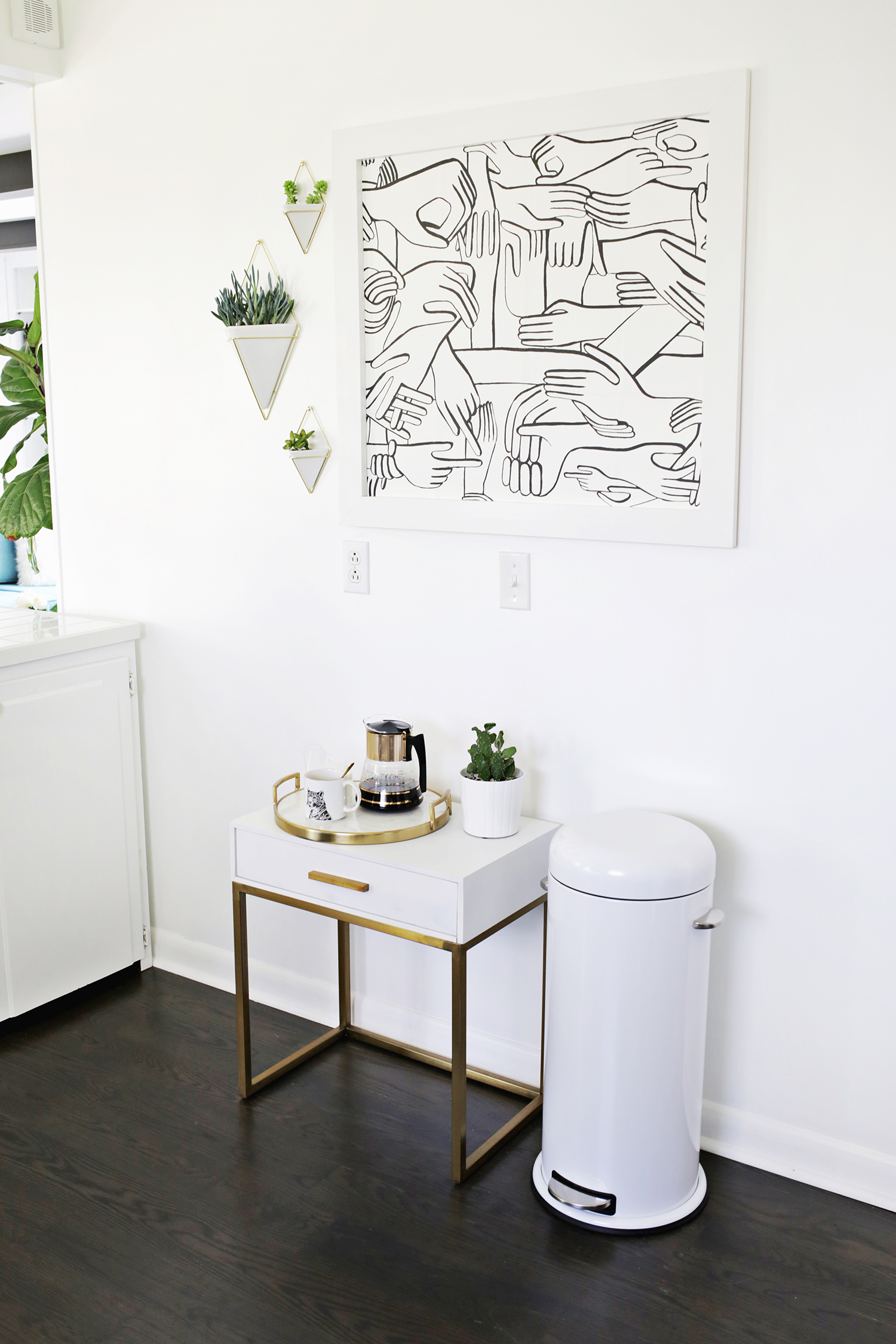 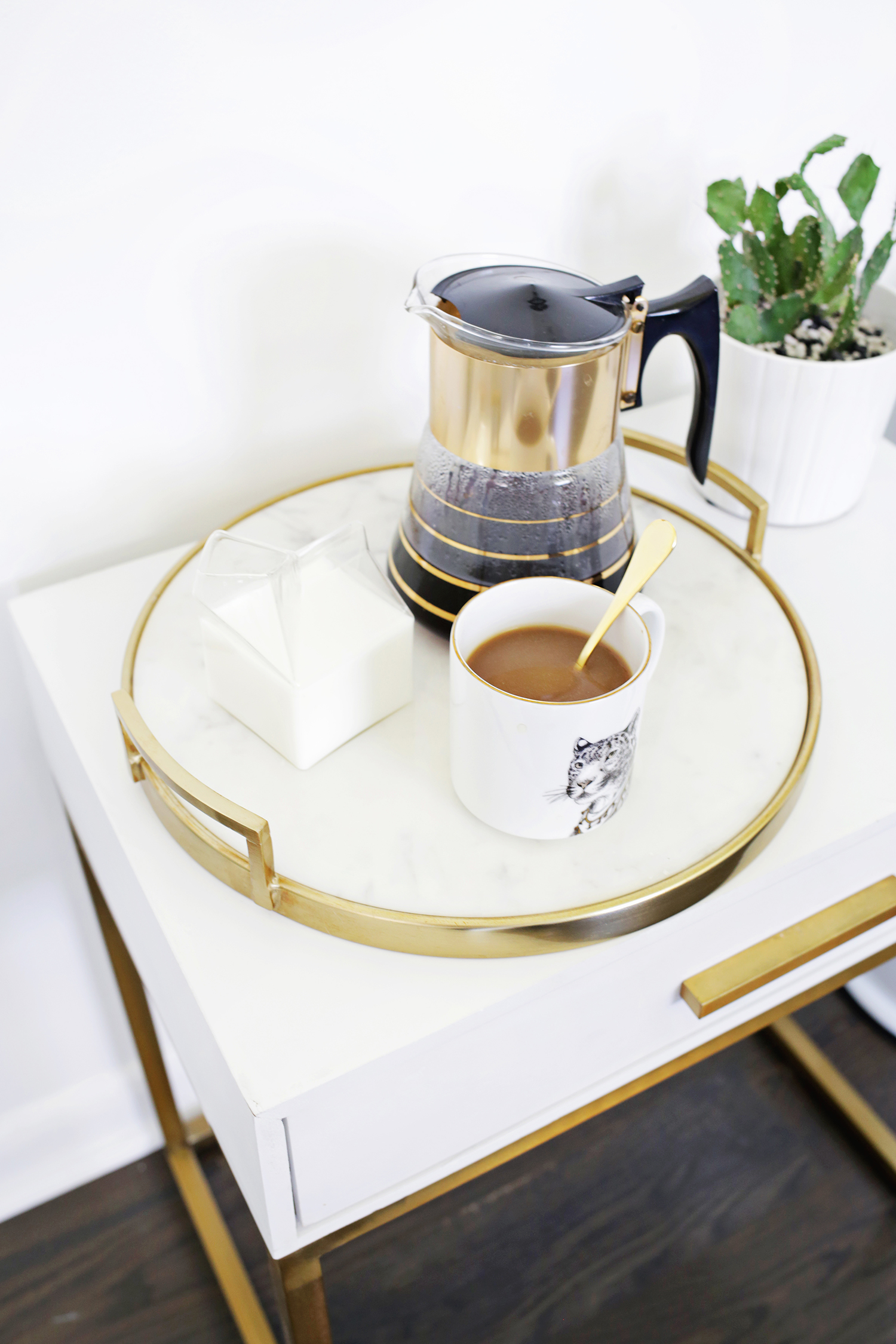 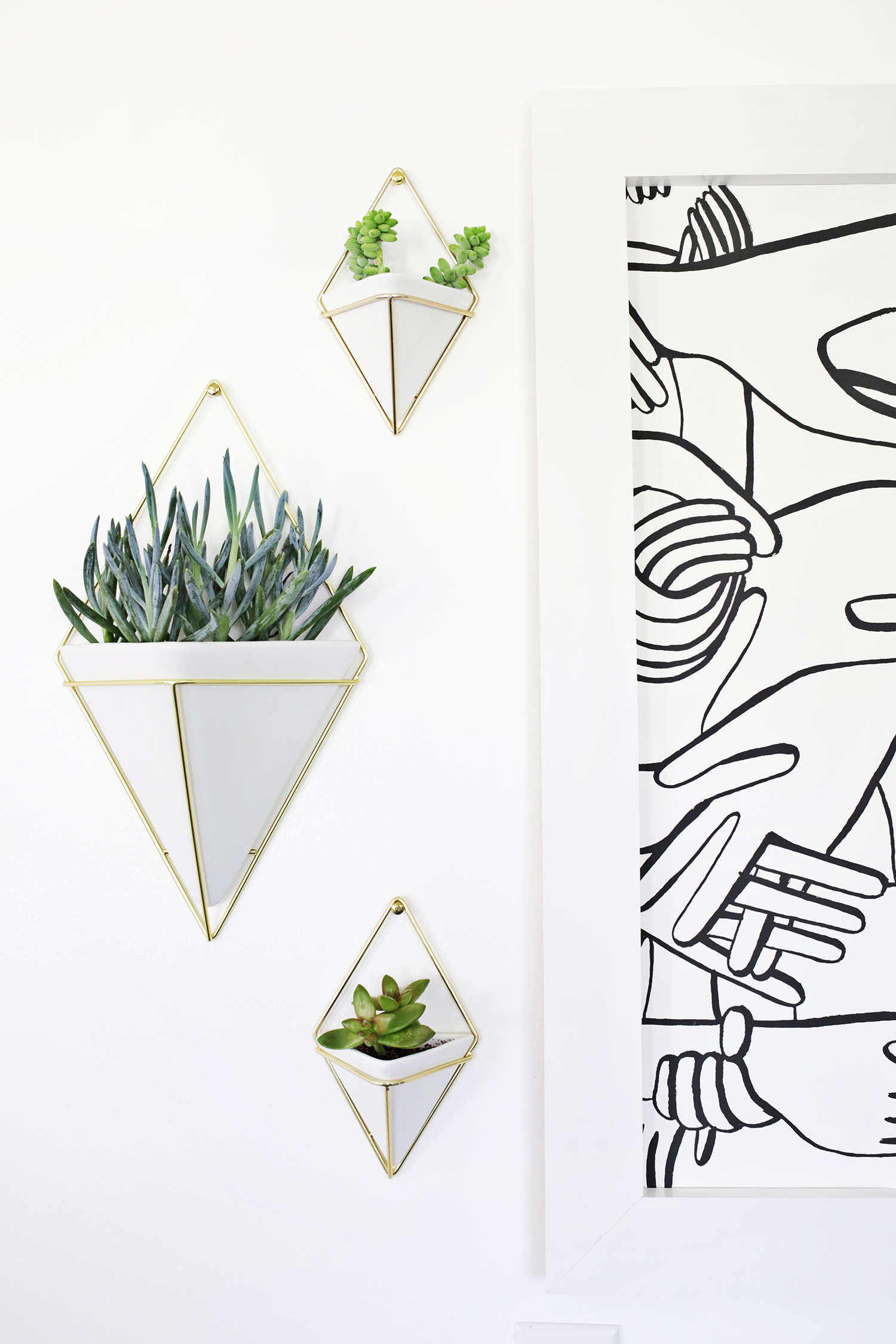 I love this framed wallpaper sample that I hung up a few weeks ago. The black and white pattern is perfect for the space and the wall planters help add some greenery as well (side table, serving tray, and trash can from Target, BTW). 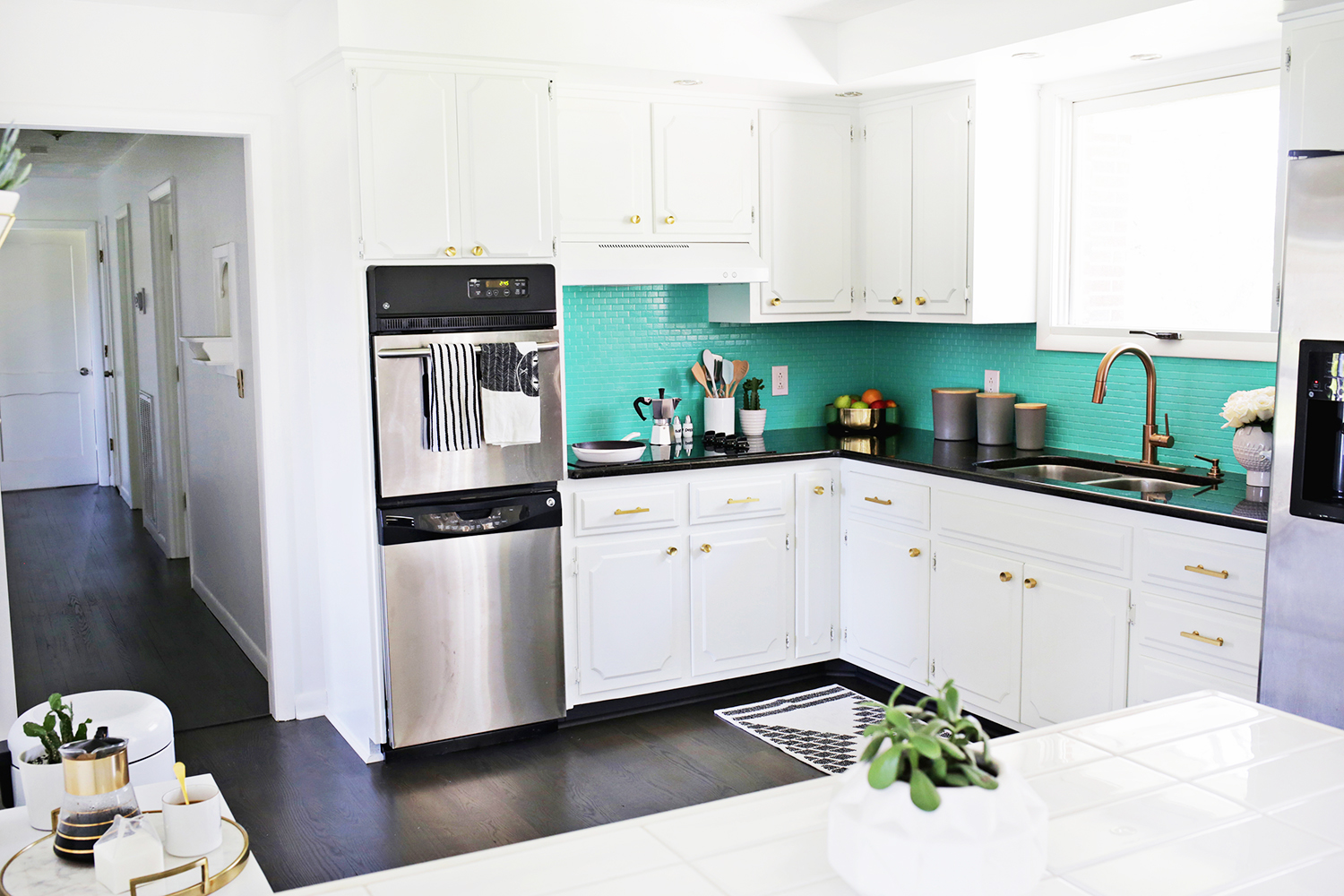 So, you may have heard a little bit of complaining about prep space for cooking. We have about 2 square feet of prep area between the cooktop and the sink in that corner. We would love to add some more countertop real estate soon. The tiled countertop is great for setting purses and mail on but not so good for food or messy substances with the white grout lines, so we’d like to eventually expand the peninsula to be an “L” shaped countertop that goes along the wall where the coffee station is now. That will give us more room for cooking and more cabinet space underneath. Right now all our food, spices, and baking supplies are in the peninsula, which only has two shelves and is less than a foot deep. Everything is stacked 3 rows high and all falls out when you open the doors. Let’s just say that this phase 1 is SO much better than when we first moved, but I’m looking forward to some more improvements!