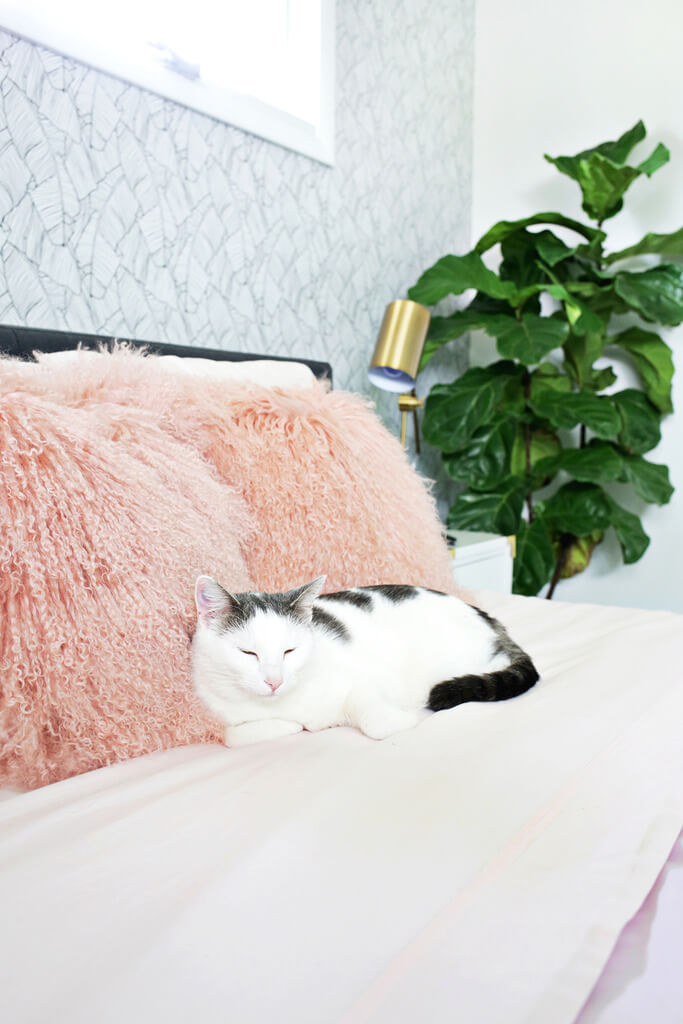 A: Good question! How to keep your cats away from houseplants is probably the question I get most often online or on Instagram whenever I show areas of my house that have plants (which is pretty much every area!). If you would have seen my house about 3 years ago you would have noticed that there were no plants in the house. None. I think I just had the mindset that inside plants were for California houses or the waiting room at the dentist’s office. Anyways, once I saw how great they can look (and how much life they add to a space) I really wanted to add some plants into our house. I didn’t know at first though that there is a long list of plants that are toxic to cats (see the list here) and so I looked high and low to find the plants that were safe to have in the house. At that time we only had our kitty Charlie but I noticed something pretty quickly about Charlie and the plants—she didn’t care about them. They might as well just been a new piece of furniture or decorative object as far as she was concerned. No interest at all.

Since her lack of plant attention was so low, I decided to try buying a cactus that was on the toxic list and only have it out when I could watch her to see if she was interested in the plant, and big surprise, she wasn’t. I basically would do this method any time I got a new plant for a while— only have it out when I was around and just watch her to see if she was interested. Sometimes she would sniff it (as most cats will do with anything new in a room), sometimes she would try rub her face on the planter (a sign of friendliness), but after that first introduction, she just acted as though it wasn’t there. I did the same thing when we got Mac, our second kitty, a few years later and thankfully he was just as uninterested in the plants (although every so often he does like to dig in the dirt of the large planters—he loves digging outside). Now, I know that I’m pretty lucky to have two cats that are uninterested in houseplants, but even if your kitty will eat every green plant in sight, don’t worry! There’s still plenty of things you can do to have happy healthy kitties and lots of greenery around the house! 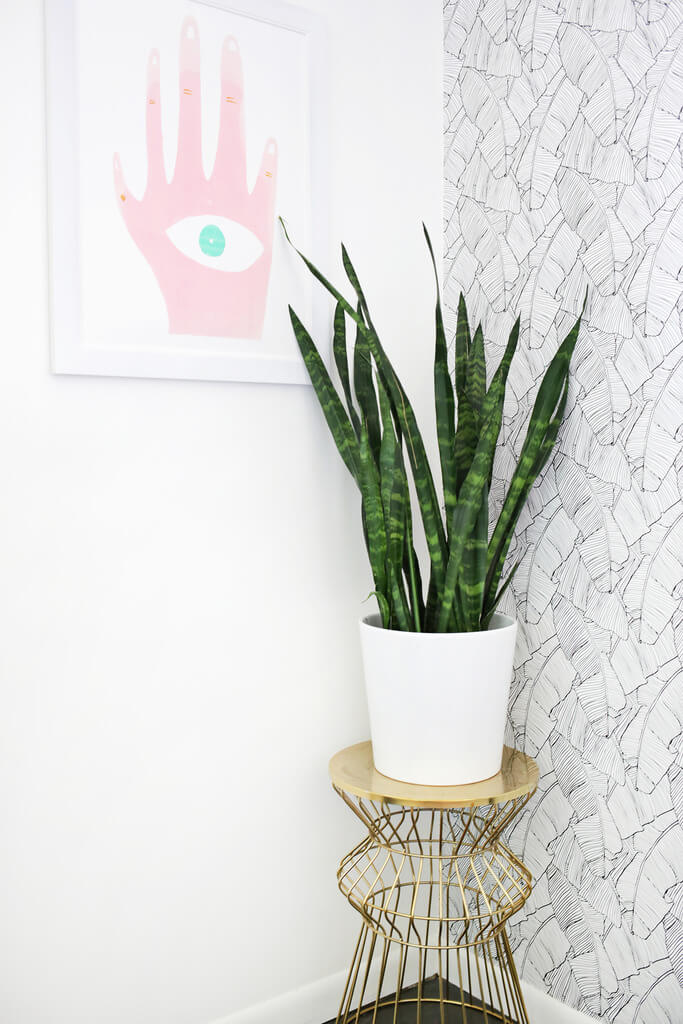 Plant Stands: Plant stands are a great way to get plants up off the floor and add some decor to an empty corner or wall space. To help keep plants away from kitties, have the plant in a large planter that takes up most of the top of the planter and don’t place it next to a table or chair so that the kitty doesn’t have anywhere to stand and bother the plant. This is probably best for kitties that are somewhat curious about plants, but not aggressively so. 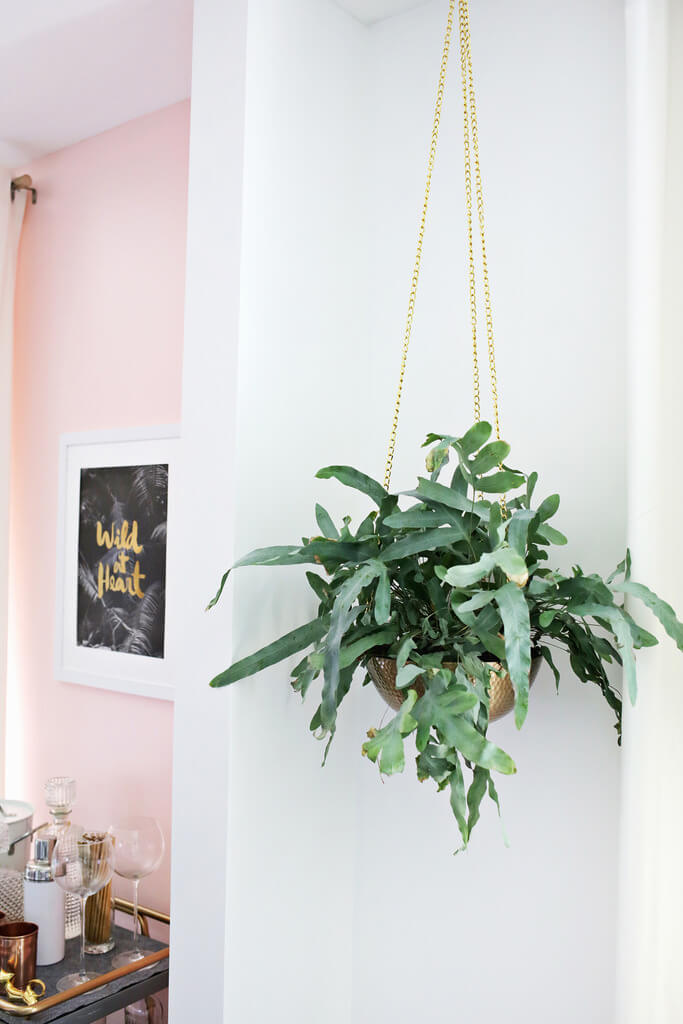 Hanging planters: Hanging planters are a great option for plant-hungry kitties. If they can’t get to it, they can’t eat it! They also work really well to fill an empty corner of a room in a grouping of 3 or 5. Just make sure to keep plants well watered and check often in case any leaves drop off. 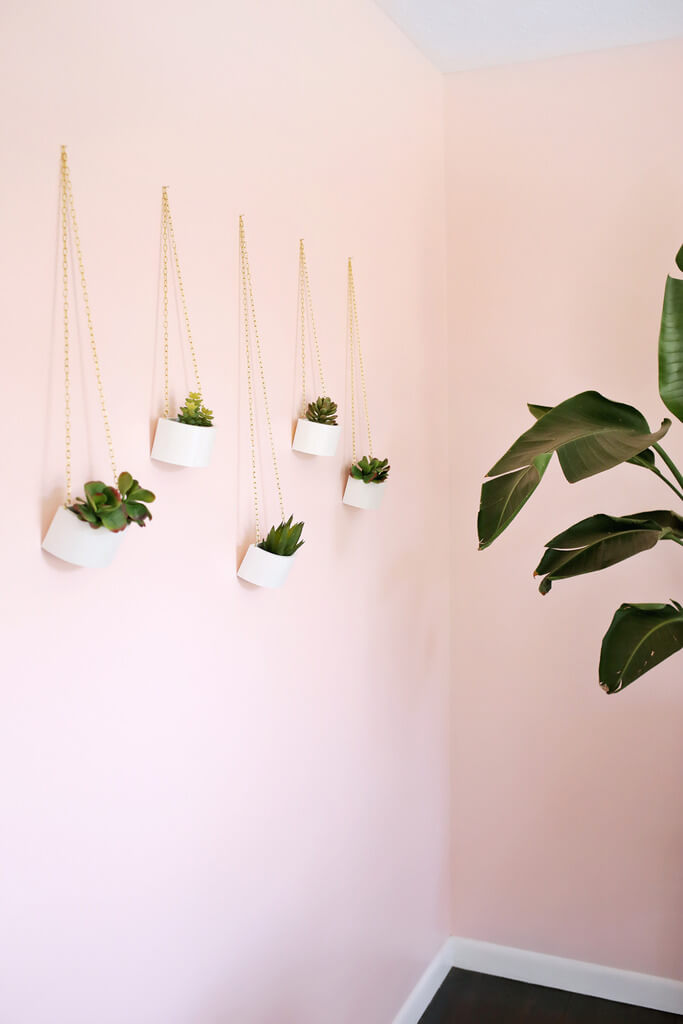 Wall Planters: Another good option for kitties that love plants. Wall planters are a nice decor choice when you have a longer area to fill or just want to have a low profile planter next to a print or pice of art (they don’t stick out as far from the wall as a traditional hanging planter would). 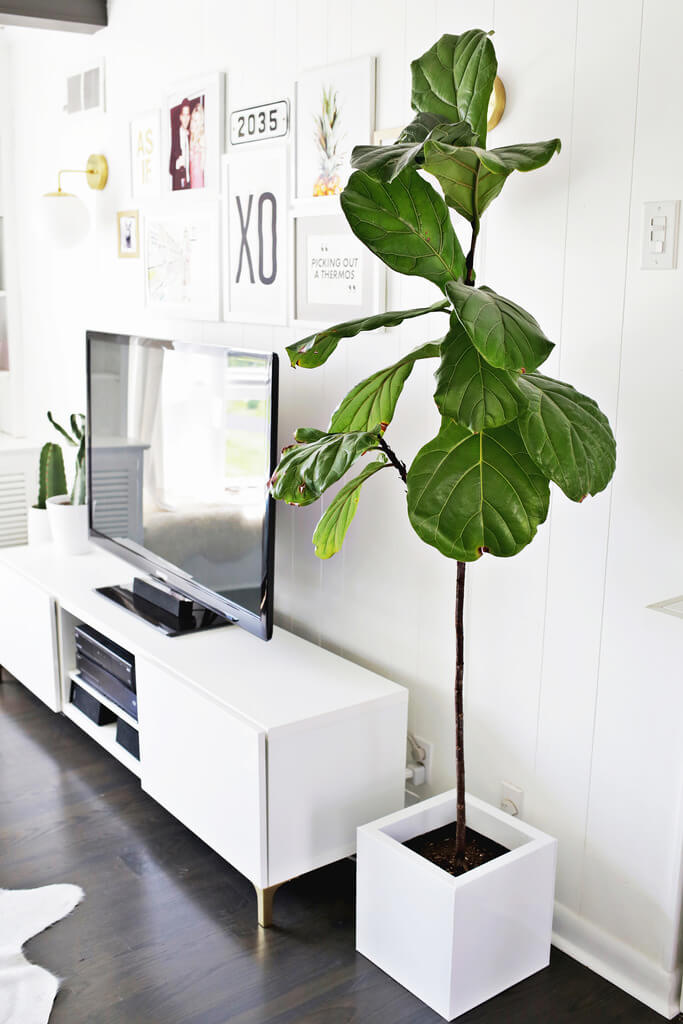 Plants with High Leaves: There are some larger plants, like a fiddle leaf fig, that you can trim off their bottom leaves to create more of a tree look and the leaves become too high for kitty to reach. Again, this would work best if it’s not next to other furniture for them to stand on to reach the leaves from another angle so keep it solo away from anything they could climb. Also, this assumes that your cat is only interested in the leaf parts of plants like most cats are and not a bark-like tree stem, but don’t do this option if your cat would just chew on the stem for some reason! 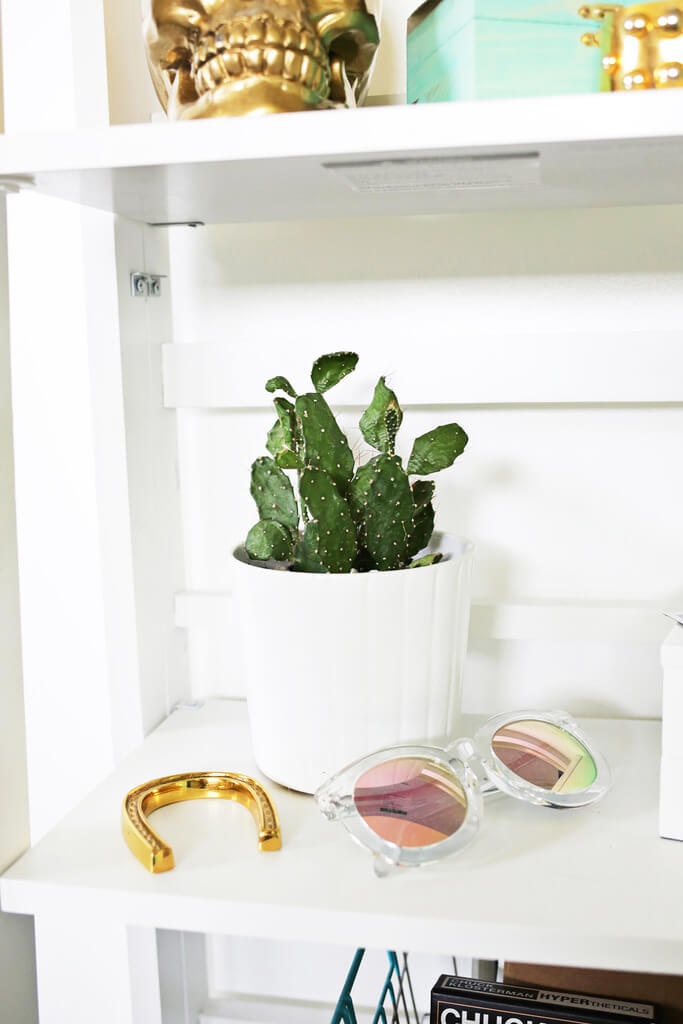 Faux Plants: For the most aggressive cat, you may just have to do faux plants if they just can’t leave the real thing alone! I actually use faux plants all over my house in wall planters, on bookshelves, plants that are hard to reach to water, or planters that leak easily. They have been making some awesome faux succulents lately and I’ve seen them at pretty much every craft store and even Target. I even saw some faux fiddle leaf fig trees at the mall the other day that took me a while to tell that they were actually fake. You could also do toxic plants in places they can’t get to (like a hanging planter) and faux plants in places where they kitty can access them. Just plant them in real dirt and that helps a lot to fool your houseguests into thinking that they are real. 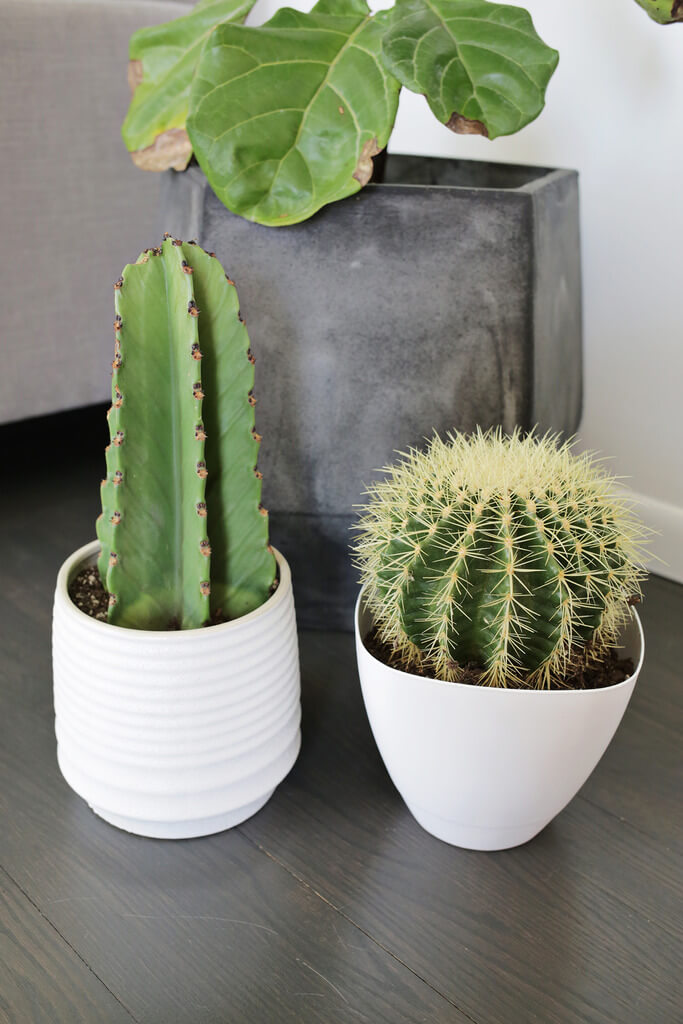 Side note: If a real cactus is going in a location where it could be touched or bumped by a cat (like on the floor or a dresser), I only use the ones with certain types of needles. I don’t really like the cactus with the teeny-tiny needles anyways since they always come off in your fingers (and I especially didn’t want them to be in their fur if they brushed by one), so I only buy the ones with the really obvious thick needles that don’t eject from the cactus (like the golden barrel cactus on the right) or the ones that don’t really have needles at all like the chocolate drop cactus on the left (which has more of a really short thorn than a needle). That way, if their tail swishes in the direction of the cactus, it’s not something that would be stuck in their fur when they went to clean themselves.

My cats also spend hours outside everyday (which is a place that is full of toxic plants for sure), so I do have to trust that their feline instincts will guide them to not eat the wrong thing, avoid dangerous animals, etc. when they are out of my eyesight. I guess I feel good knowing that they at least aren’t interested in eating plants when inside and hope that carries on to their outside adventures as well. Actually, when inside, I have to watch my own food more than anything else! I’ve definitely left the room for a moment only to come back and find Mac with my piece of pizza in his mouth. Once he even took a pieces of toast straight out of the toaster when it popped up!

Anyways, hope you found some ideas to help add some greenery to your space in a way that you and your kitty can enjoy!

5 thoughts on “Q: How Do You Deal With Having Houseplants and Cats?”