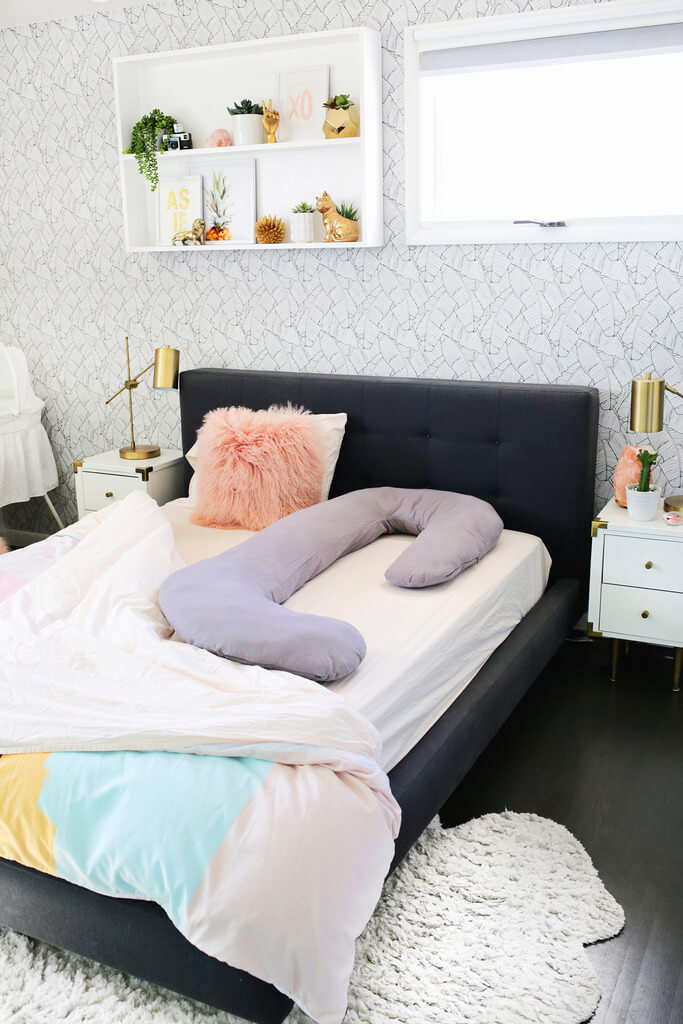 So, if you’ve ever been pregnant (or currently are) then you are already aware of the extreme need for a pregnancy body pillow. Maybe that sounds a tad overdramatic, but I didn’t quite get what all the fuss was about until I got my own and just having a long pillow to drape your body over and put between your knees can really help with trying to get that pregnancy sleep while you still can.

I’ve been wanting to switch over to all organic or non-toxic options when it comes to where I sleep and being pregnant has made choosing what I’m breathing in all night all the more important. I really wanted an all organic pregnancy body pillow and while there are “organic body pillows” for sale out there, I realized that as I read the product description carefully almost all of them are actually regular poly-fil type filling with only an organic cover. Not good enough Bro. I did find one that was organic inside and out, but it was expensive and just a long straight pillow, not the C-shaped kind I was looking for. I was really trying to avoid an extra project at the moment so I caved in and just bought a regular pillow thinking, “How bad could it be for a few months?” As soon as I pulled the pillow out of it’s plastic bag, the chemical smell was overpowering to say the least. I had to let it air out for a while before even trying it out, and while it was comfy, I couldn’t get over the fact that I was breathing in all that gross smell all night long. Blech.

SOOOO, I decided that if I really wanted my C-shaped all-organic natural pillow, well, I was just going to have to make it myself. Here’s what I did in case you want to make one too! 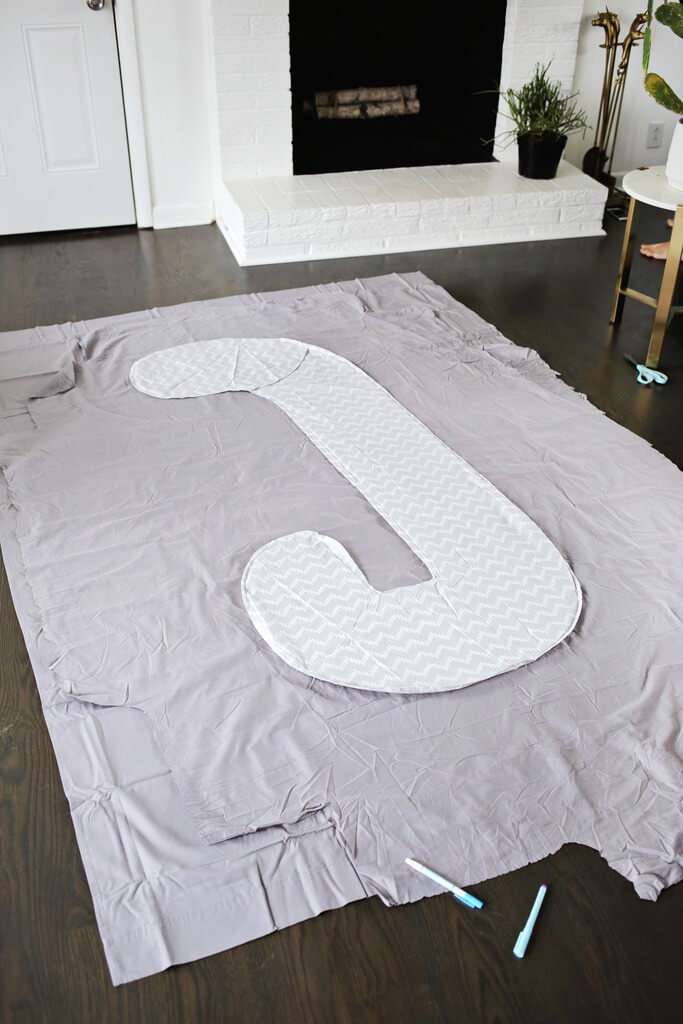 Since I already had the pillow and pillow cover from the chemical smelling pillow, I used it as a partial template before I took it back to the store (at least it would do me some good!). Before tracing it, I laid on it for a bit to decide which parts I wished were longer/shorter/fatter/smaller so I could adjust the actual shape and make the pillow that I really wanted. If you don’t already have a pillow that you’re replacing to trace, you can get a pattern here or here or search the net for one that’s more your style (preggo pillows come in different shapes and configurations). 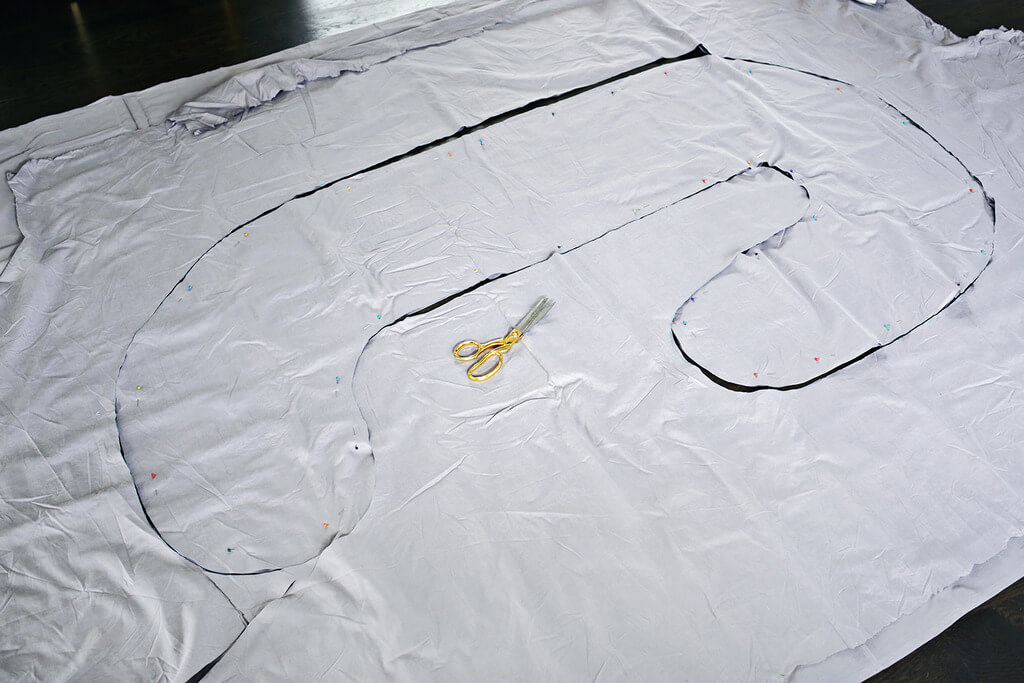 I bought an organic cotton sheet set to use as the fabric for the pillow cover and just flattened out the fitted sheet to use as one side with the flat sheet as the other (just pin them on top of each other so you only have to cut your shape once).

A full size bed set was large enough to make the pillow but if you want to also make a washable cover to put on top of the cover that holds the filling, buy a king set so you have enough material. I pinned my cover together around the edges after cutting my shape out and I was ready to start sewing! 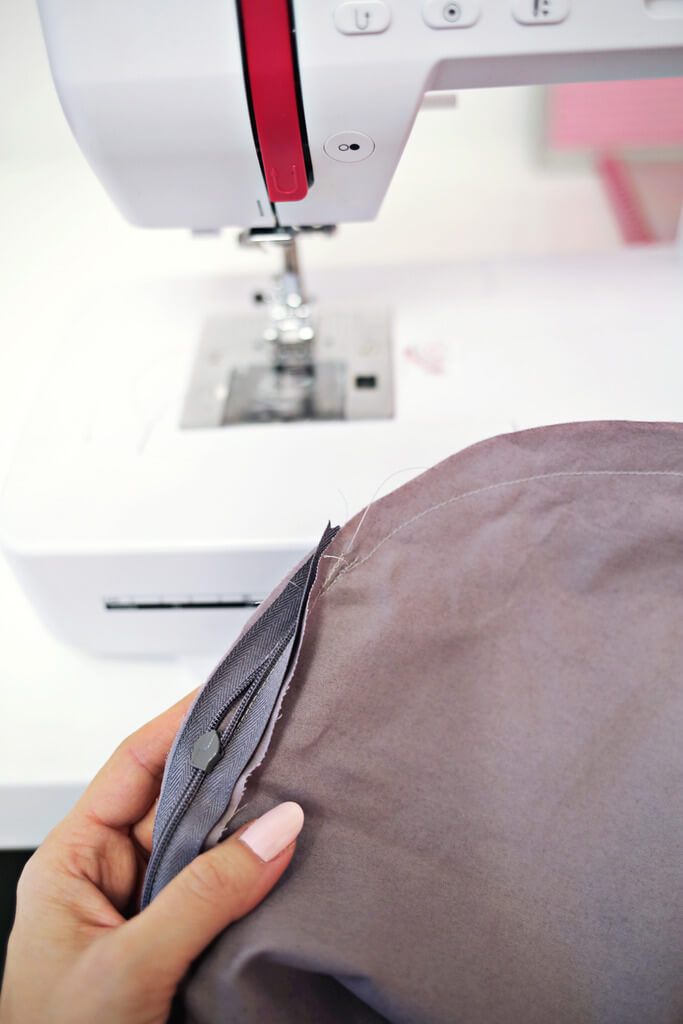 To make it easier to stuff the giant pillow, I first installed two zippers into my pillow (one at the top and one at the bottom). I figured if I ever wanted to just adjust the stuffing amount at the top it would be a giant pain to only have a zipper on the bottom and vice versa, so that’s why I did two. 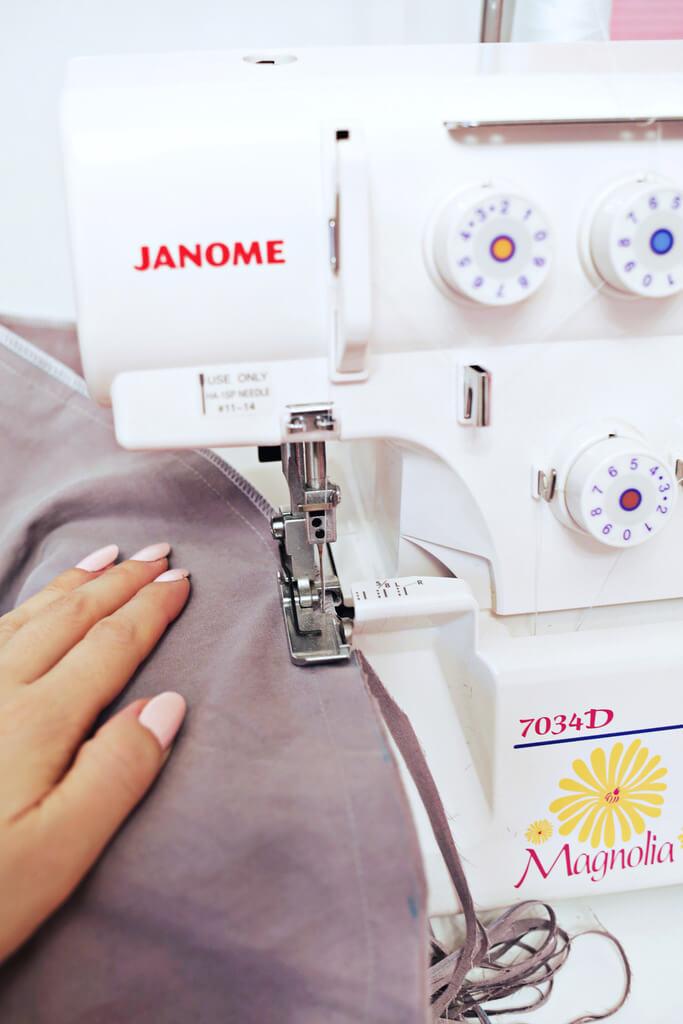 Once the zippers were in, I finished sewing all the way around the pillow with a 1/2″ seam allowance to match what the zipper areas were, and then use my serger machine to serge the edges for extra durability. Make sure to unzip one of your zippers a bit so you can still get into the pillow once you close it up! It’s really hard to unzip a zipper from the wrong side. If you don’t have a serger, just do two rows of straight stitching around the pillow about 1/8″ apart if you want to give the seams some extra strength. 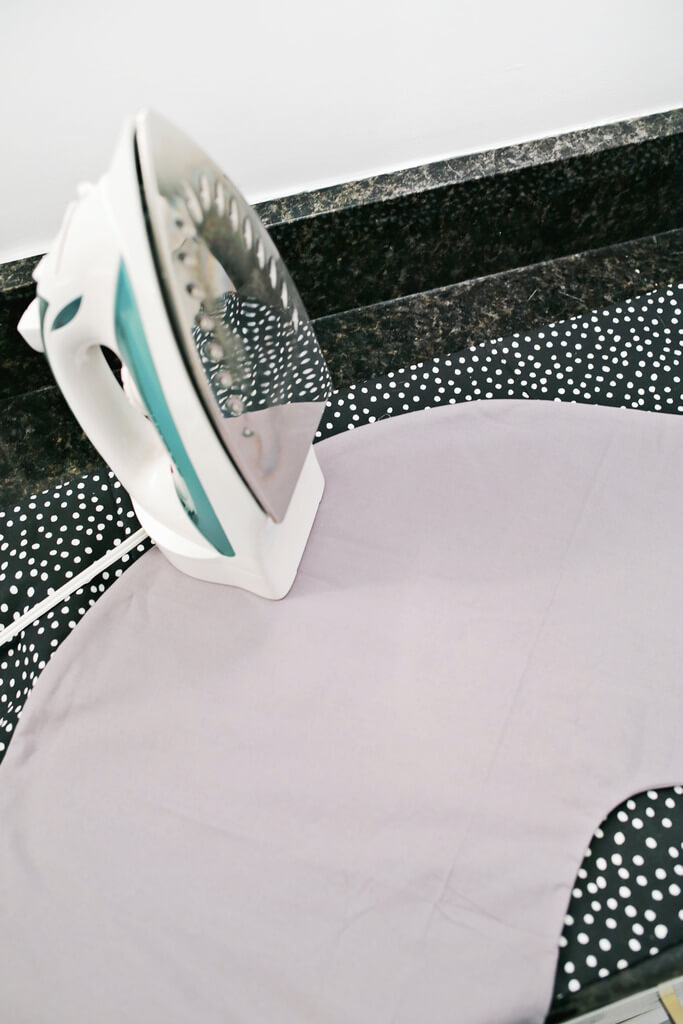 Once the sewing was done, I turned the pillow right side out and pressed the seams flat with an iron. Now my pillow was ready to stuff! 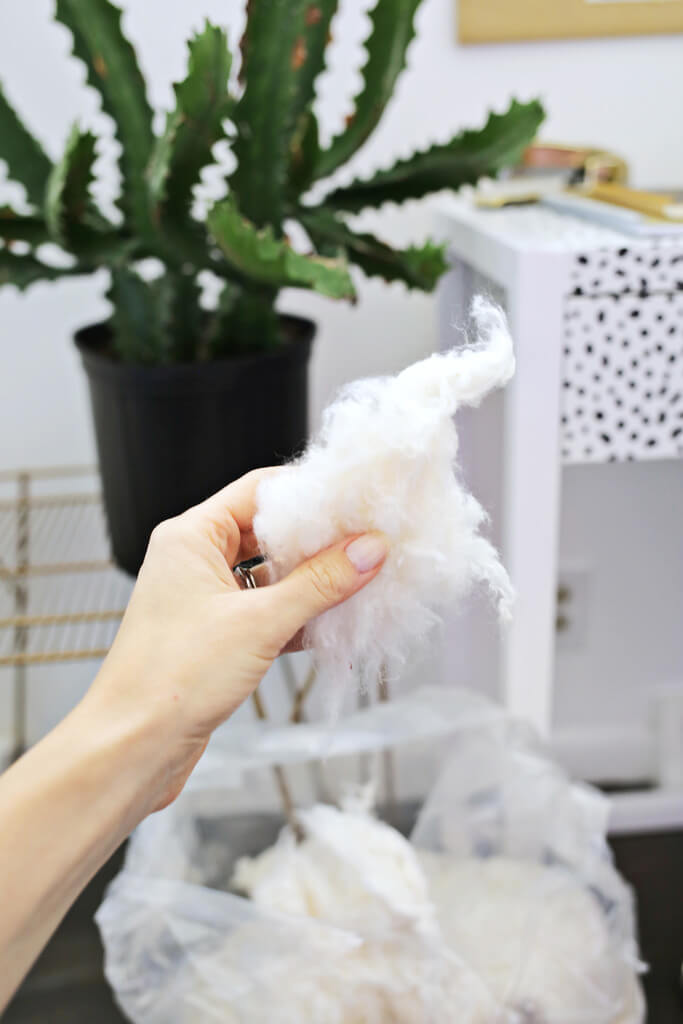 Since choosing the stuffing was a big reason I wanted to make my own, I chose raw organic cotton fiber as the filling. The raw filling does have some hull pieces in it which I was concerned may be a bit pokey, but most are too small to feel and if there ever was a bigger piece, I just picked it out as I stuffed the pillow. The next stage up in filling is cotton batting (it doesn’t have any pieces or hulls in it), but it started to get more expensive, and I hoped it probably wasn’t worth it and I think I made the right decision. I had no idea how much I would need to fill the body pillow, so I ordered 12 pounds and figured I could use any leftovers for future pillows as needed. I would say it probably took about 8 pounds to stuff the pillow to where it is now, but I don’t like a super full shape, so you may want more if you do.

The cotton also tends to settle a bit as it gets fluffed up when you put it in and then tamped down again as you sleep on it a few nights, so don’t worry if it flattens out a bit at first. I’ve added more to the pillow twice, but since I have a top and bottom zipper, it’s really easy to do and I can just add more to one spot as needed. So glad I did the two zippers! 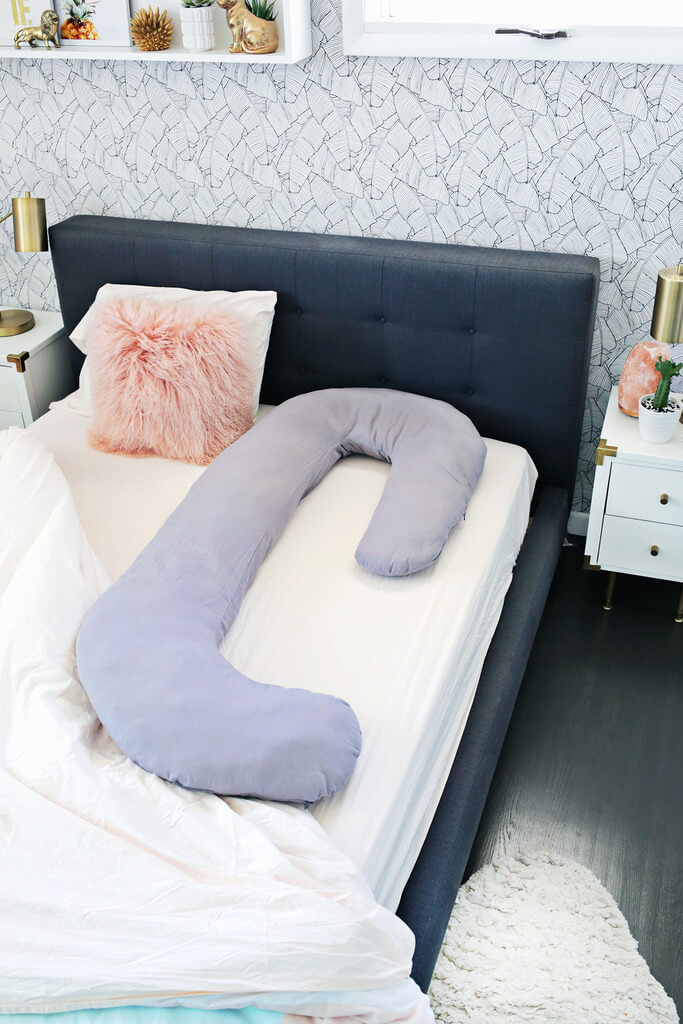 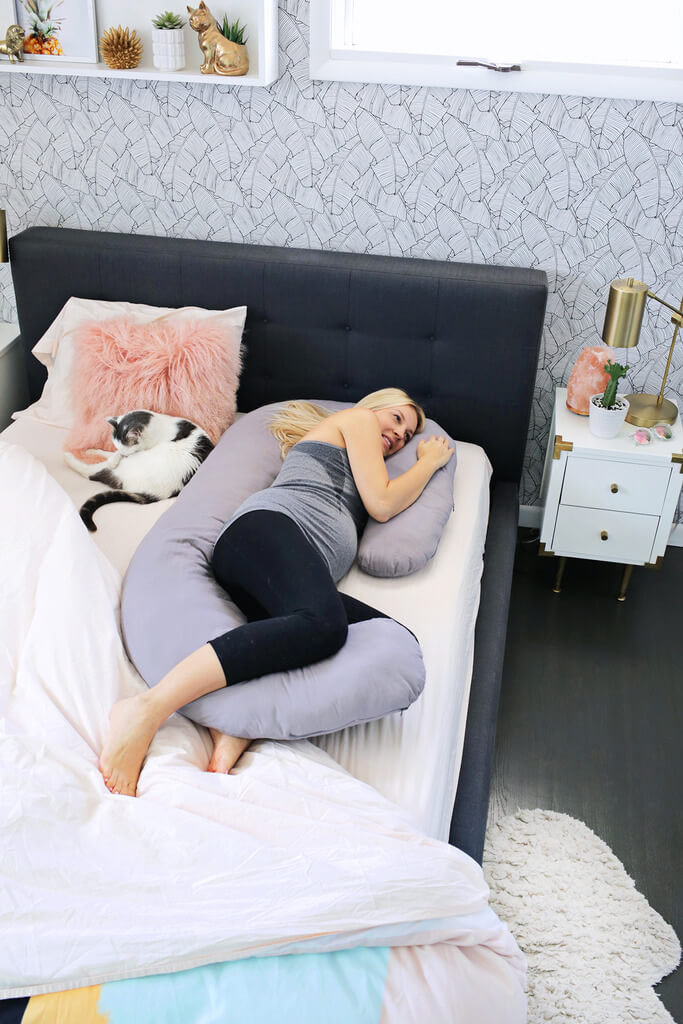 As you can see, I look pretty comfy-cozy in this guy! No gross smells either. In fact, the cotton had kind of a nice natural outdoorsy smell that was kind of pleasant the first couple of weeks, so that was an added bonus. Cotton stuffing is a bit more dense feeling than if you are used to sleeping on a down pillow, so that may take some getting used to if you really need a super soft pillow. I’ve read that using wool is the closest you’ll get to a really soft pillow, but it can also have a, uh, “sheepy” smell to it, so that’s something that might put you off…

If you wanted to make a second cover that can be taken off to be washed (which I think I’ll do soon), use your original template and make a second cover that’s just a tiny bit bigger than your first cover, but make it an envelope-style pillow at the fattest end of your pillow rather than using zippers to make it easier to make and take on and off.

I love having the C-shaped pillow since I turn back and forth between my left and right side all night (although I try to stay on my left most of the night since I know that’s better) and most nights I turn to the opposite side only to find that Todd is using it as his body pillow and I have to kick him off of it—HA! Anyways, if you’ve been struggling to find an all organic (inside and out) body pillow for pregnancy (or want to pin this for future use!), I hope this DIY can help you too! Now go get some sleep!

10 thoughts on “Make Your Own Organic Maternity Pillow!”