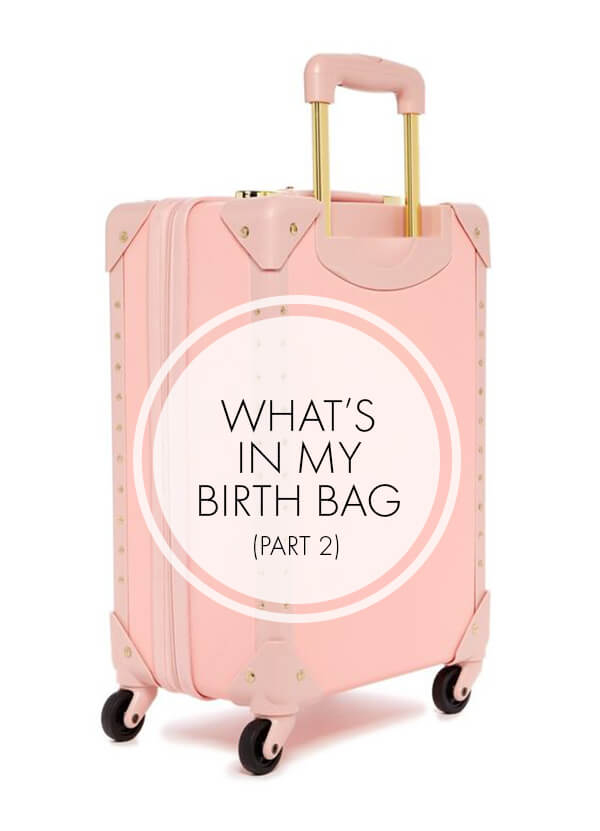 I’ve had a few people request that I do an updated post on what I actually used from my birth bag packing list after Lola was born so here you go! I think unless it’s your second baby you really have no idea what you will want when the time comes so I really wanted to be prepared with a list of options so I could have some choices in the moment. I had to have a bit of a “double scenario” bag since I was giving birth at a birth center with the chance of being transferred to the hospital in case of complications, but thankfully I felt prepared for that since that’s exactly what ended up happening. Here’s what I ended up using the most from the original list:

CLOTHING:
Long t-shirt for laboring
Slip on shoes (flip flops please!)
Change of underwear and socks
Sports bra for birthing tub
Nursing sleep bra and deep V-neck tops that are easy to nurse in
Pajamas (nursing friendly)
Going home outfit (I added a button up cotton dress and leggings and stretchy tank top as options)
Toiletries bag (have lots of giant pads and adult diapers at home for post partum but birth center and hospital provide those types of things along with peri bottle while there)

WHAT I USED: I did spend the first half of labor in my long t-shirt (and I wore that over to the birth center too) but eventually I was just in my nursing sleep bra since it was the most comfortable for the second half of labor. I wore the hospital gown the first night but eventually changed into a deep V-neck for the rest of the stay (so much more comfortable!) when I wasn’t doing skin-to-skin with Lola and I wore the leggings and a tank top for the ride home.

LABOR TOOLS:*
Essential oils (the birth center has a diffusor in each room so I’m taking lavender and orange oils)
Headphones for playlists, relaxing music, etc (birth center also has speakers for playing tracks out loud too )
Rice heating pad (they also have electric heating pads at birth center but you have to stay near the outlet to use that)
Pool noodle (sliced down one side to put over rim of birth tub for softer surface to lean on)
Washable bath pillow for birth tub
Massage Oil
Battery-operated candles for mood (aren’t allowed to have real ones!)

WHAT I USED: I did use some peppermint essential oil on a washcloth to help with the nausea (I threw up a lot) but I didn’t end of wanting the rice heating pad at any point. Since we were there mostly during daylight hours and had a big window in the room I didn’t use the candles but I was glad to have the bath pillow in the birth tub to lean on (I didn’t use the pool noodle since I was leaning over the rounded end of the tub instead of the long straight side).

FOOD + DRINK:*
Snacks for during labor (I have protein bars, almond butter packets, honey sticks, popsicles, and chicken broth as options and then coconut water and electrolyte water to drink)
Meals/snacks for Todd during labor (he needs to keep his strength up too!)
Frozen meal for after labor

*Definitely something that we would use more or less of certain items if we were at birth center (where Mom can eat and drink) vs. hospital (where they are a lot more restrictive on that and would serve meals while we were there). Birth center has fridge and small kitchen area where we can keep and prepare food.

WHAT I USED: I was really glad I had brought different kinds of food so I could pick what I something that I felt I could handle at the moment. I don’t think I ever actually felt hungry so it was more our doula or midwife suggesting I try and eat something when I felt weak. I ended up eating parts of a protein bar, almond butter pack, honey stick, and a popsicle as well. I think the popsicle was the easier item to get down and we didn’t end up needing the frozen meals since we were transferred to the hospital. Saved those for later!

MISC:
Charger for phones and camera
Camera
Change of clothes/toiletries bag for Todd
Swimming suit for Todd (birth center has a walk in shower for hydrotherapy)
Cooler for placenta (doing placenta encapsulation)
Nipple butter
Dermoplast for pain relief and stool softener (hey, no one said this was a glamorous process right? I also have organic sitz spray, but I’ll probably use that more once at home)

WHAT I USED:  I think I used everything on this list except Todd didn’t need his swimsuit since I was only in the tub and he stayed outside the tub while helping me. That nipple butter is great though…

FOR BABY:
3 outfits/hats for Baby
2-3 receiving blankets/swaddlers
Car seat (love that this one is really safe but also really light to carry!)
Nursing pillow
Coconut oil (putting some on her bottom right away will help get the meconium off easier during those first diaper changes)

WHAT I USED: I was really surprised that all the tiny outfits I brought for her were actually giant when I tried to put them on her- even the newborn ones! I’ll take a pack of newborn onesies just in case next time. Also, I bought a bunch of hats for her being convinced I would have a bald baby, but she had so much hair and most of them were so big, so I guess I didn’t need all of those! Love those swaddlers though as well as her car seat. I ended up taking that pillow but after a month or so of nursing I like this one a lot better (just wish it was organic though).

Being in the hospital meant that they did provide some after care things that the birth center wouldn’t have (like meals and some postpartum care items like numbing sprays) so I had some purchases that I didn’t end up needing for that reason. I think if we ever get to Baby #2 (which sounds literally insane to me at this moment) I’ll definitely look back at this list as my starting point for packing again. If you’re in this stage of life (or will be soon) I hope it’s helpful for you as well!

P.S. If you missed Lola’s birth story, you can read all about it here!

4 thoughts on “What I Actually Used in My Birth Bag”