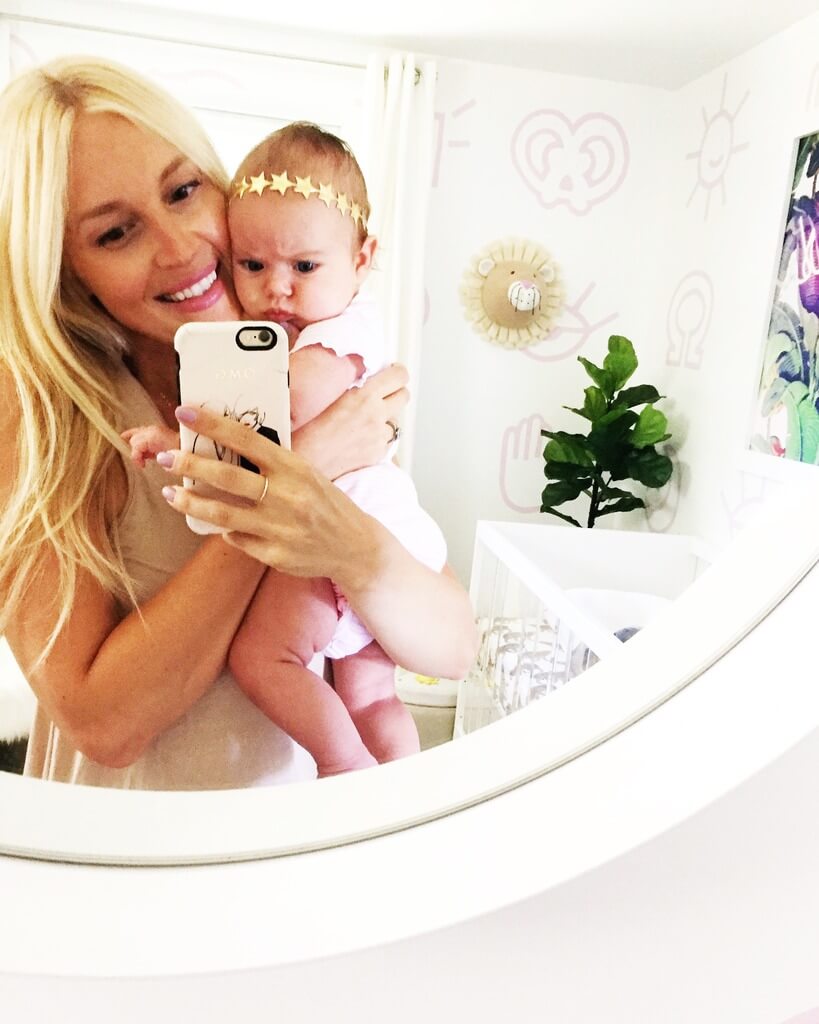 Lately I keep thinking about that Beatles song, “I’ve got to admit it’s getting better, it’s getting better all the time…” While life with a new baby is still never easy, it feels pretty night-and-day different compared to the first few months. I would say that things started to really turn a corner at the two month mark when we started to get more of a daily schedule in place based on when she naturally would wake, want to eat, and get sleepy for naps. Once I actually took note of all those cues I could see a loose pattern emerging so I made a schedule off of that and she took to it pretty quickly. I found it so helpful for me because once I realized when she was getting sleepy around the same time each day I could remember that the corresponding fussiness was due to her being tired rather than hungry and put her down for a nap instead of feeding her to try and solve the problem. It definitely explained why she would just fall asleep those times when I fed her guessing she was hungry instead. 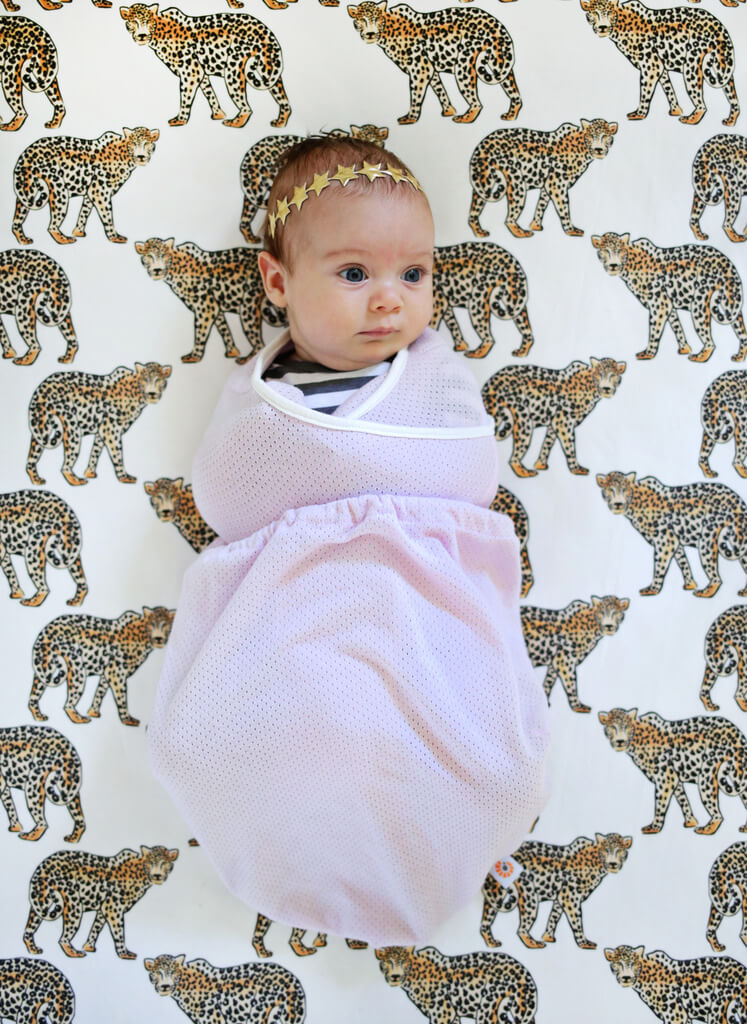 Another thing that also helped was swaddling her for naps during the day. I was just swaddling at night before that but once we swaddled during those nap times she went from only doing 45 min naps to 1.5-2 hour naps instead-YES! We have a few swaddlers but since she’s a summer baby it’s nice to have some lightweight ones as well like this breathable swaddler that Ergobaby sent us. Lola is basically baby Houdini because she can wiggle her arms out of all of them if she really wants to, but these swaddlers have the arm pockets which help slow her down a bit on that front and they have a lilac one that matches her nursery perfectly which I love too. 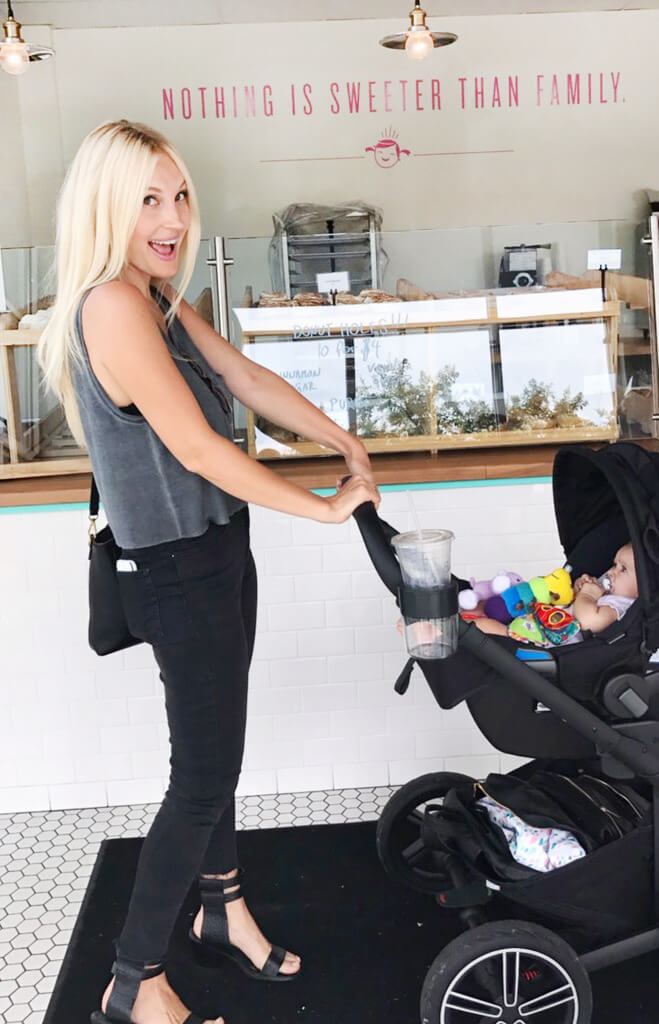 Trying to get out for little adventures more and more. The Five Daughters donuts in town sells vegan donuts that are SO good! 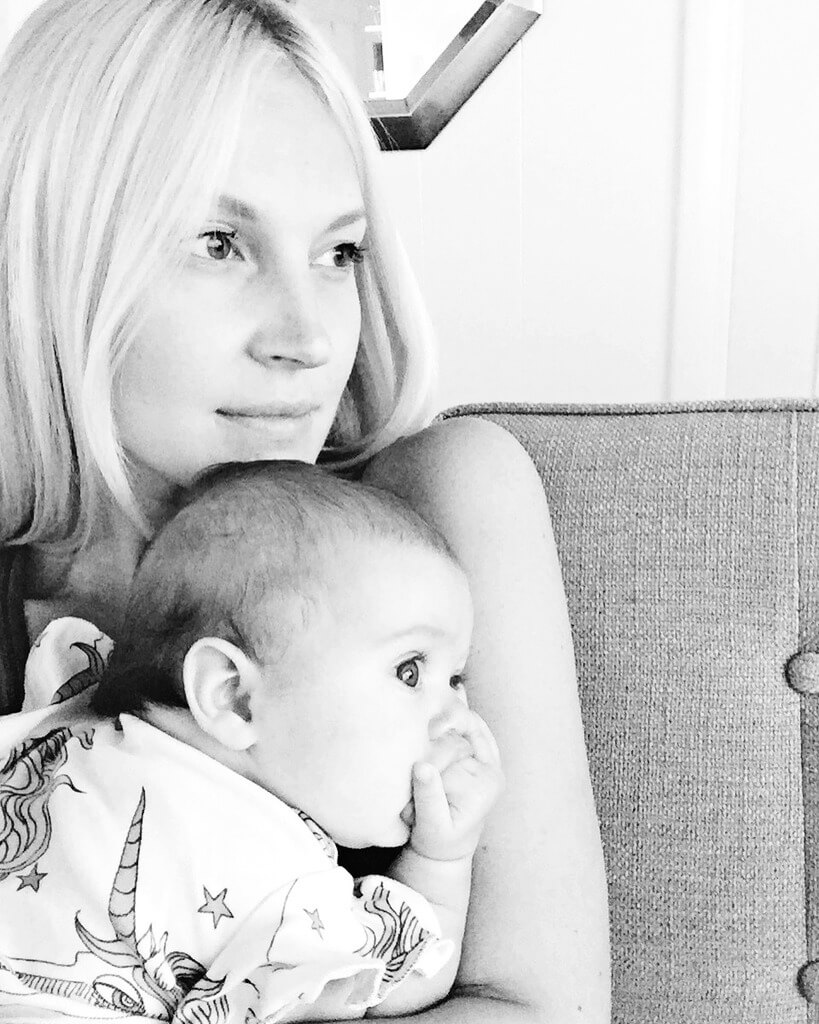 Lola’s also started sucking on her fingers and hands a lot and drooling more so I’m wondering if she’s started teething?! 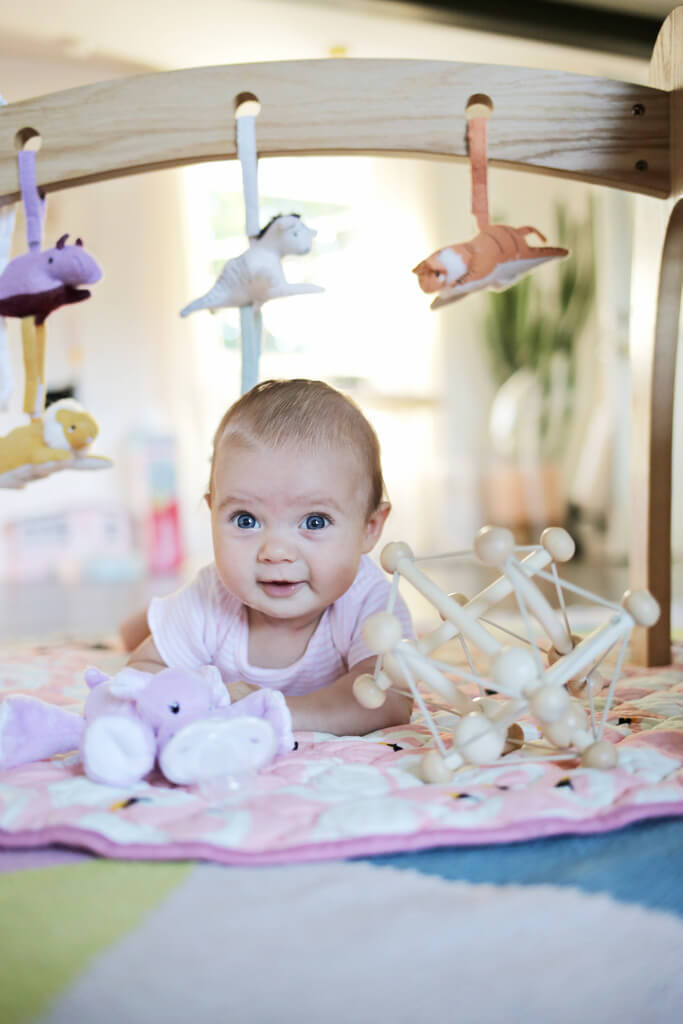 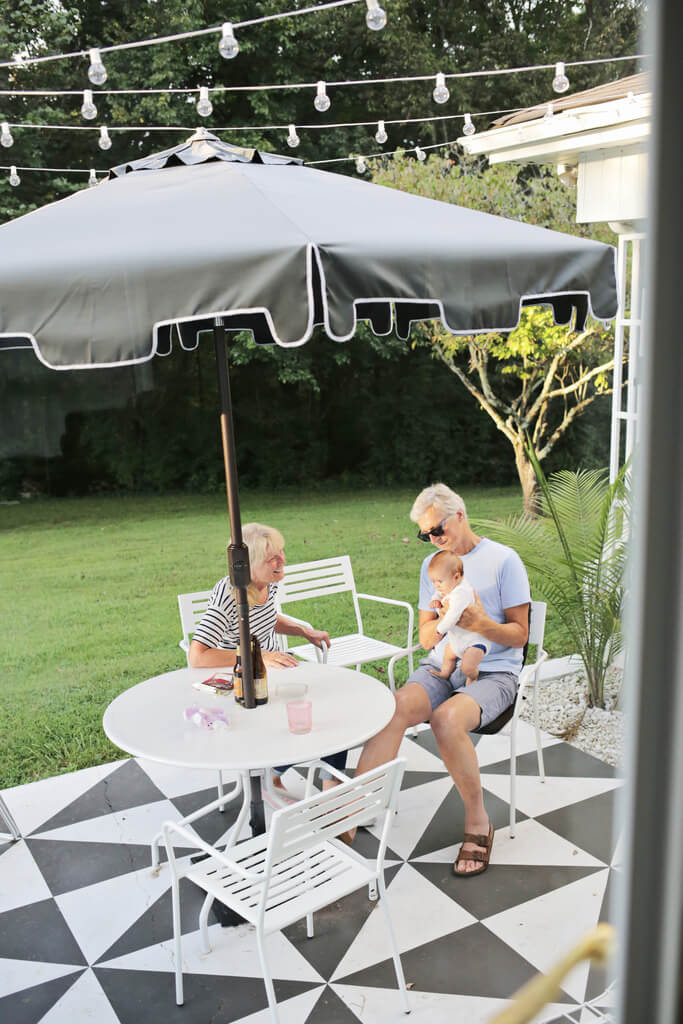 I don’t usually get to see my parents all that much since they live 9 hours away in Pittsburgh, PA, but with Lola being born I’ve seen them a bunch of times this year and it’s been so nice. They came through town this month on their way to and from visiting my aunt in AL and it warms my heart in such a huge way to see them spend time with Lola. I have to alert my Mom know every time I wake Lola up from a nap when they are here because she loves to watch her smile and stretch once she is released from her swaddle- it’s so cute! 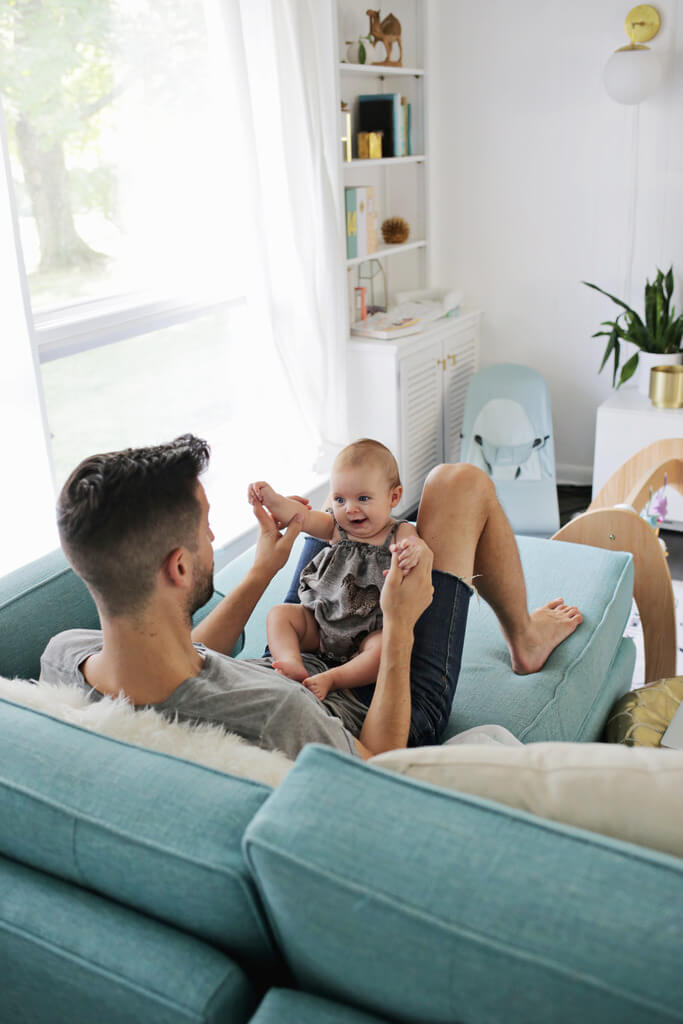 Man, does this girl love her Daddy! Also, what is it with guys and pretending babies are exercising? I thought it was just a Todd thing to have her do leg squats and reps of things like she’s at the gym but my Dad does the same thing when he holds her so maybe it’s a general guy thing. Todd also loves to prop her up with pillows on the couch so it looks like she’s a real human sitting by herself and I’ve been told other Dads do that a lot too… 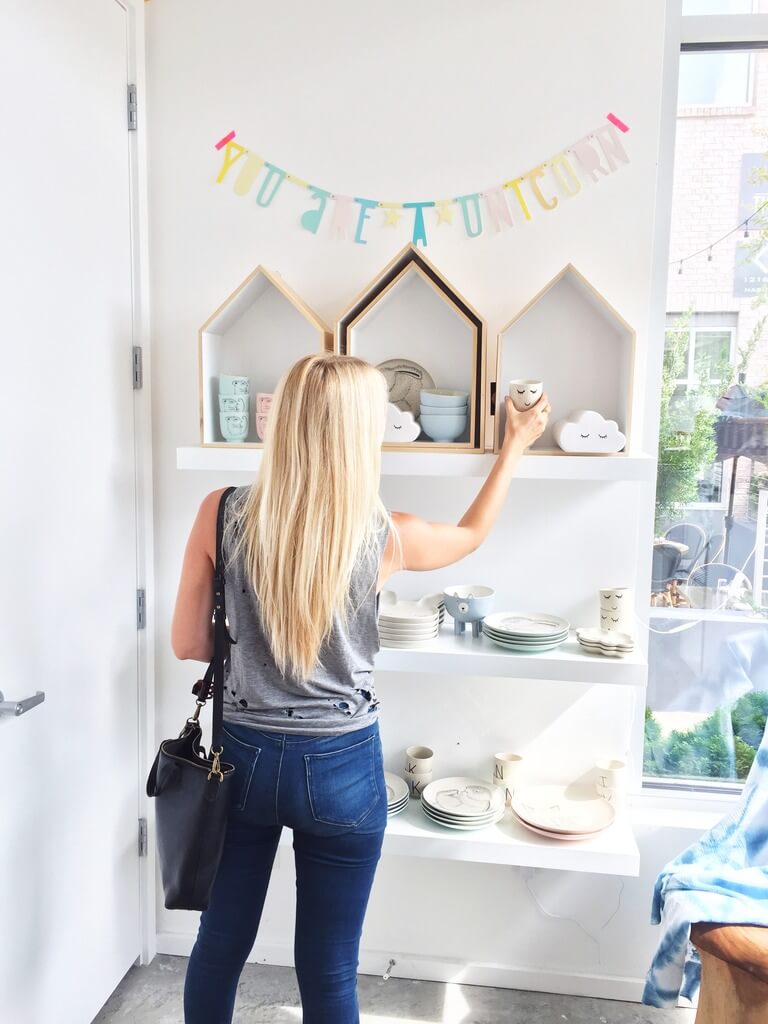 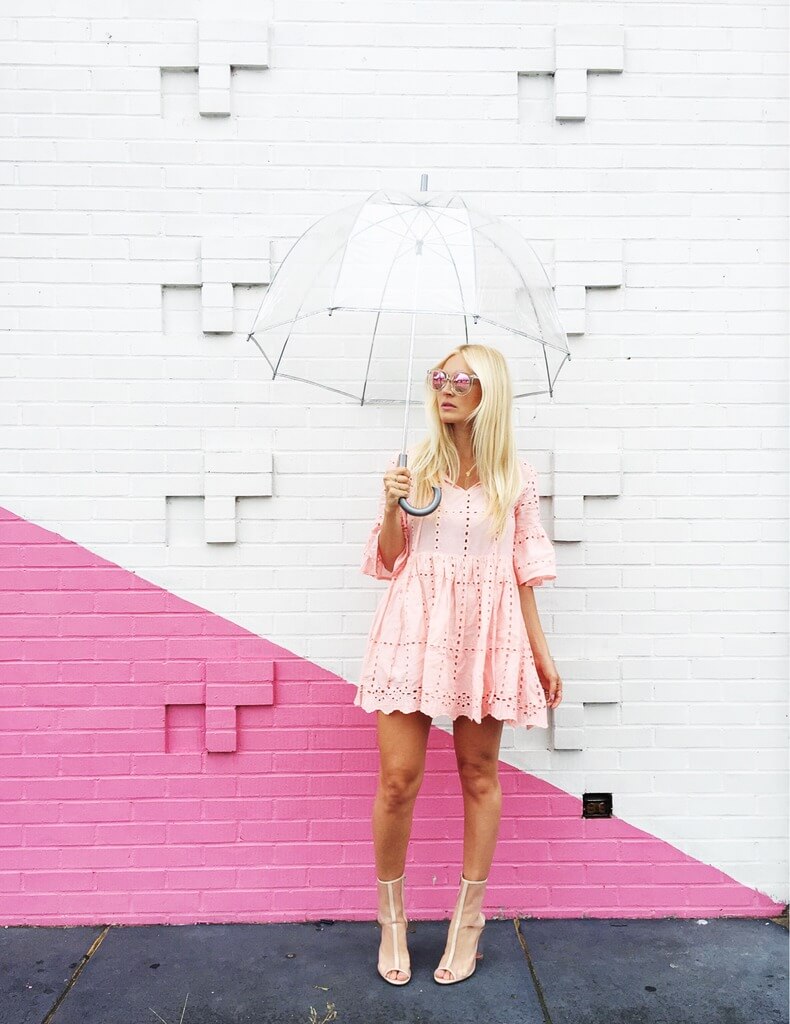 Still trying to get out of the house dressed up now and then for coffee or lunch to refresh the old spirit. The overall outings still can’t last too long (I tried to run several errands the other day and I think I overloaded her) but even just a few hours out make me feel a little more normal. 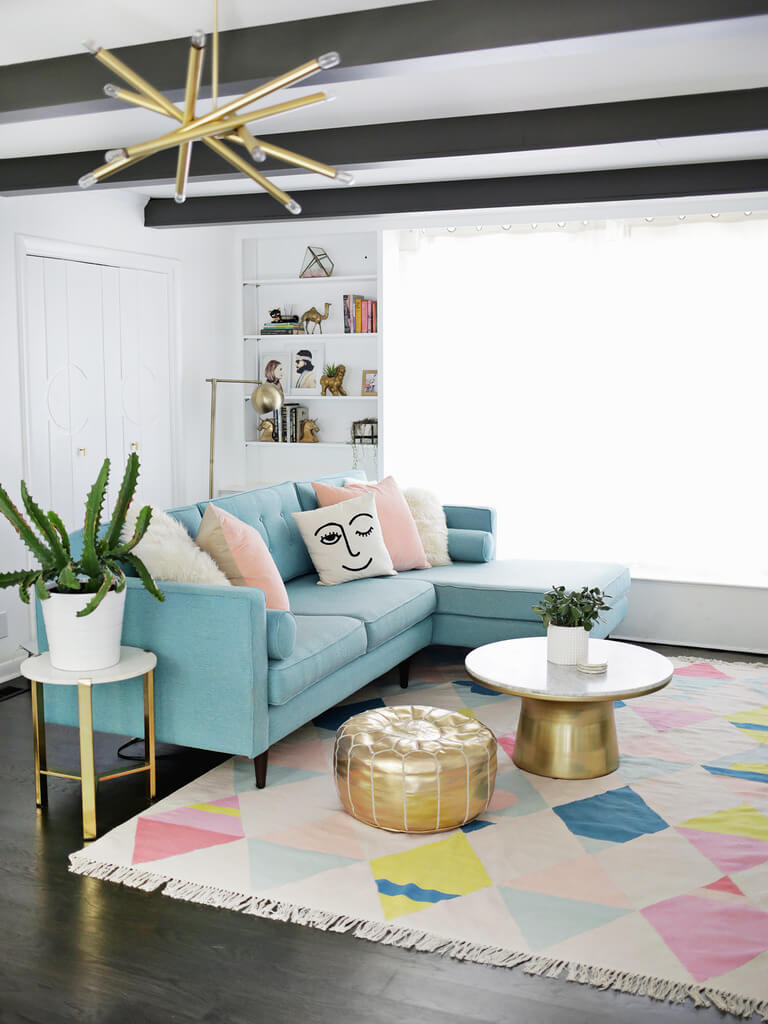 LOVE this new rug from Arro Home in our den. It’s bright, fun, and great for Lola to play on since it’s a flat weave and she won’t get shag rug fuzzies stuck all over her sticky drool hands. I’m sure I’ll be moving this one all around the house since it basically matches every room too! 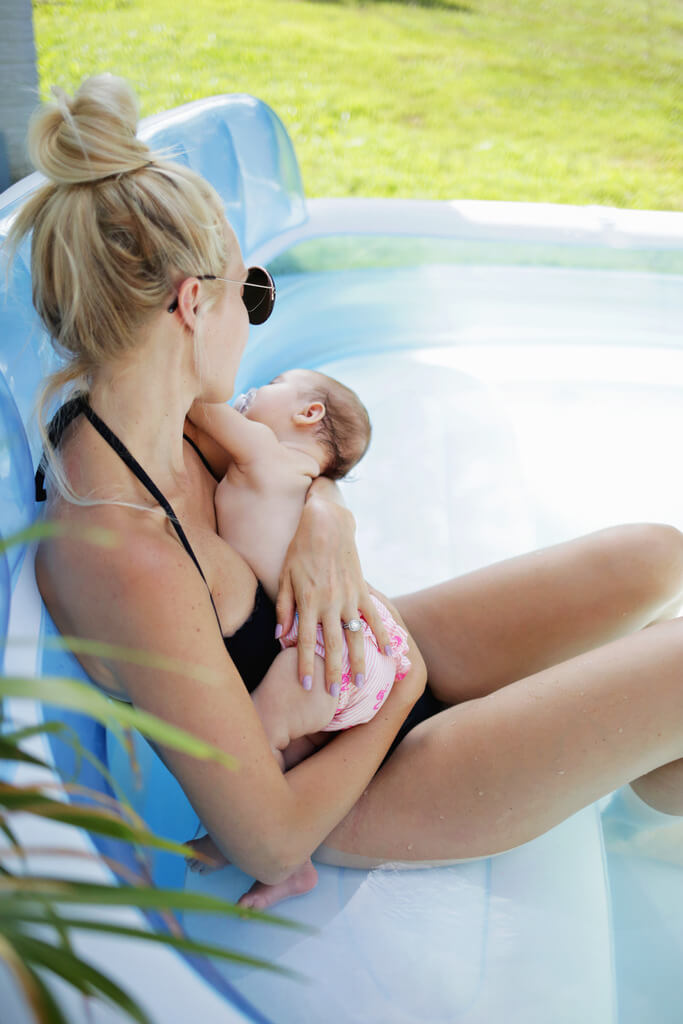 Lots of pool days lately! This inflatable pool is probably the best thing we bought this summer-it’s amazing for the price and we’ve had at least 4 adults and Lola in it at one time. She loves splashing in the water and I like how surprised she gets when she splashes herself in the face! As you can see though, sometimes a girl just has to nap no matter where you are… 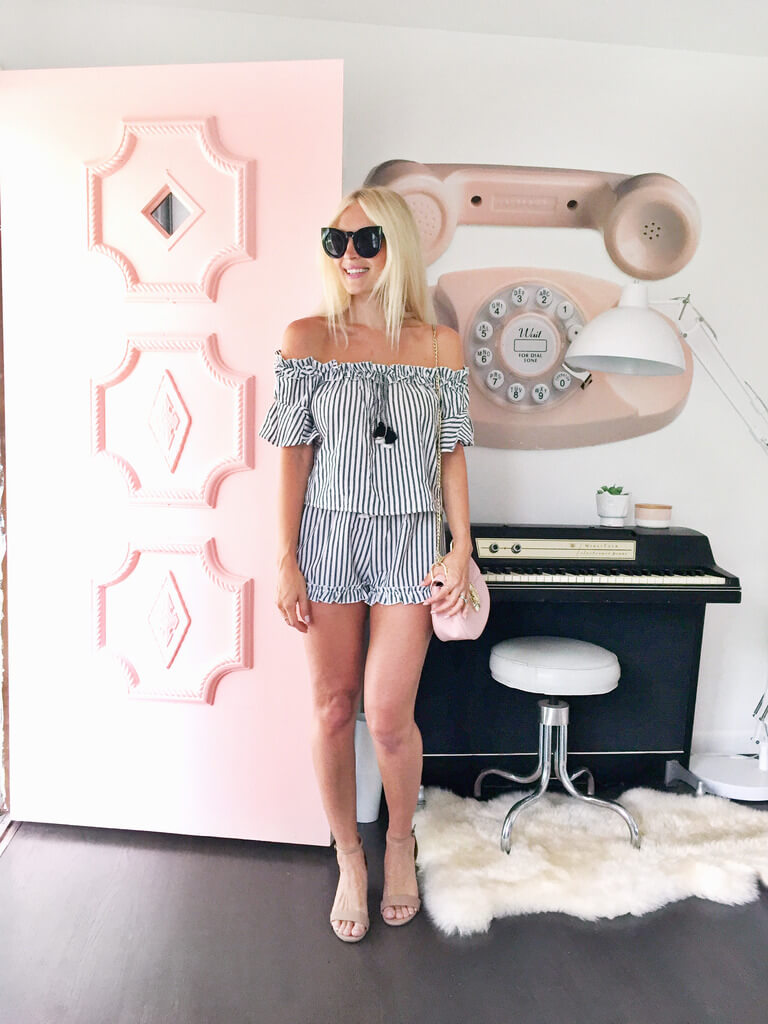 Todd’s been wanting to mini-golf all summer (usually one of our main summer activities) so we had a date night where we we got Thai food and then played a round together and it was really fun. I will say though that even though it’s nice to get out just the two of us, it is hard to totally enjoy it since my brain feels like it’s only partially there and the other half is thinking or worrying about Lola at home. I’m sure that totally normal but I do want to feel a little more present in the date nights so hopefully I can let that anxiety go a bit more as time goes on…

While having a schedule has made life a lot more manageable, Lola has been going through some sleep regression the past few weeks so it’s been a little more tiring than usual. She may very well go back to a better sleep schedule soon or this may just be her new normal for a bit or forever- we’ll see! Until then, I may be going out for coffee a bit more than usual 😉

11 thoughts on “It’s Getting Better All The Time”