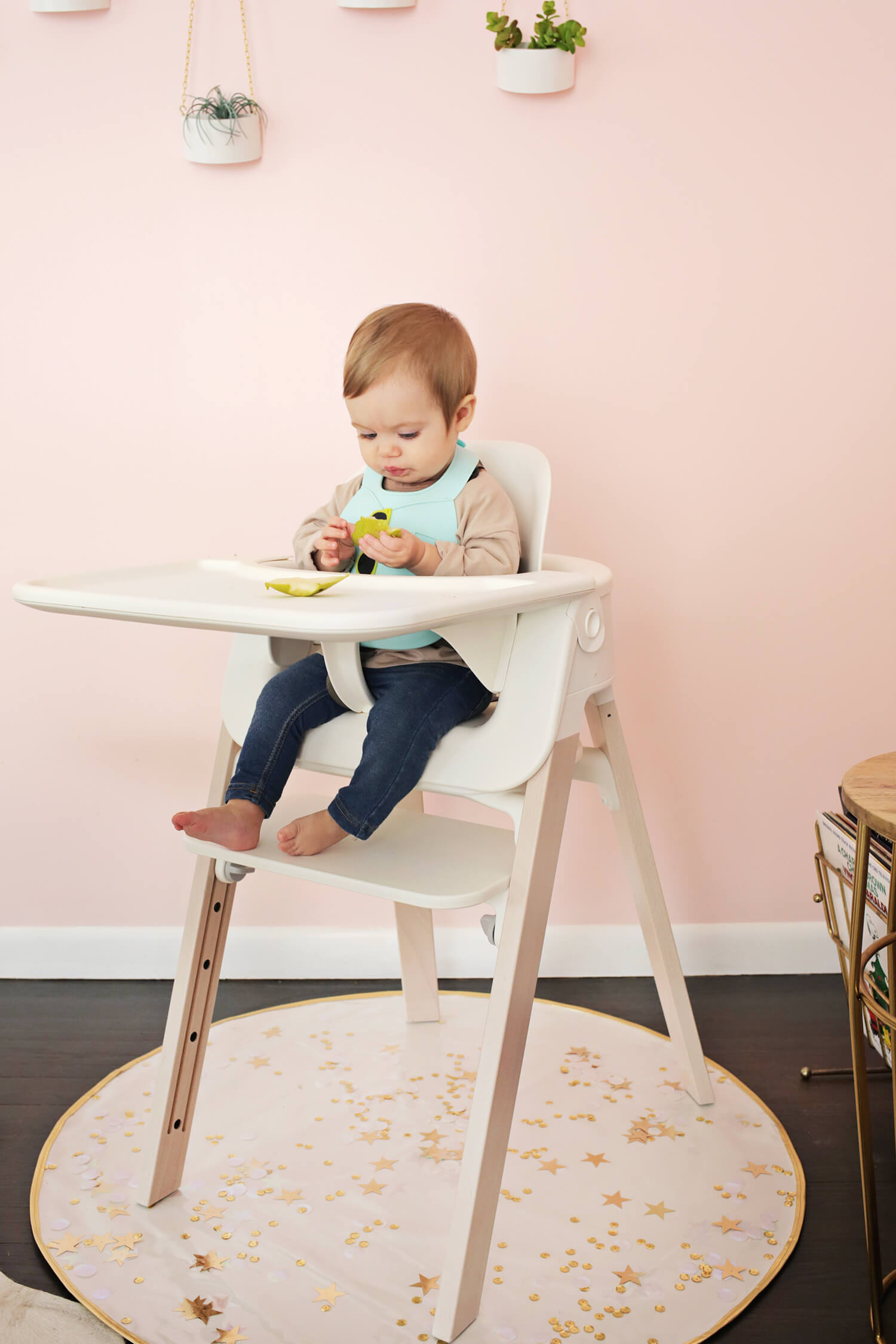 There are so many things to think about with having a new baby that I just didn’t have space in my brain to decide on anything that would come later down the line—the old “one thing at a time” mentality for sure. That being said, I didn’t really think that much about starting her on solid food and our timeline or plan for that until she was several months old and I knew it was just around the corner at the six-month mark. In the meantime, I had heard little whispers of friends that had already done or were starting something called “baby-led weaning” with their kids and seemed to really love it so I looked into it for a few months before deciding to give it a try when Lola was showing all the signs of being ready for food (usually happens around 6 months but they should be able to sit up well on their own first in addition to a few other indicators as well). The name “baby-led weaning” is a bit misleading since it sounds like you are weaning off breast milk (which I didn’t want to do for quite some time) but it’s basically just about starting solid food. The basic premise of the whole thing is that instead of starting Baby on purees for a while, you jump right into actual food that that is soft enough (and usually shaped in long sticks or have a bit of a stem handle on them) for Baby to practice chewing on right from the beginning. That way, they learn to chew right away with types of food that are manageable for them and they can feed themselves from the beginning (always under supervision of course!). They encourage a wide range of appropriate foods for each developmental stage and differing levels of softness as Baby progresses in their eating journey. So, you wouldn’t give a 6 month old a hard crunchy carrot to eat (too hard especially with little or no teeth to chew and a large piece may break off and be a choking hazard) but if you steam or roast manageable slices of carrot soft enough, they can eat them very well! They are actually Lola’s favorite. Small things like soft peas are introduced later since Babies don’t have the dexterity to pick them up one by one at 6 months, so you are kind of making everything into sticks that they can hold (like an oatmeal finger) or steaming broccoli and cauliflower florets and leaving some stem on so they have a bit of a handle to hold while eating. 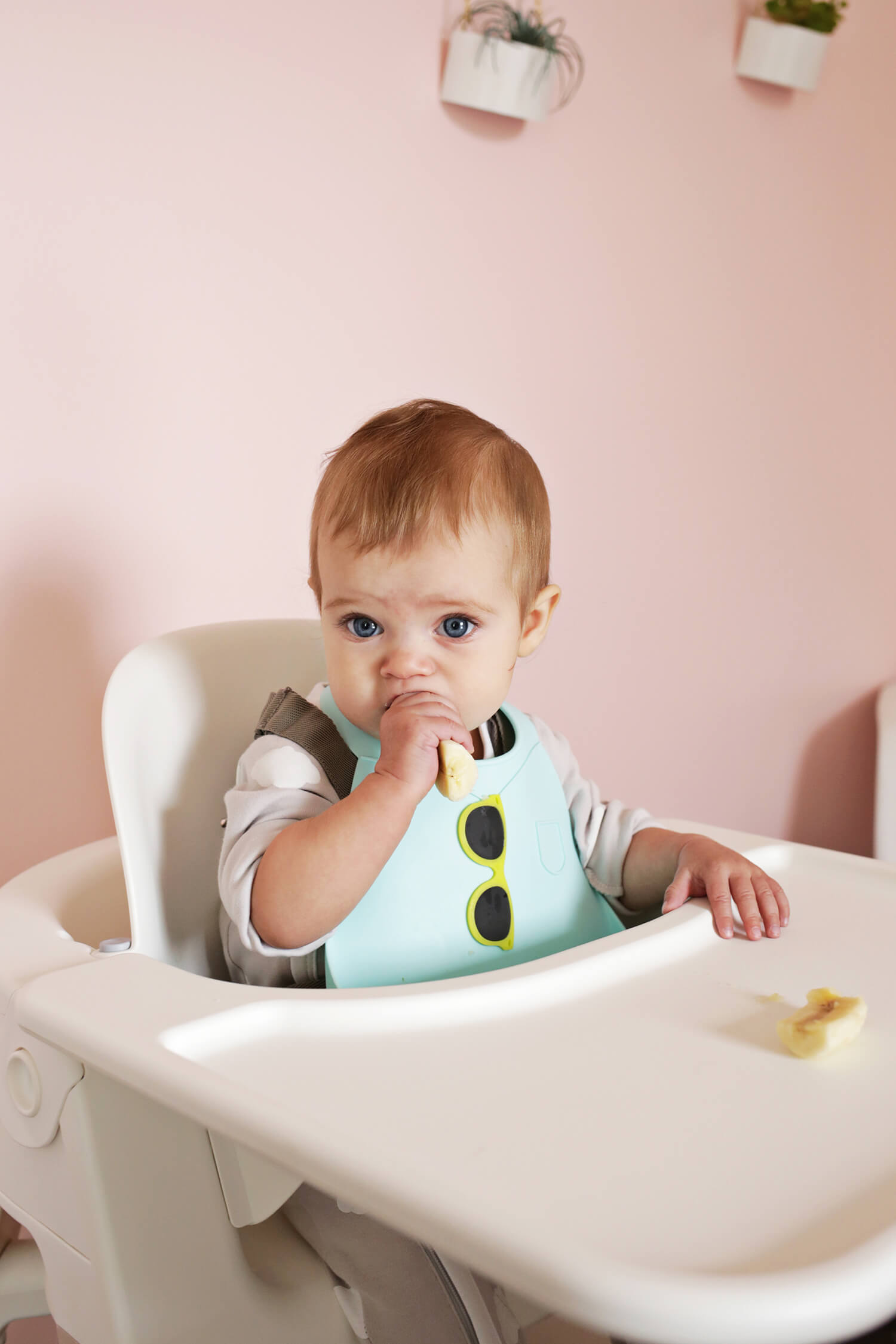 One of Lola’s first foods at 6 months—banana sliced in half was one of her favorites from the start! 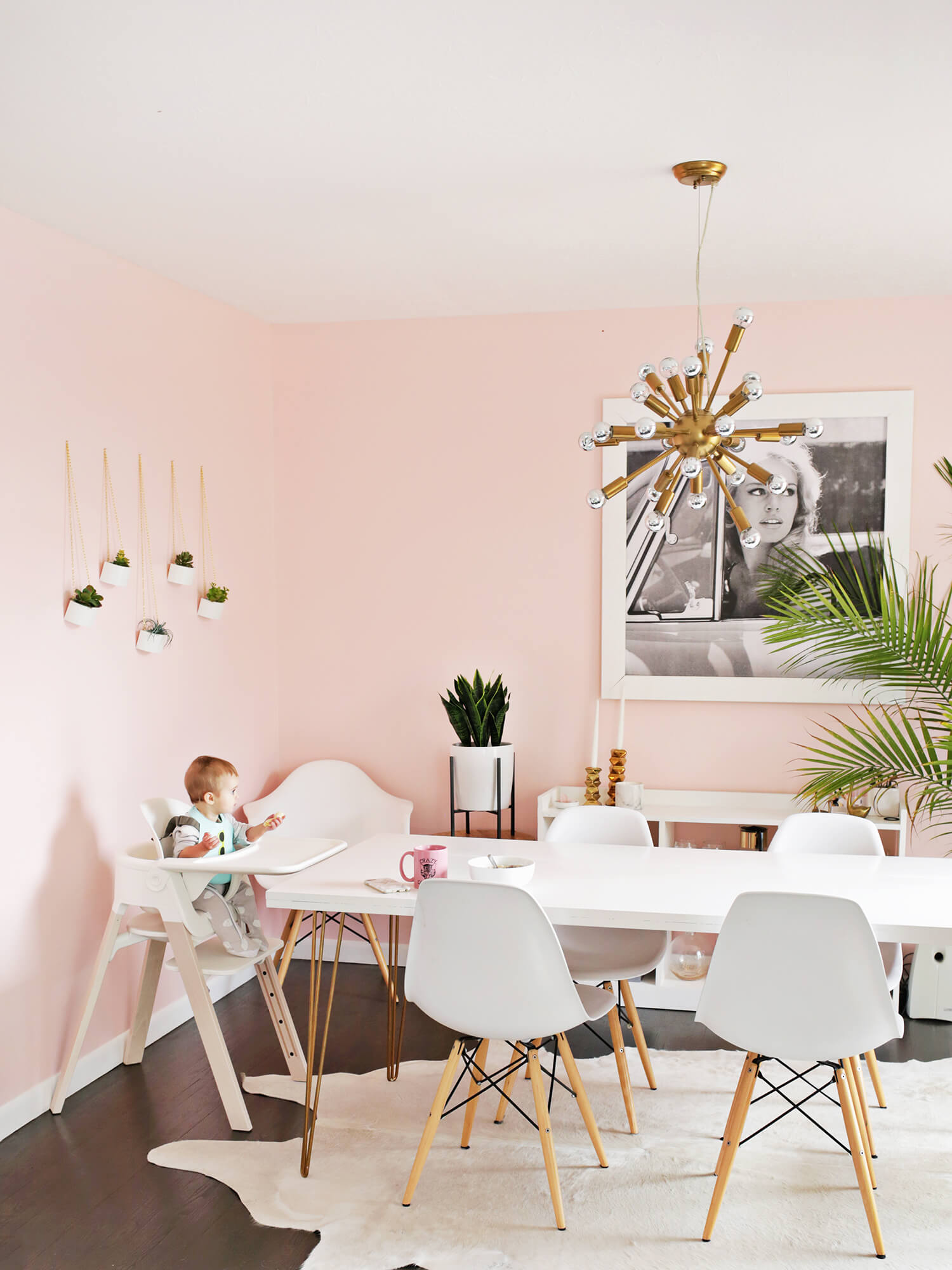 Ok, now the biggest concern (it was my biggest too)…Is there a risk of choking? Yes! Anytime you are giving your baby food that’s not a total puree, there’s a risk of choking. But even if you start your baby on purees, you’ll still eventually have to give them solid food at some point unless you want them to be 35 years old and still only eating applesauce for every meal. Point being that you don’t really get to skip that terrifying stage where it freaks you out that they could potentially choke on something they are eating, you just delay the inevitable by starting on purees. Babies have a gag reflex that is way further up in their mouth when they are born so it’s somewhere near the middle of their tongue and it moves further back as they get older. Lola would gag all the time when we tried to do tongue exercises with her after her tongue tie revision, and that’s why! It’s way further forward than it will be when she’s an adult. So, that reflex being so much further up acts as a protectant for babies to (usually) trigger a gag for a larger piece of food before it become choking and being fully lodged in their throat. That being said, it’s still scary to watch a baby learn to eat real food, no matter what age they are. When it would freak me out to see her gag on something, I would totally have that thought of, “maybe we should just do purees instead,” but I realized that it will be just the same exact thing of her learning to figure it out later so I wasn’t really gaining anything by putting it off. Just delaying that uncomfortable feeling for myself. Also, regardless of what feeding strategy you choose, I really think every parent should take a choking/CPR class so you know what to do in case a baby is choking on food or any other item. As much as you can try your best to keep small things away from babies that could be dangerous, they are smart and fast so it’s best to be prepared in case the worst case scenario happens. I did find that she was gagging more than than I thought she should be so I just steamed her veggies even softer and then she did so much better after that.

And again, I don’t think there’s anything wrong with doing the purees first, it’s just a different process and I think both have their pros and cons. I know some Mamas that did a combo of purees and solids because they would hate it when they gagged and I totally get that strategy too. They do suggest giving Baby water with each meal, but our pediatrician doesn’t recommend water as a drink until after one so I don’t do that part and she seems fine without it.

I do love that right from the start she was eating lots of different foods and I look for opportunities to put spices in things as well to get her used to that—so far there’s nothing she won’t eat. There are some things that you’ll need to keep in mind like not giving them foods with added salt, really limiting processed foods, being wary of or delaying introduction of allergy prone foods before a certain age (like nuts or strawberries), and not giving them certain foods at all (like honey), so make sure to read up on all of that before starting. 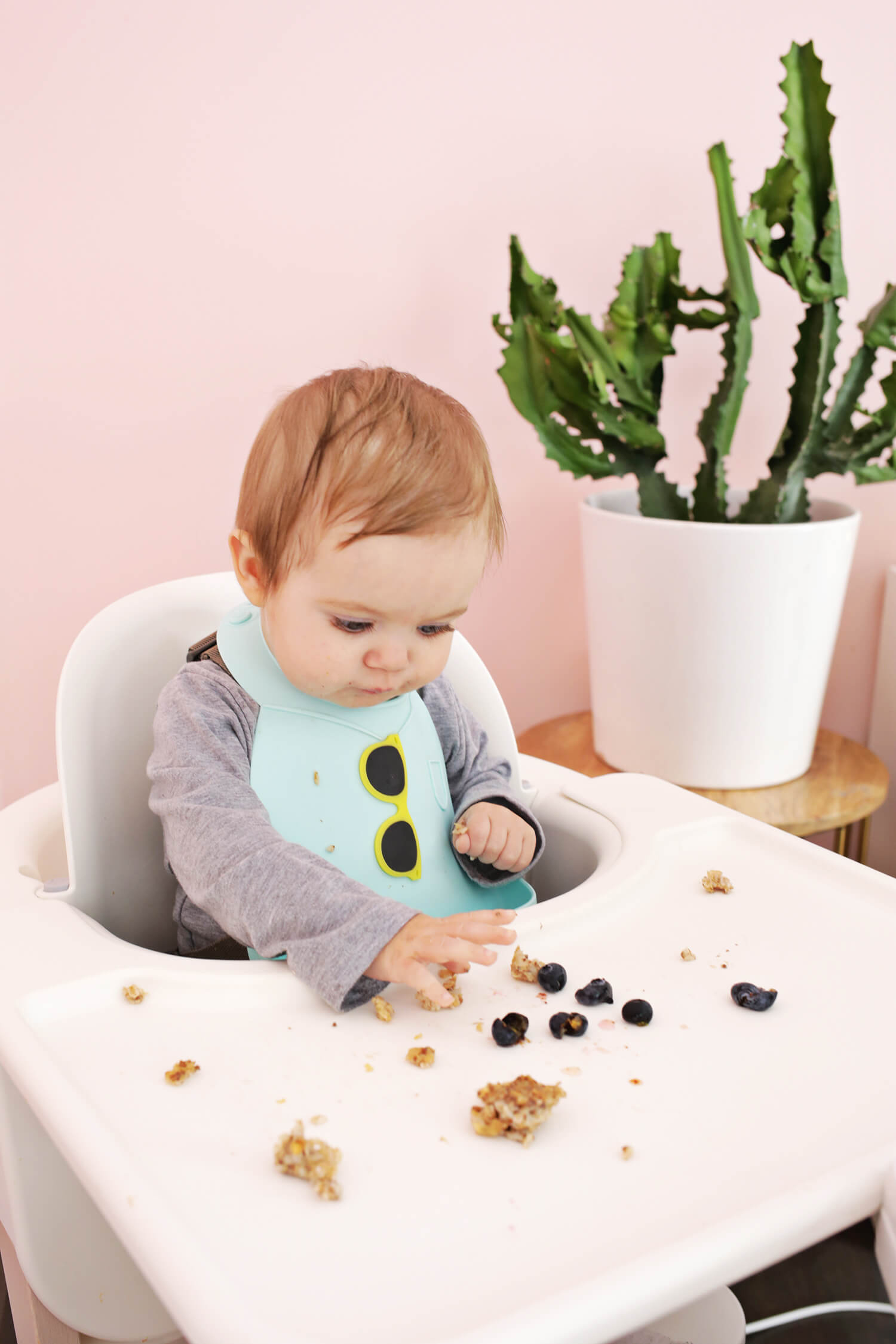 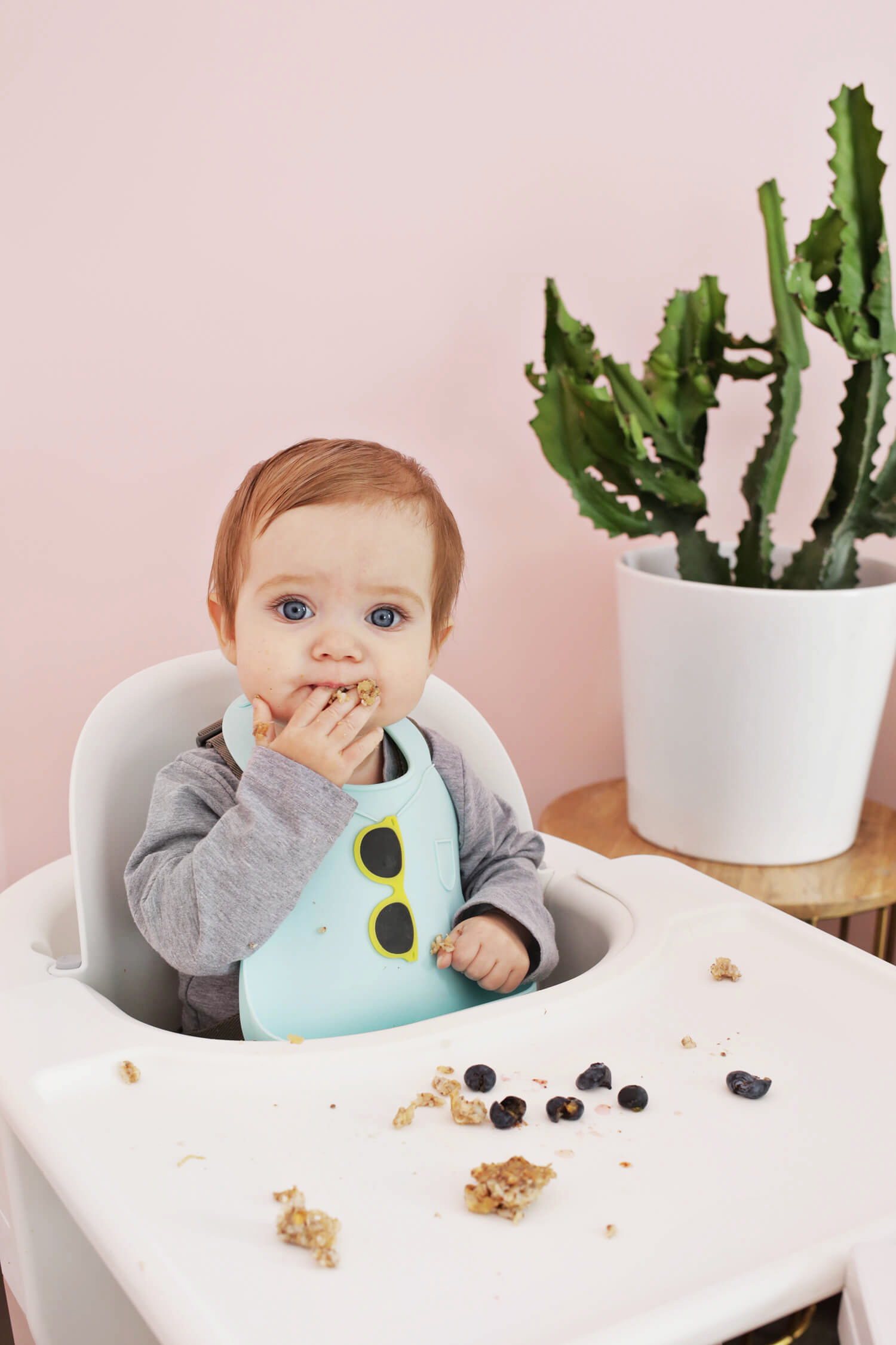 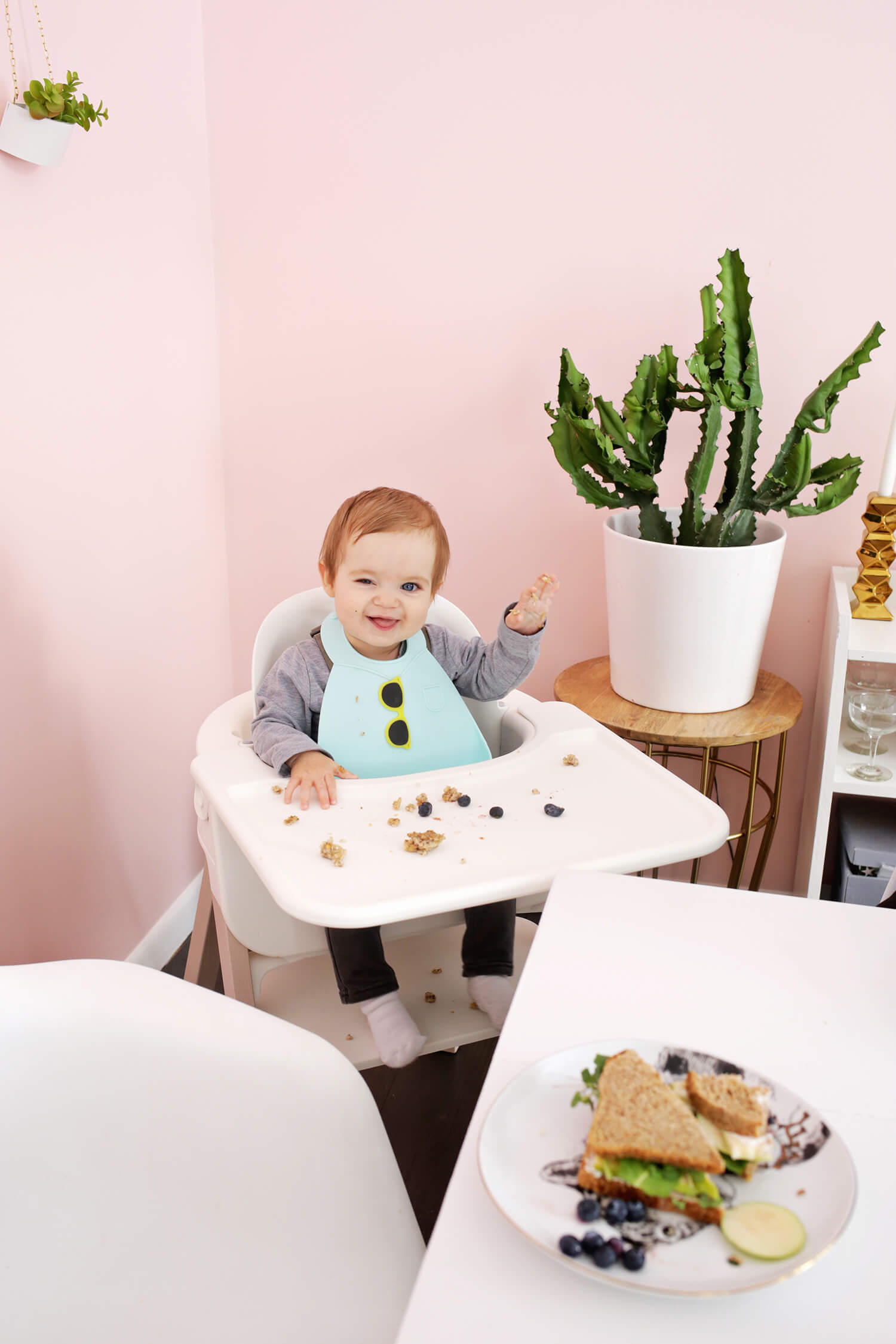 We use this bib (it has a pocket which is great!) overtop of this waterproof smock (they really help keep her clothes clean) and this high chair (for some reason they sell the seat and tray separately). I love that once we don’t need a tray anymore we can cozy this chair right up to the dining table and she can sit right at the table with us. For now we just place her chair right next to the table between Todd and I so she still feels very included in family dinner and the high chair is really easy to clean since it doesn’t have crevices where the food could get stuck so so that’s a big plus. I use this travel high chair that clamps onto a table for when we go out to restaurants or eat at friend’s houses and this placemat is great so she has a clean surface that I can put the food onto. In the beginning it’s helpful to have a crinkle cutter for veggies so little fingers can hold onto slippery shapes easier. On occasion I have spoon fed her some bites of soup or other things she couldn’t really pick up or eat herself yet and I have used these spoons that she’ll learn to use herself later. The Baby-Led Weaning book feels that you should give Baby water to drink with meals as soon as you start solids, but our pediatrician feels water under one isn’t necessary so we haven’t done that part yet.

This is a really messy process so I would definitely recommend a splash mat underneath your chair or just make sure the surface under your chair is easily cleanable (like wood floors). I made a confetti-filled mat as a DIY that I love! Also, if you have a clean space under the chair, you can just hand them back the piece of broccoli that they sent airborne on purpose and they can continue to eat it and not waste food.

I keep hearing from people that have done this that it made their babies such good eaters to be able to feed themselves and have a wide variety of flavors and spices so early. My favorite part so far though is that she can eat and feed herself while we eat so we can all eat at once! No taking turns between Todd and I to spoon-feed while our own food gets cold and we can actually eat our food when we go out pretty normally since she’s busy eating too. So much easier!! We just increased from one meal a day to two meals in the last month (lunch and dinner), and we’ll probably go to three meals in a month or two. Around 7 months her staple foods were banana, avocado, broccoli, cauliflower, potato, sweet potato, squash, carrots, pear, and oatmeal, but now she eats pretty much whatever we are eating with a few variations at times when things are too spicy for her, etc. 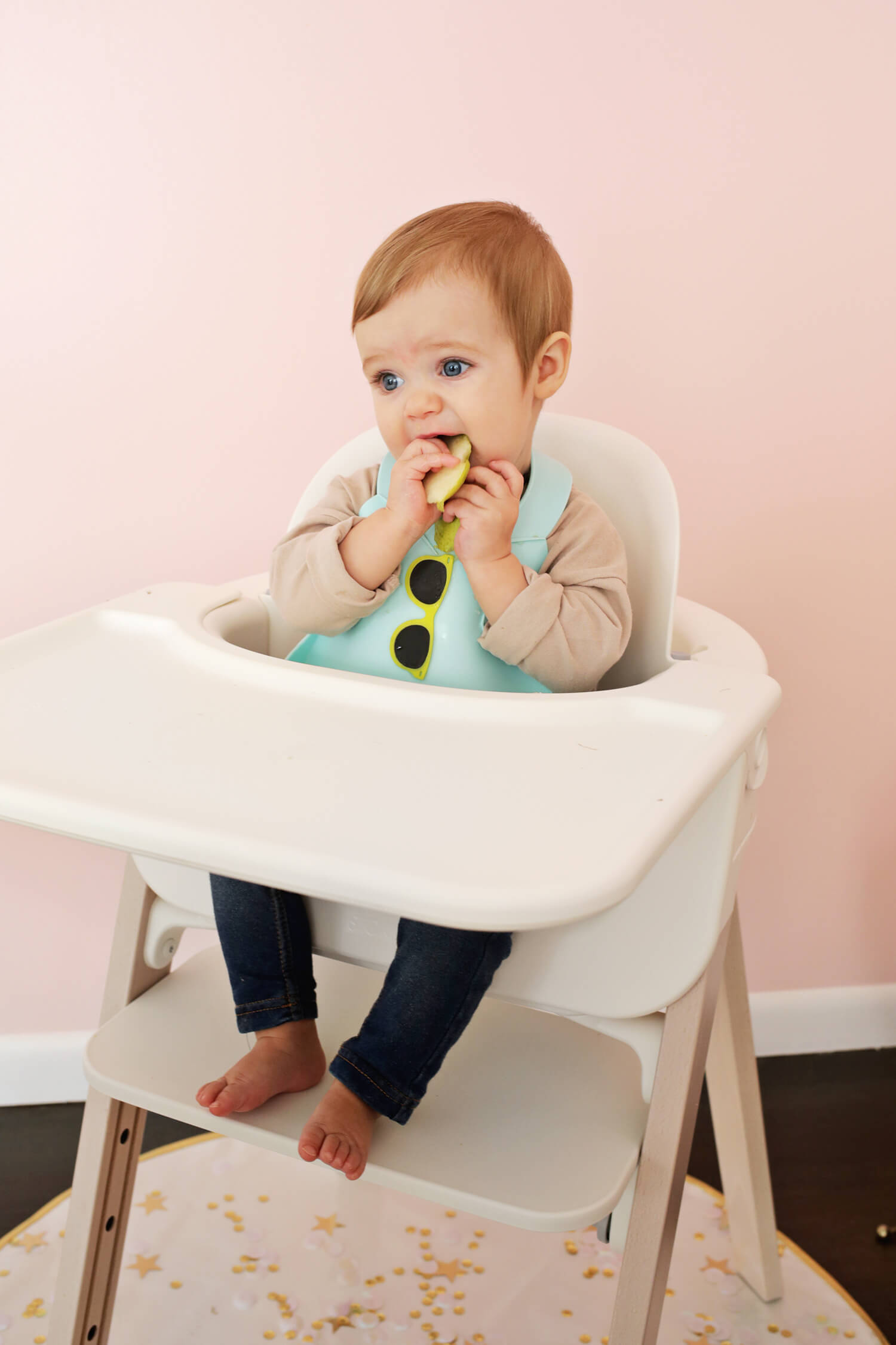 She pretty much always has a fruit desert at each meal—her favorite! They have a cookbook that explains pretty much all you need to know before starting the plan with a bunch of recipes as well, but I would suggest just reading the main Baby-Led Weaning book if you are planning on making your own plant-based or vegan meals like we do. I got the cookbook first since I heard it explains most of the program, but I didn’t feel like the recipes were helpful since I couldn’t use or would have to really alter a lot of them to fit our mainly plant-based eating. It can be helpful to look at the general titles of recipes though just to get an idea of what types of foods are easier for Baby to eat at different stages. I’ll share some of my favorite things and meal ideas to make for Lola in another post in case that’s helpful for you, some I’ve gotten from other Moms and some I’ve had to just figure out on my own! I guess that’s most of Motherhood in a nutshell, huh?

14 thoughts on “How We Started Baby-Led Weaning”