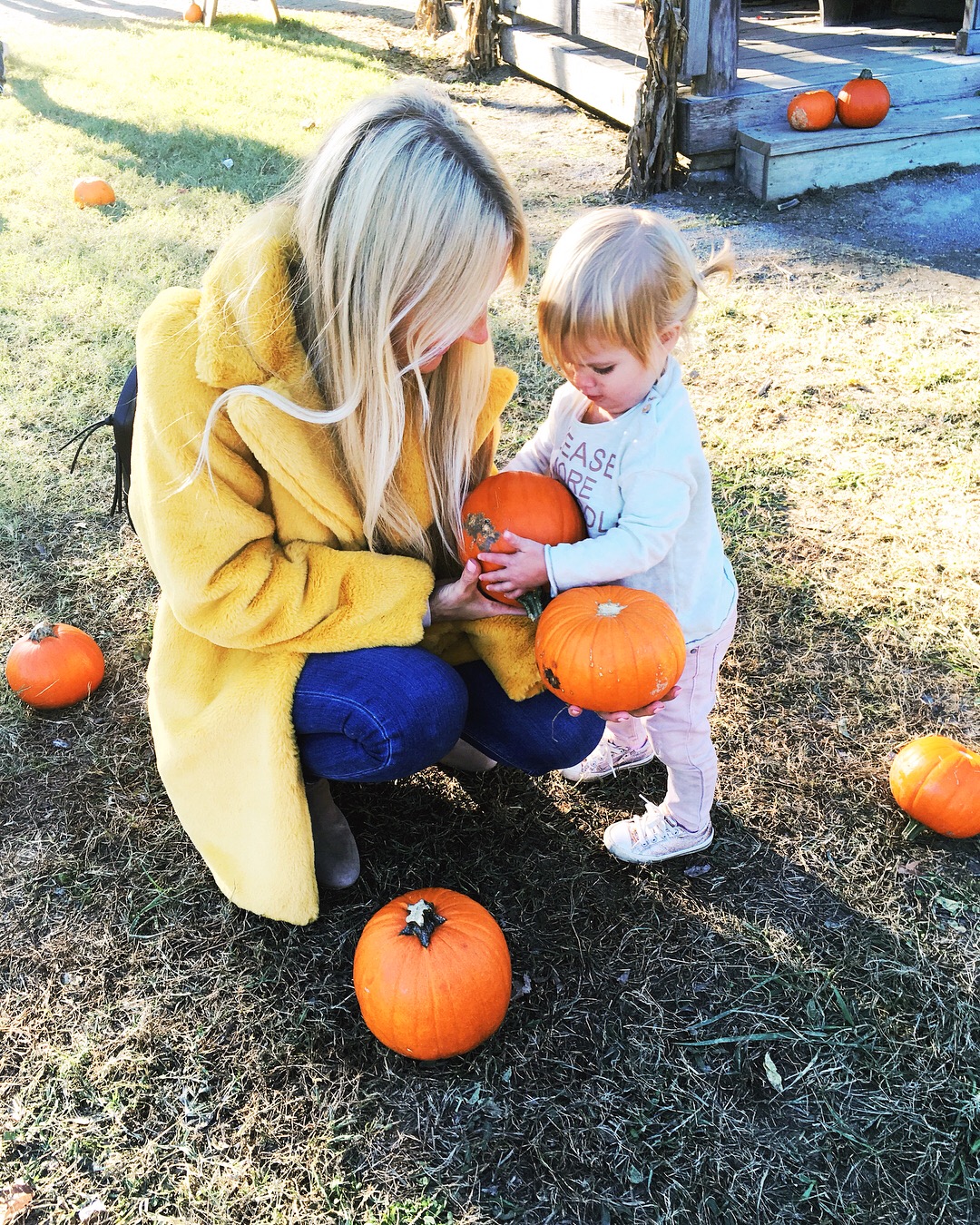 It has been a very long time since we had a healthy and happy baby around this house as we went through a terrible cold followed shortly after by a GI intestinal virus that lasted 14 days (!!). When we felt she’d been feeling better for a few days we were beyond thrilled this weekend to get out of the house as a family and go have some fall fun! We asked our pals the Larsons if they wanted to accompany us to a pumpkin farm just outside of town and so we all packed up and headed out to make the most of a beautiful fall day.

I haven’t been to a pumpkin patch/hay ride/corn maze kind of place in a long time so it was really fun to do that kind of thing again with Lola for her first time. I thought she’d be obsessed with the animals since she loves to see pictures of animals in books and try and make all their noises, and while she did like them, she was more interested in just running around and tossing small pumpkins lying on the ground as if it were a fall toddler edition of the Highland Games. We did buy one of the pumpkins though and I have plans to roast the seeds some night this week. Have you ever done that? It’s so good! 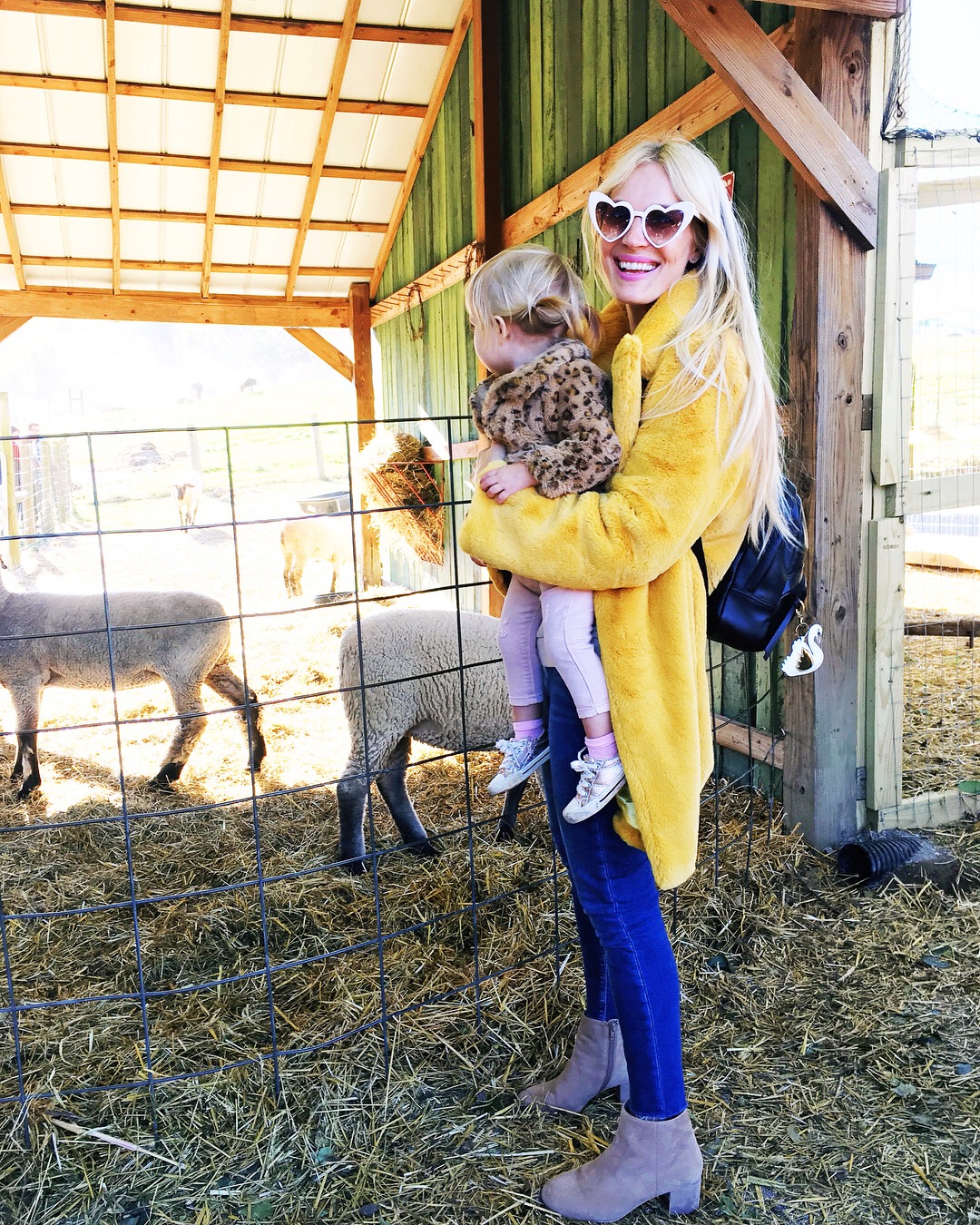 I also wanted an excuse to get out so I could wear this coat! Is that weird?? That yellow color is SO dreamy and I’m glad I took a chance on it. It’s not a super thick coat compared to some furry ones I have, but the color is so pretty and it’s crazy soft so it’s worth it to me! Also, I always highly recommend just using a small classy backpack as your diaper bag when you don’t need a lot of items. I usually just throw my wallet and a lipstick in the front and then I don’t have to bring my purse as well if I don’t want to and the backpack straps help keep it on while you chase toddlers around too. And it’s a “dude friendly” look for when Todd carries it around as well. 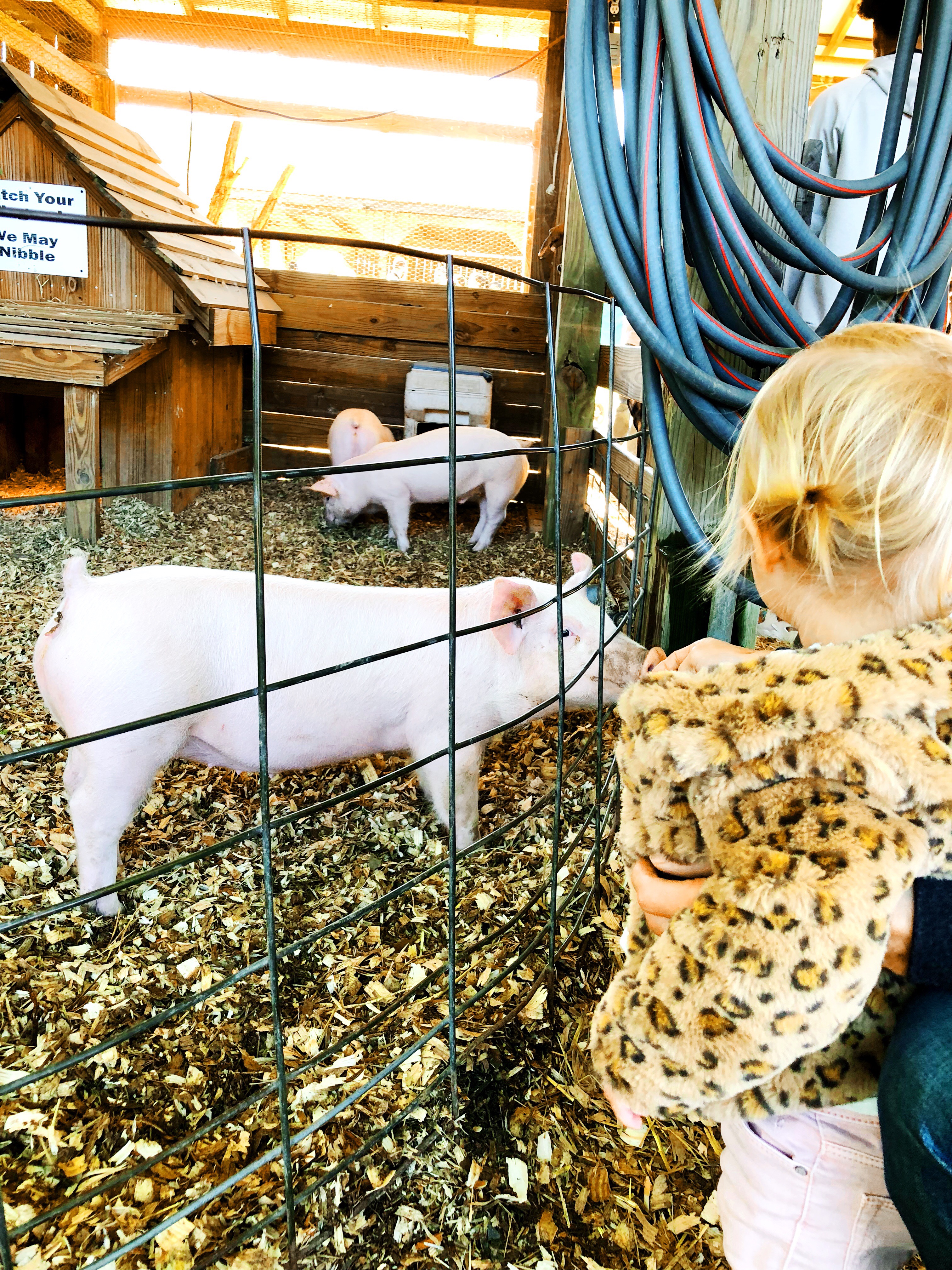 Piggies! I can’t see pigs in real life without thinking of the movie Babe. That’ll do Pig, that’ll do….

It’s so funny to me that I bought her that coat last Christmas but it still fits somehow. Almost all her coats from last year do, I guess coats are kind of meant to fit loosely? I think we’ll probably switch to one like this next year since I love the collarless look too. 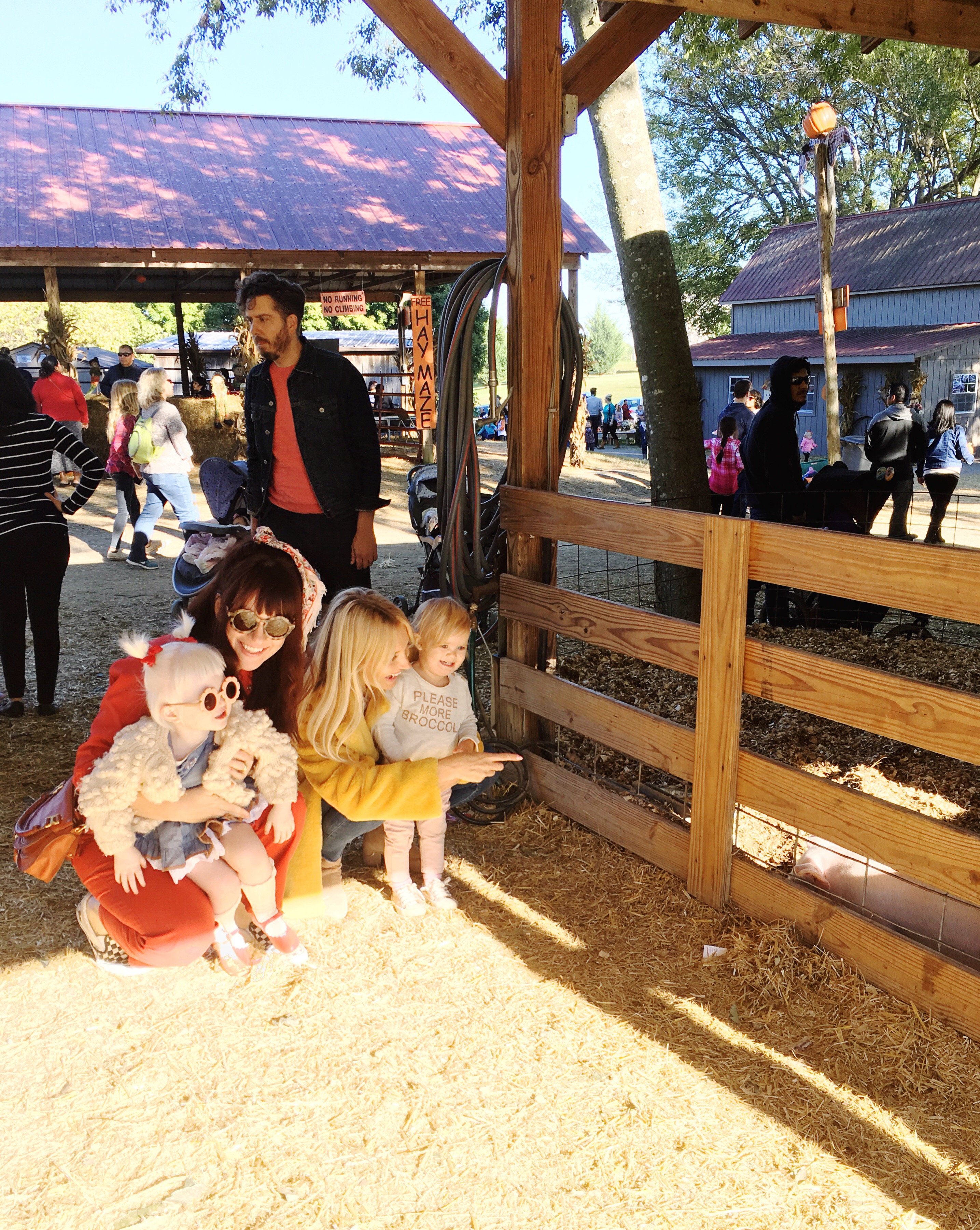 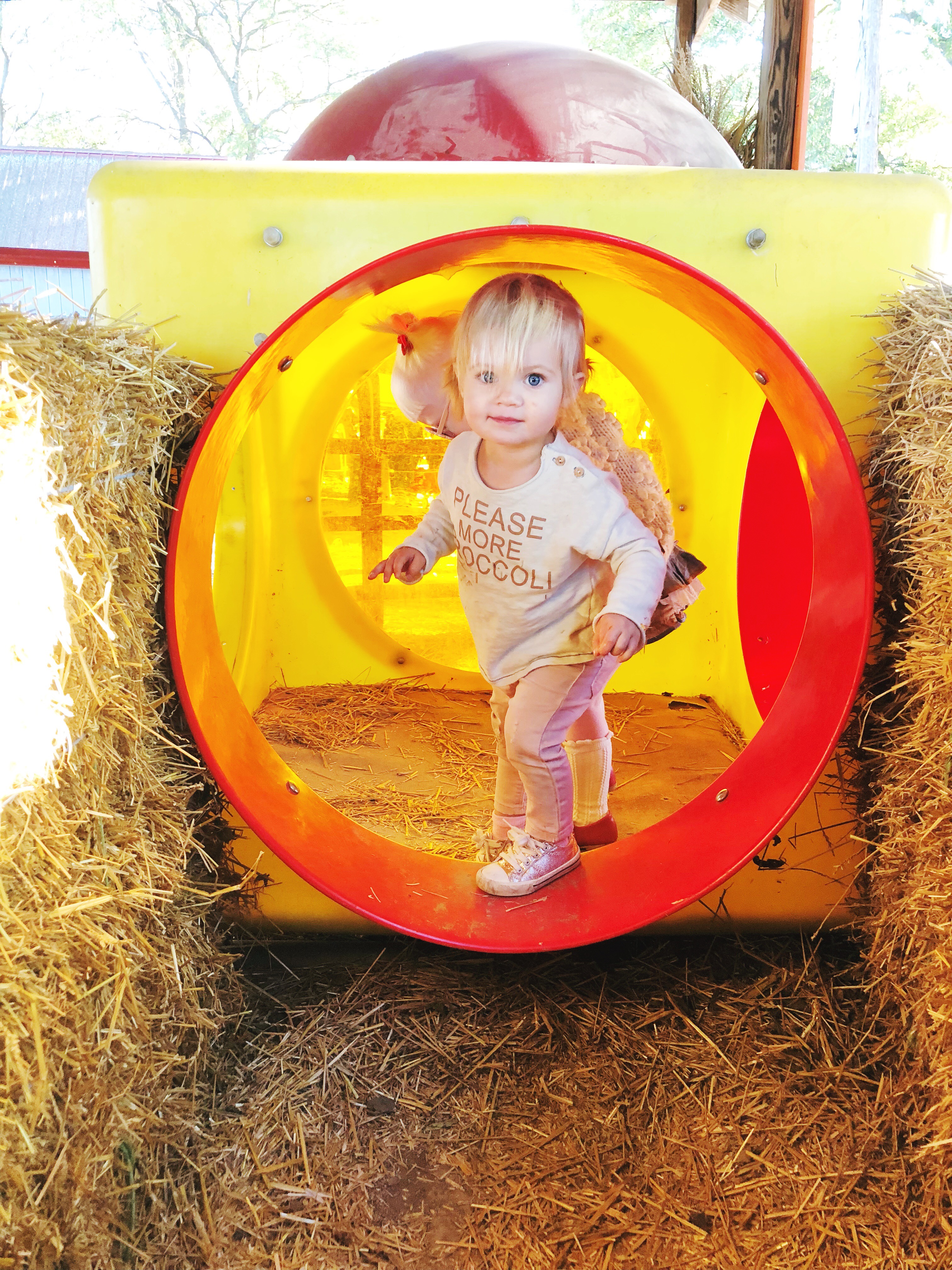 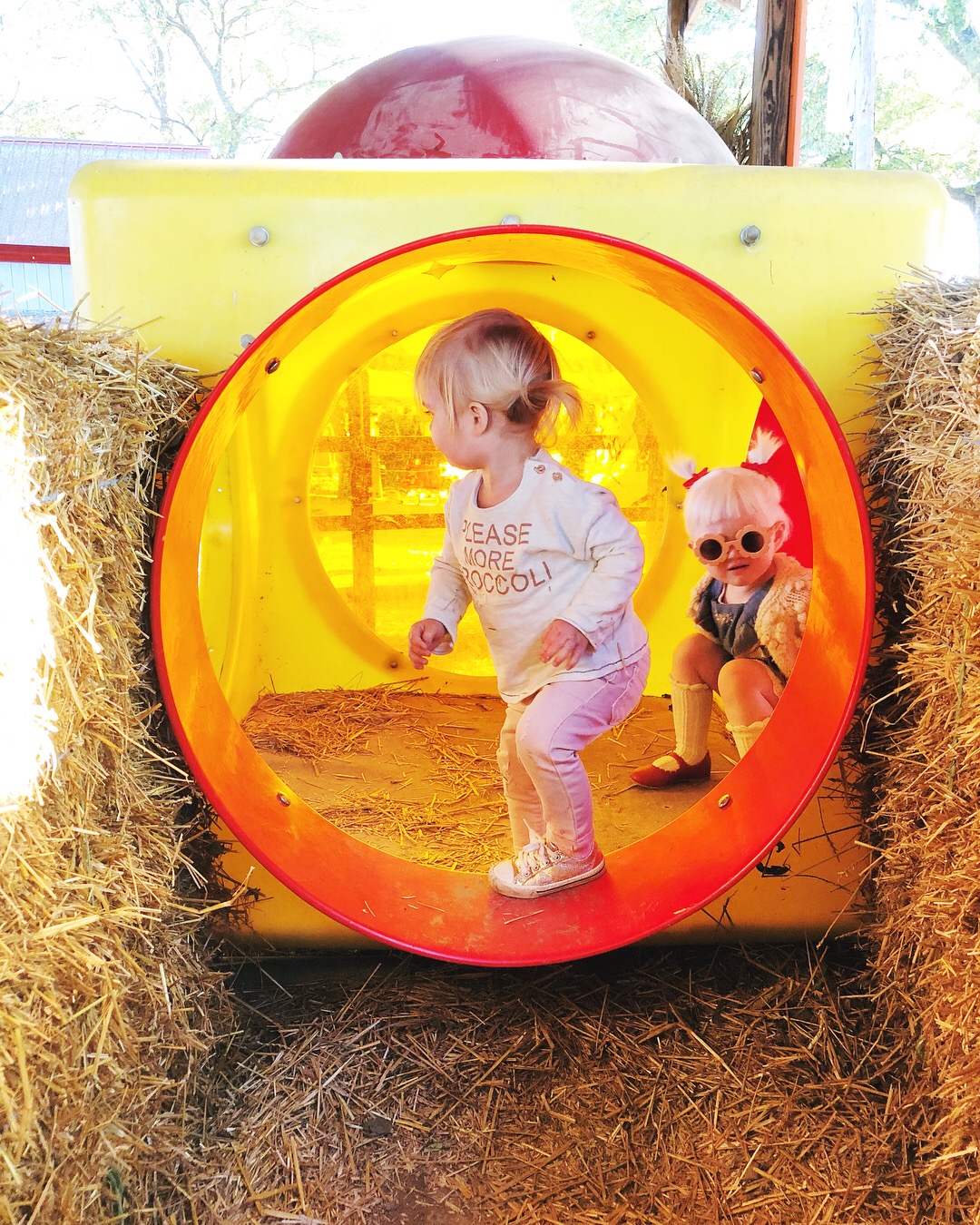 What little cuties! So fun to see them play together (and just wait until Lola can actually talk to her! I bet it will get even better then!). 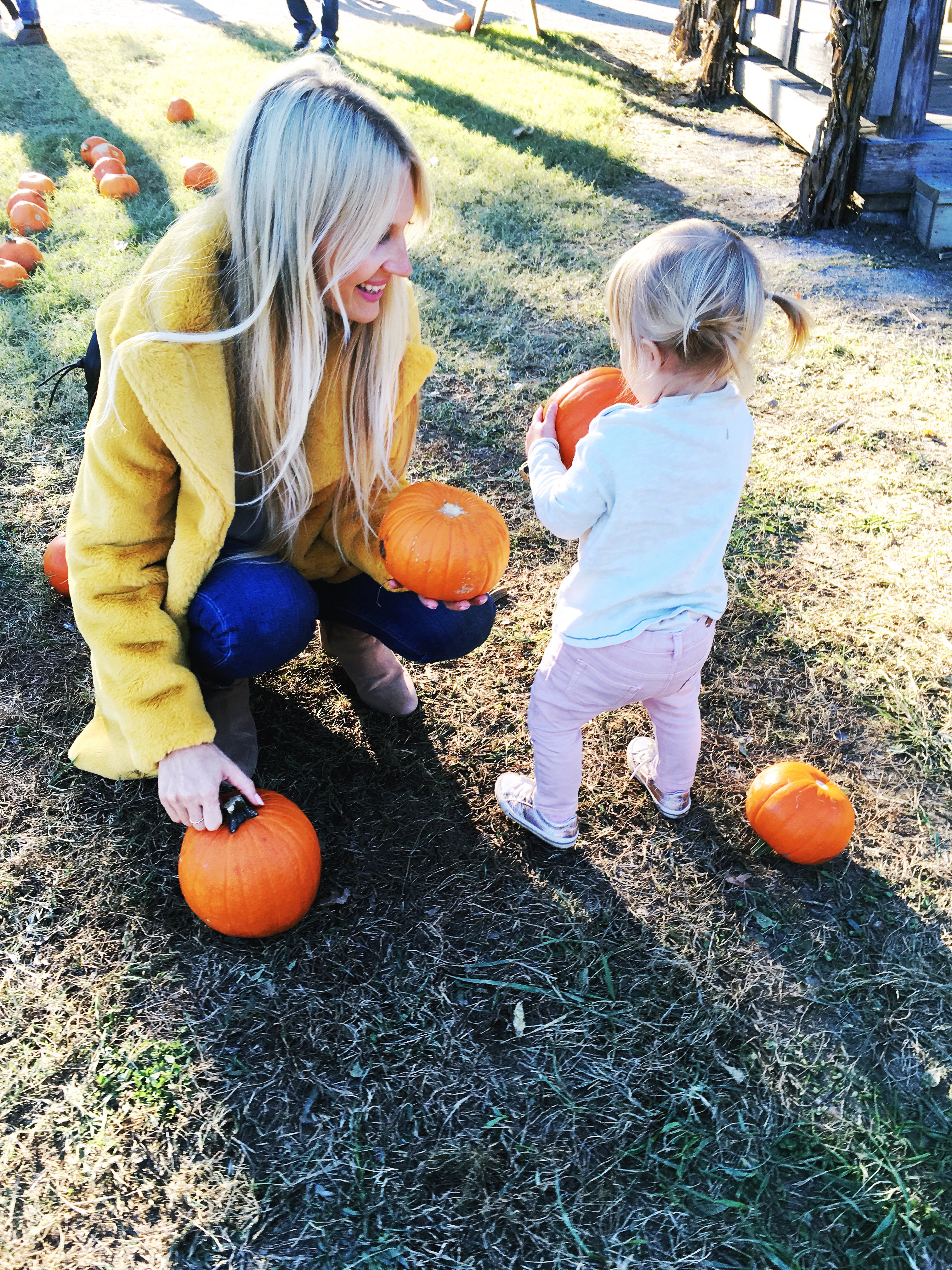 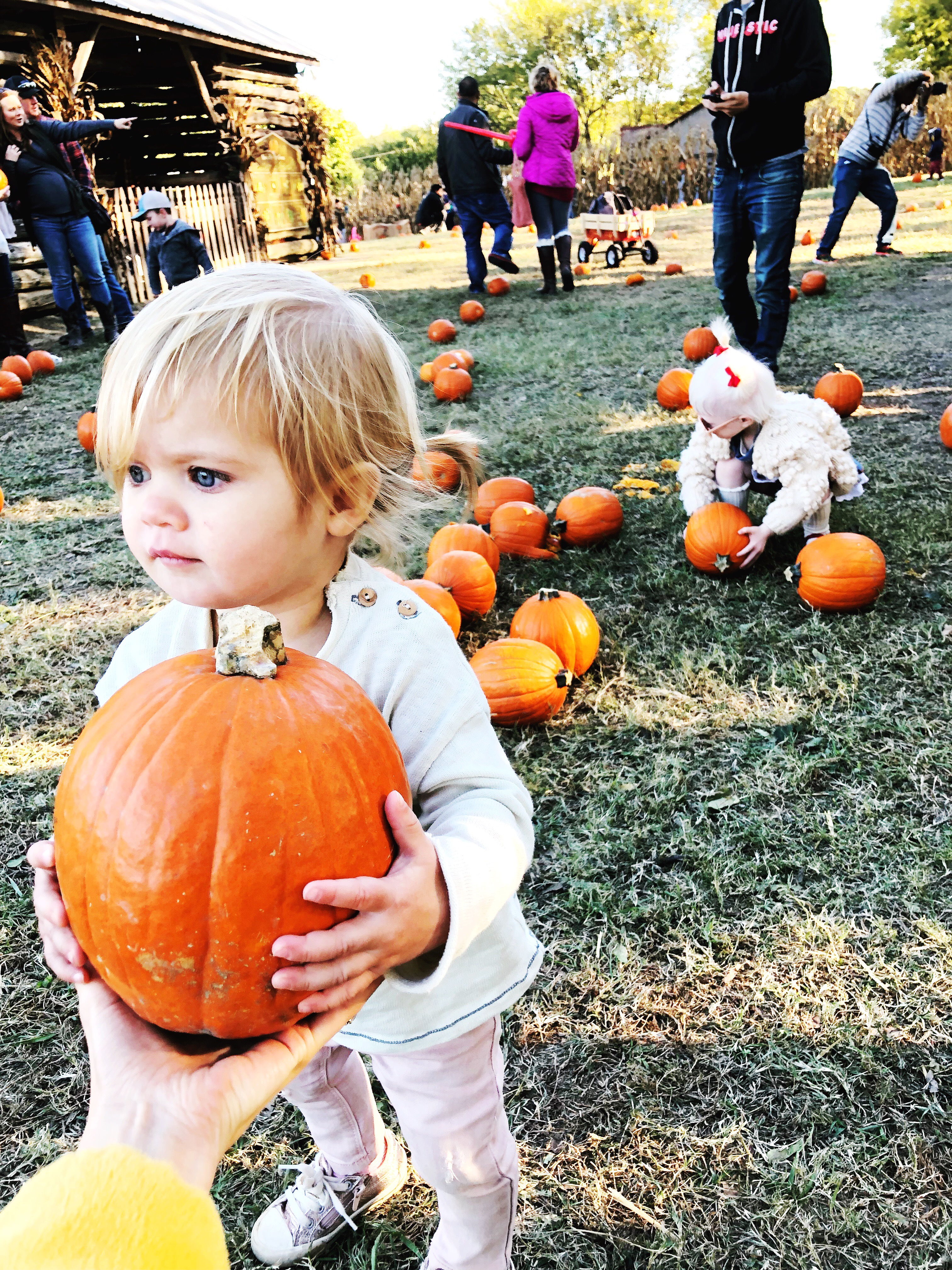 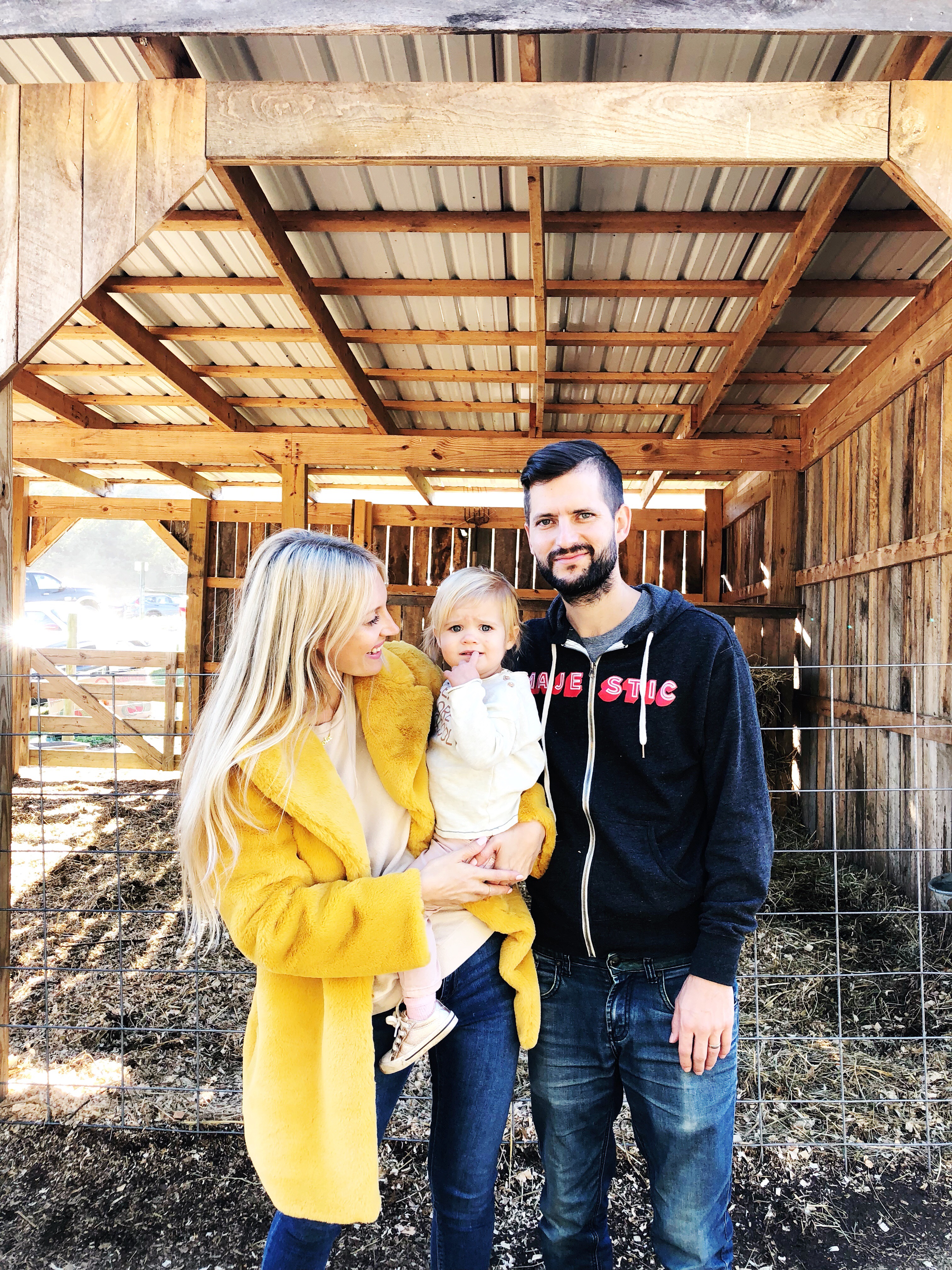 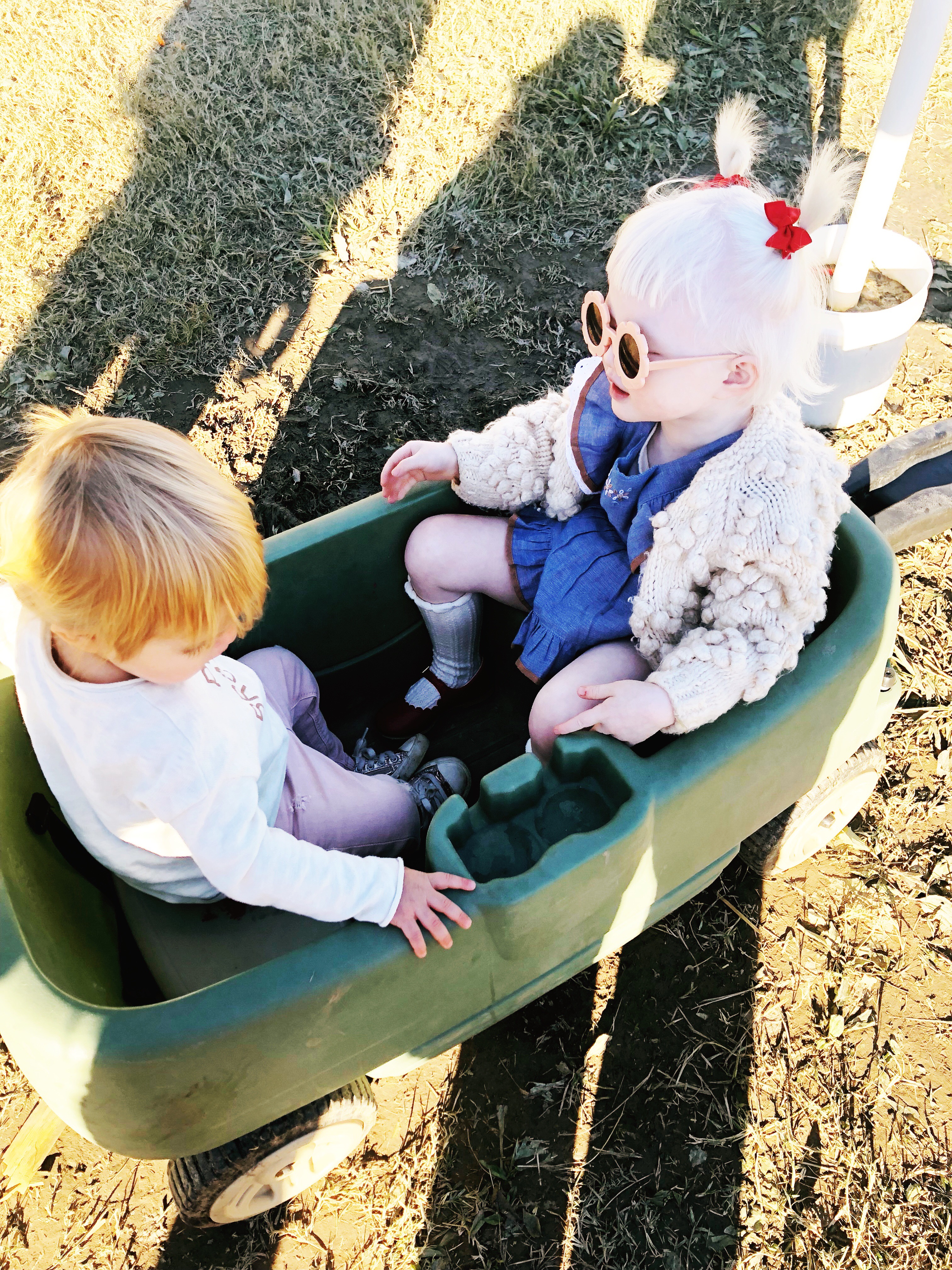 They both gave an A+ to the wagon ride. When I was pregnant Todd really wanted to get one of these but since we don’t have sidewalks in our neighborhood, I didn’t know if we would use it that much. Any other wagon-lovers out there?

Anyways, maybe next year we would try and go on a weekday since it was so busy on a weekend (I really wanted a hot dog but I didn’t want to wait in line for it sooo less people means faster snacks!). Even thought it was crowded, I’m so glad we decided to just go for it and make some fall memories with friends. Next time, we are totally hitting the snack bar though…I won’t make that mistake twice!

3 thoughts on “The Pumpkin Farm!”