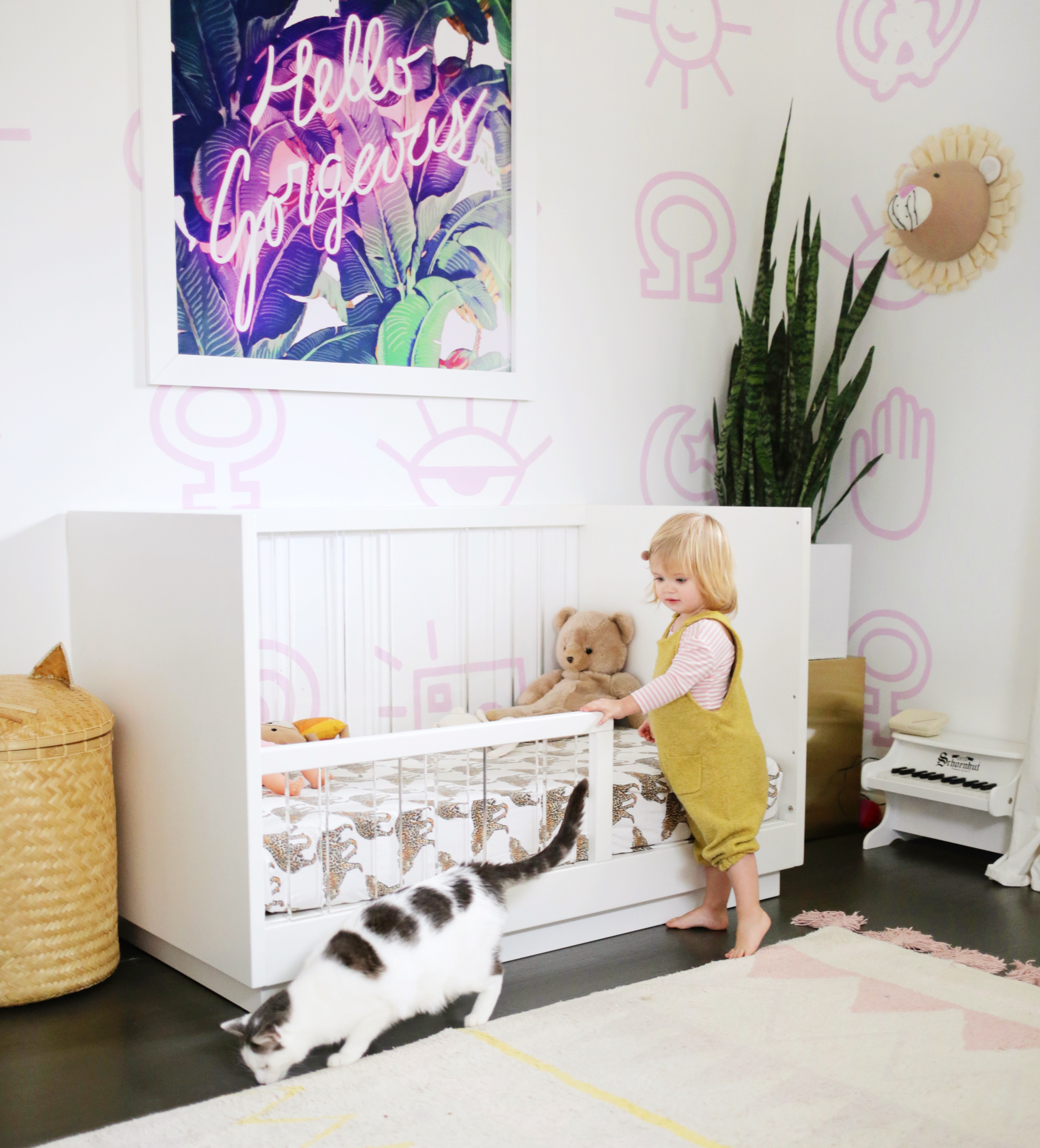 Ok, I’ve had two pretty good nights of sleep in a row which is a HUGE deal based on the past few weeks we’ve had. I thought it was just teething pain to blame for Lola’s early risings for a few nights but then we added in some extra middle-of-the-night wake-ups and difficulty falling asleep and I began to question what was happening. Then things got newborn-level extreme with Lola waking up after only being asleep for 2-3 hours at night and she would be up for 90 minutes or so, just totally awake, until I could get her back to bed only to wake up 3 more times before getting up for the day at the jolly old hour of 5:15. After that we had a night or two of her getting up almost every hour on the hour so I ended up sleeping on the floor next to her bed because it was too tiring to walk her back to bed each time she came into our room and I could just tell her from the floor to get back in bed and lay down again.

We tried the easiest to understand ok-to-wake clock I could find for a week, and while she thought the bunny on the clock was cute, she definitely wasn’t getting the concept of staying in bed just because the bunny was in bed. Like, did not care about that bunny and his sleeping schedule. Combine that all with being already exhausted at the end of each day from Lola’s extreme fussiness/clinginess/tantrums and it was a recipe for feeling completely insane and that kind of “drunk” tired that I used to feel back in the thick of the newborn days. I had to take Lola to an appointment after one of the worst nights she had and I told Todd I had to take a nap before leaving because I didn’t feel like I could safely drive her there myself. Now I realize that while I thought her extreme fussy behavior during the day was teething-related (and she is pushing through two molars right now so that’s why I assumed that) I now realize that it was probably mostly due to getting such poor broken sleep at night (and her short day naps) so she was feeling just as crazy and cranky as I was except that she was allowed to let it all out in public. Anyways, after a complete meltdown with 90 minutes of ugly crying one night after she finally fell asleep I started looking up some podcasts and blogs about what might be going on and that’s when I found out there’s such a thing as a 2 year sleep regression and ever single thing we were experiencing, they were describing! Lola’s done a lot of things a little early so going through it at 23 months isn’t that surprising for her but I just didn’t even know it was a thing to be prepared for so I had no idea why our life was completely upside down or what was happening.

At the same time based on reading more about it I think the fact that we had moved Lola to a toddler bed a month before was really making things worse for this regression. We made the switch because of my low back issues making it hard for me to get her in and out of such a low mattress in a crib (low so that she couldn’t climb out) and it went really well for a month…until she finally realized she could get out whenever she wanted. I think it just hadn’t crossed her mind before that! While I know that a lot of kids do super well moving to toddler beds early, we’ve just had weeks of struggling to keep her in the bed and all the taking her back in over and over, the ok-to-wake clocks, and other tricks just weren’t doing anything. The last night we spent over an hour taking her back again and again and I finally just came to the conclusion she wasn’t ready for all that freedom yet. It’s too temping for her little brain to stay in as she desperately wants to be out where we are. She wasn’t grasping the clock idea and I know for sure a sticker chart wouldn’t make sense to her yet either (although I do plan to try that clock again later—I think it’s so easy for little kids to understand with the pictures rather than just a color signaling when to get up and it cam highly recommended from a friend too).

Anyway, we decided to put the crib side back on (she had a convertible crib with a toddler rail like you see above so it was pretty easy to switch back) and I think we are just going to keep her in that until she’s closer to 3 or until I see other signs that she would be ready to handle all that freedom better. We are definitely not out of the sleep regression yet (but ohhhh man do I hope we are like 90% of the way through!) but it feels better to know why it’s happening and that it won’t last forever even though it feels like it. Just wanted to give you other moms a few months behind us a clue to what may be in store for you in case you didn’t know and for those of you currently going though it now hang in there. I’ve definitely hit my quotient for crying a few times over after she’s in bed and I do think it helps to just let it allllll out every so often or you feel like you will literally explode if you try and keep it in. Now, I’m off to get what sleep I can!