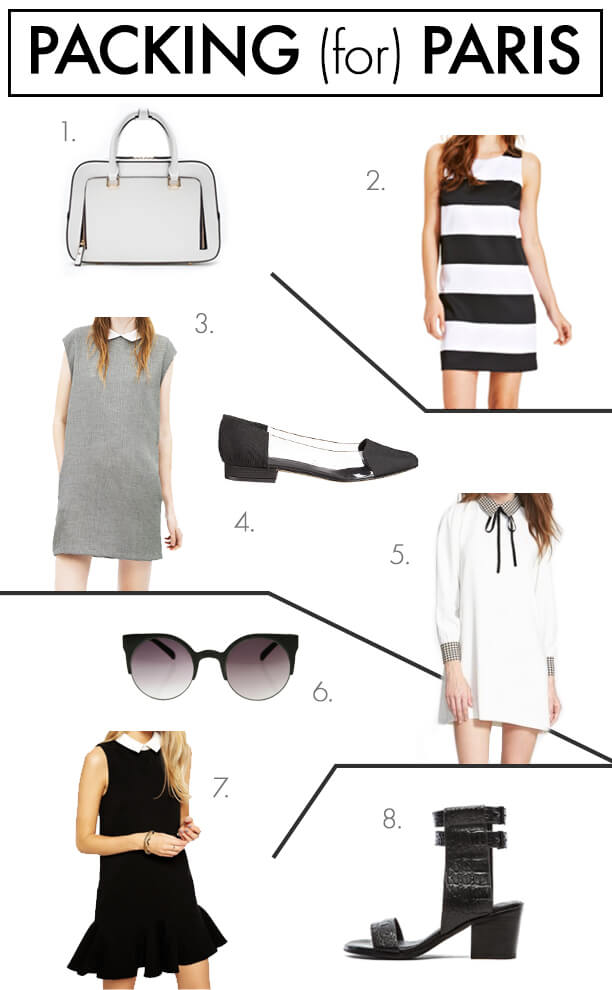 Ok. This is probably one of the most difficult things that I’ve ever attempted to do. I mean, hello?!? What am I supposed to wear in Paris? I mean it’s PARIS for crying out loud, this is not a drill people. I knew we wanted to do our trip this year at some point, but I didn’t know when it would be or how much notice we would have before we left, so I’ve actually been shopping for clothes since December to get a head start. How (you may ask) did I know what to buy if I had no idea what season we were going in? Good question. I knew we wouldn’t go in winter for our first trip (although I’ve heard you certainly have the city to yourself as the fall ends and winter arrives), so I knew I didn’t have to shop for chic parkas. That left spring, summer, or fall, so I figured dresses I could layer with jackets would probably the best bet. Is it summer? Take off the moto. Is it chilly spring or fall? Throw on some tall boots! I thought it was also best to go with all neutrals rather than invest in bulk editions of pink floral patterns only to actually go in October. Thankfully, the Parisians share my love for classic black and white color schemes, so that was totally fine with me. Here are a few items that I have my eye on for the trip (or already have in my closet awaiting its Parisian debut):

1. Zara City Bag: Super cute and small but has enough room to hold my big girl camera. Also has a cross body strap for when I get tired of carrying it.
2. Kensie Stripe Shift Dress: I don’t care if it is cliche to wear B&W stripes in France. It’s what I wear at home too, so no surprise there.
3. Zara Collared Shift Dress: Really comfortable, love the mini collar, and it has pockets to hold all the macarons I’ll snack on throughout the day!!
4. Vaneli Farren Flats: Flats are my kryptonite. I can’t figure them out, I don’t get the allure, and it’s nearly impossible to find ones that I think look good on me. Being only 5’3″, they always make me feel squatty and rather dumpy compared to my favorite heels, but a lot of walking is certainly on the agenda for France, so I made an effort to find a pair I liked. These seem pretty comfortable so far and I like the clear sides. Weirdly enough, just that little bit more of skin showing and the small heel makes the shoes much more flattering and legs appear a little longer than all the other flats I tried. I own flats!?!
5. Sister Jane Bow Swing Dress: Feels so Brigitte Bardot to me, and when is that ever a bad thing?
6. Round Cat Eye Sunnies: I wanted a pair of sunnies that were cool, but not so trendy that they will ruin all the photos I’m wearing them in 3 years from now (had that happen looking back on my Italy trip-ugh!). I think these are a good mix.
7. Asos Peplum Hem Dress: Another classic dress that can be worn with flats during the day when hitting the museums or with heels for dinner out. Pockets included!
8. Finders Keepers Cuffed Sandals: I wanted some open-toed shoes in case the weather is rather warm that week and these are pretty comfortable with a thick heel. I also have boots on call as well just in case the forecast calls for them…

Items that are très français but maybe pas pour moi:

1. Trench coats: Who am I? Inspector Clouseau?? I get that it’s a “must pack” but I’m more of a leather moto kind of gal (although I wouldn’t mind trying this one).
2. Blazers: I have two blazers in my closet. Both black. I have worn them exactly 0 times in the last 3 years. I should probably get rid of them but always think I might need them for something. Something like Paris where it’s the unofficial uniform? Nah…
3. Tweed (even Chanel style): Not to say that Coco needs to take any advice from me, but tweed always reminds me of a professor’s jacket with the leather elbow patches. I don’t have tenure at Harvard and I don’t wear tweed.
4. Oxfords: I tried. I can’t. I won’t.

Basically, it took me months to figure out the right Paris persona. I want to feel like the best version of myself without standing out in an obnoxious way or look like I’m trying too hard. I eventually settled on a bit of a 60’s mod feel with a little leather thrown in. French style looks oh so easy-breezy when done right (even if your tousled bedhead hair took a while to get just right), so even though I probably am overthinking it, I don’t want it to look that way. Less is more. And, ok, let’s get this out in the open. I AM an American, I AM packing sneakers, but come on! Look at these Michael Kors sneakers!! Totally cool. And I promise not to wear them with a fanny pack OR a visor of any kind. My word is my bond.

14 thoughts on “Packing for Paris”