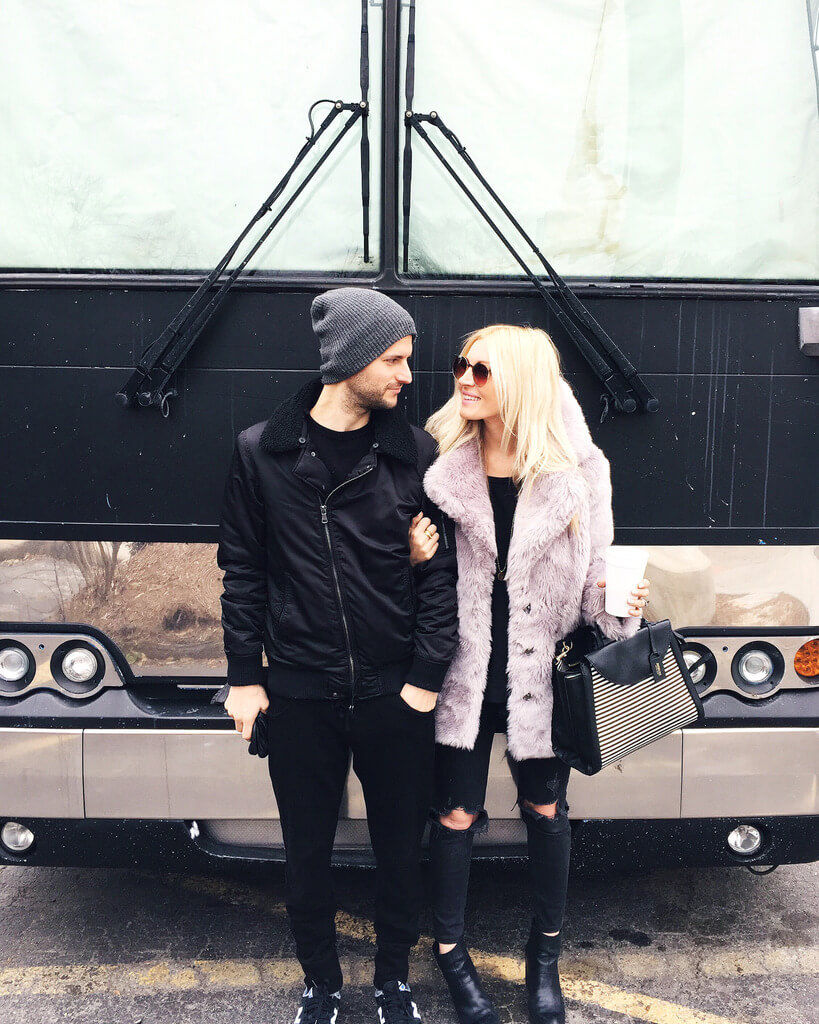 If you’ve ever seen the movie Almost Famous or the MTV reality show Bus of Love (the sequel to Rock of Love which is possibly the greatest reality tv show ever made), then you totally know what happens on a tour bus. The the young girls, wild late night parties, the drugs…well, sort of. I mean, don’t get me wrong, I’ve heard enough stories from the various crew members and bus drivers over the years to know that the aforementioned scene is totally normal for some bands, but if your band members are a more family-oriented crew, then it’s not quite the party you might imagine. I went out with Todd last week for the first few days of their US tour but the only young girls on the bus were two adorable pre-schoolers. My Little Ponies and Shopkins were everywhere and I’ve also been instructed which MLP I’m supposed to dress as for Halloween/their upcoming birthday party. Spoiler alert: I’m Lemon Hearts. I do remember one late night party, but it mostly centered around excitement over BBQ and a huge tray of banana pudding someone was kind enough to bring the guys. And as far as the drug use goes, well, I did pop two advil and use prescription dermatitis creme, so I guess you could say it got wild.

Anywho, here are some things that may or may not happen when living/riding on a tour bus:

1. You may never sleep soundly on a bus again when someone tells you that by law you have to sleep with your feet towards the front of the bus because it’s better to break your feet than your head if you crash.
2. You may wish someone had not said “it looks like it will be snowing all night while we drive through the mountains” right before you go to your bunk to sleep.
3. You may not be able peacefully snooze in your bunk because you have the gnawing guilt of the bus driver having to be awake and drive by themselves while everyone else is asleep. The fact that they slept all day while you were awake will mean nothing to you.
4. Your lack of quality sleep may also be due to the fact that there are a lot of extra people on tour that week and you’re sharing a bunk with your soul mate, your best friend, your raison d’etre, your oh-my-god-if-you-don’t-get-your-armpit-out-of-my-face-I-swear-I-will-end-you husband.
5. You may not know that it is definitely time to wake-up because it’s actually 2:30 pm (a fact that feels impossible to be true because the bunk section is a hermetically-sealed lightless tomb).
6. You may learn that you are not supposed to drink the water from the tap before the coffee you were making with it is ready but after you have already brushed your teeth with it.
7. You may wonder why there is a printed sign for every other thing you should know on the bus (including the wifi password and a list of the best brunch locations within walking distance) but no sign that tells you not to drink the H2O bacteria punch.
8. You may not hesitate to ultimately blame your imminent case of diphtheria on your husband because in reality he was the one that should have warned you in the first place.
9. You may inadvertently end up eating someone else’s Oreos from the food cubby because they weren’t labeled with their name and even though they should have labeled it with their name and you honestly didn’t know and that’s why you ate them and you still feel bad and wonder if you should pick them up one of those 6-pack of Oreos that they sell at the front counter at gas stations to replace the ones you ate.
10. You may be told that’s ridiculous and it’s #buslaw and they #shouldhavemarkedthem.

Well, I hope this little slice into bus life has been informative for you. I was certainly sad to leave Todd just a few hours before Valentine’s Day, but glad to be back in my own bed where you can believe I spread out all over that mattress. I’ll be back out again in another week and hoping for some warmer weather in sunnier states. I’ll be snapchatting the experience again if you want to tag along (find me under gummergal). Until then, I’ll be drinking that water straight out the tap yo!!