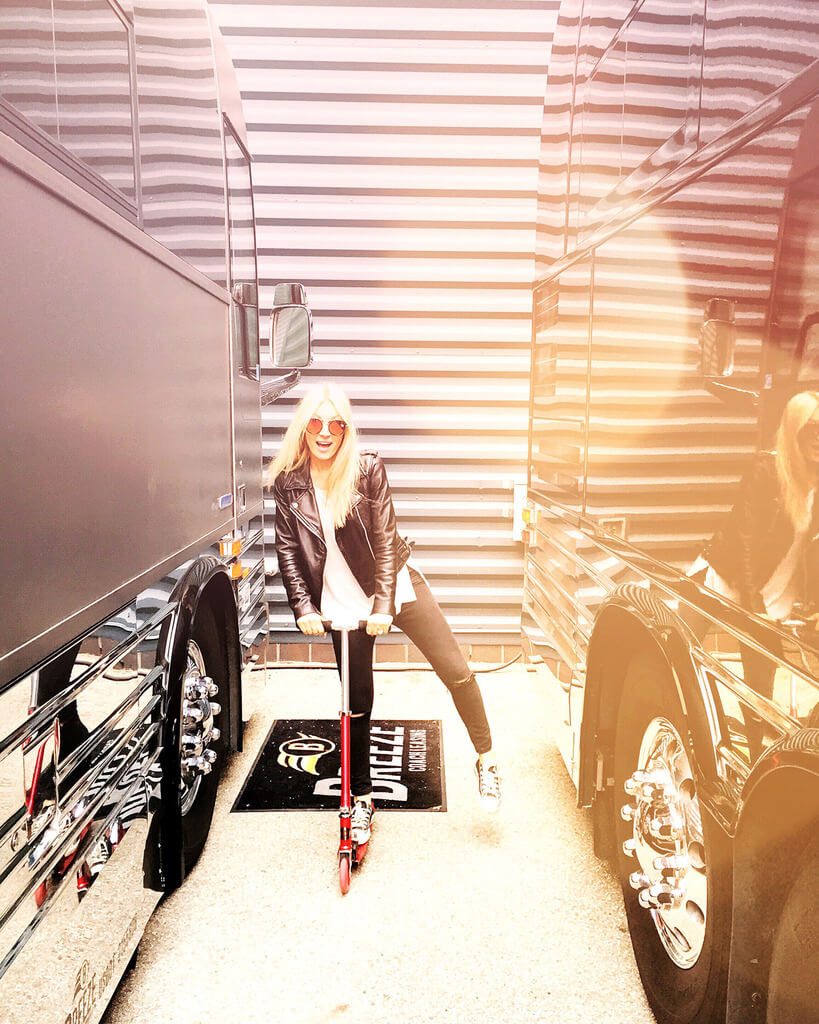 As you may or may not know, MUTEMATH has the amazing honor of opening for Twenty One Pilots on their summer arena tour this year I recently got to tag along to support Todd for the opening week.  It’s been a few years since Todd has gotten to do the arena circuit (last time they opened for Linkin Park and Incubus) so it’s been fun to be in such large venues again and get some of the perks of the arena tours (like ALL DAY CATERING!!). I just found out only a few weeks ago that I have moderate to severe food sensitivities to eggs, dairy, rice, and soy, so being out on the road and eating well was quite a challenge for me at times (especially on our days off with only chain restaurants and fast food options). The good new is that most of the other days there was awesome vegan-friendly catering options that were really helpful.. 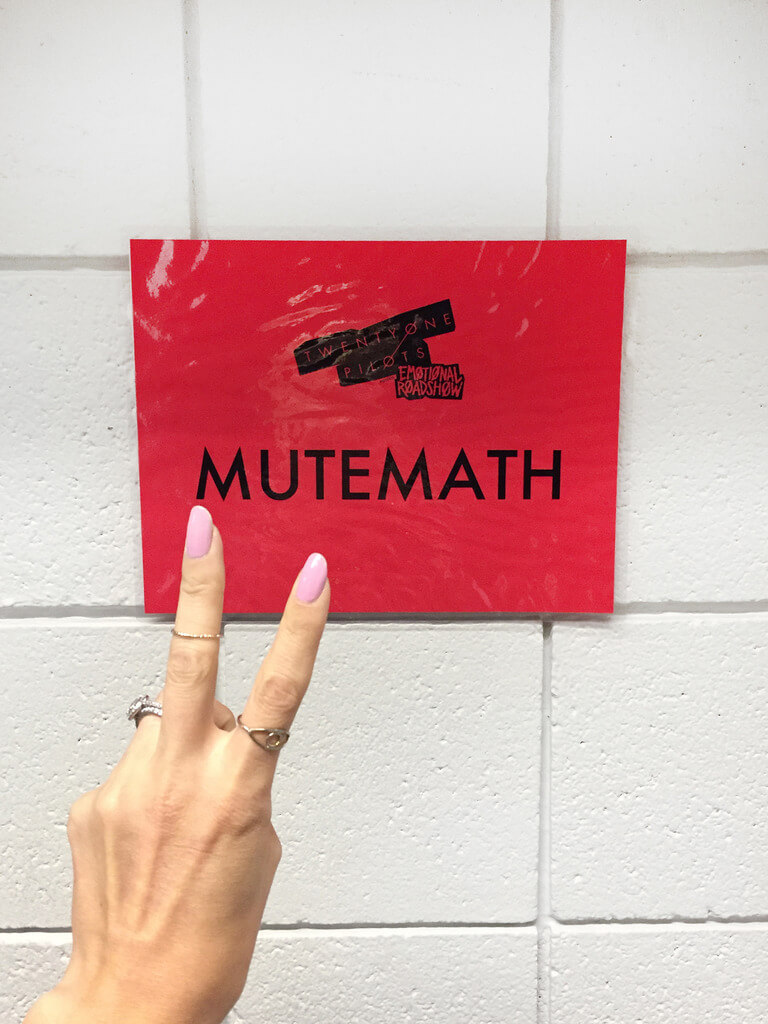 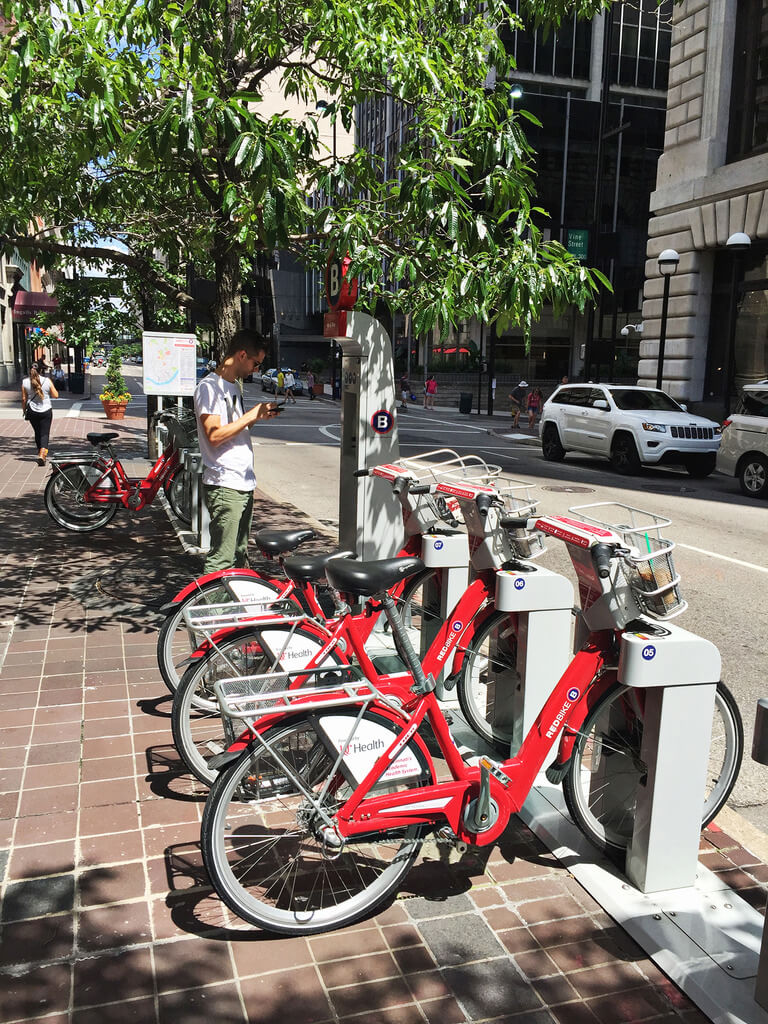 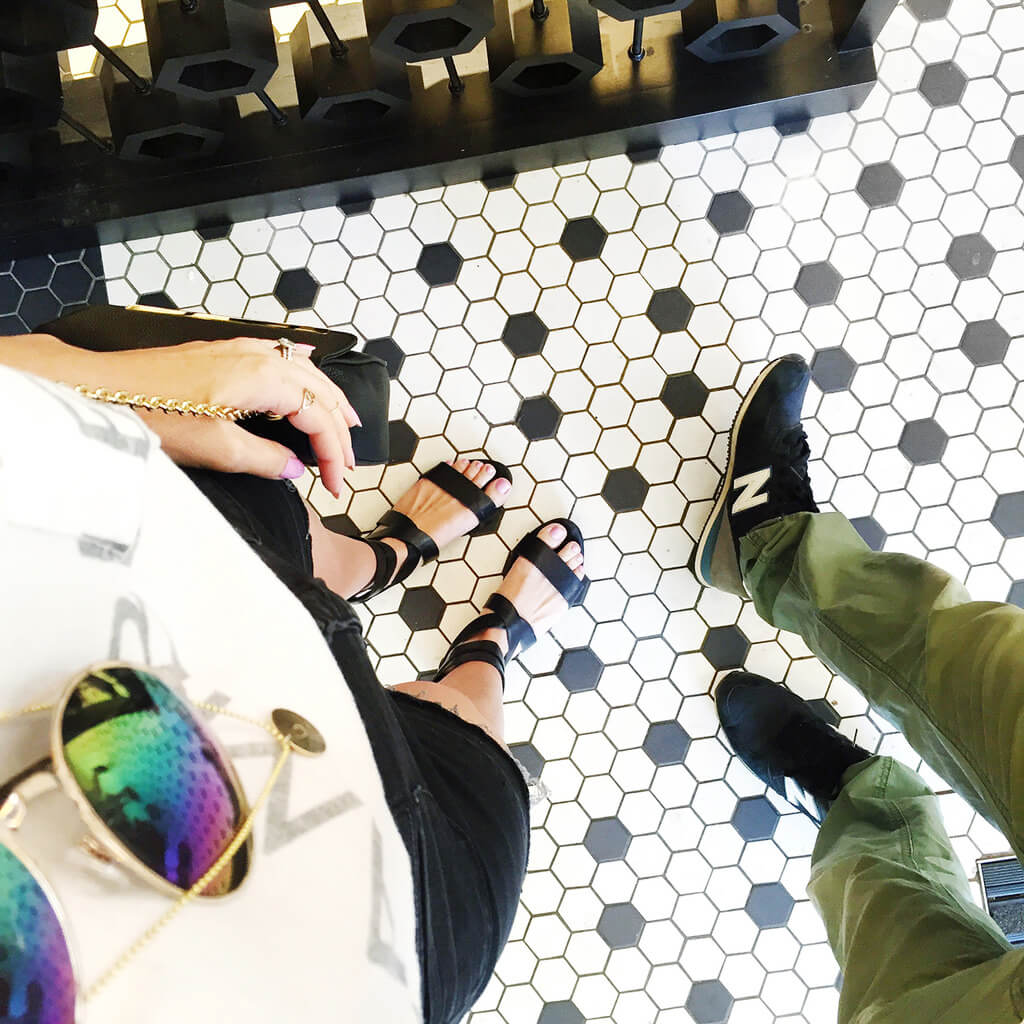 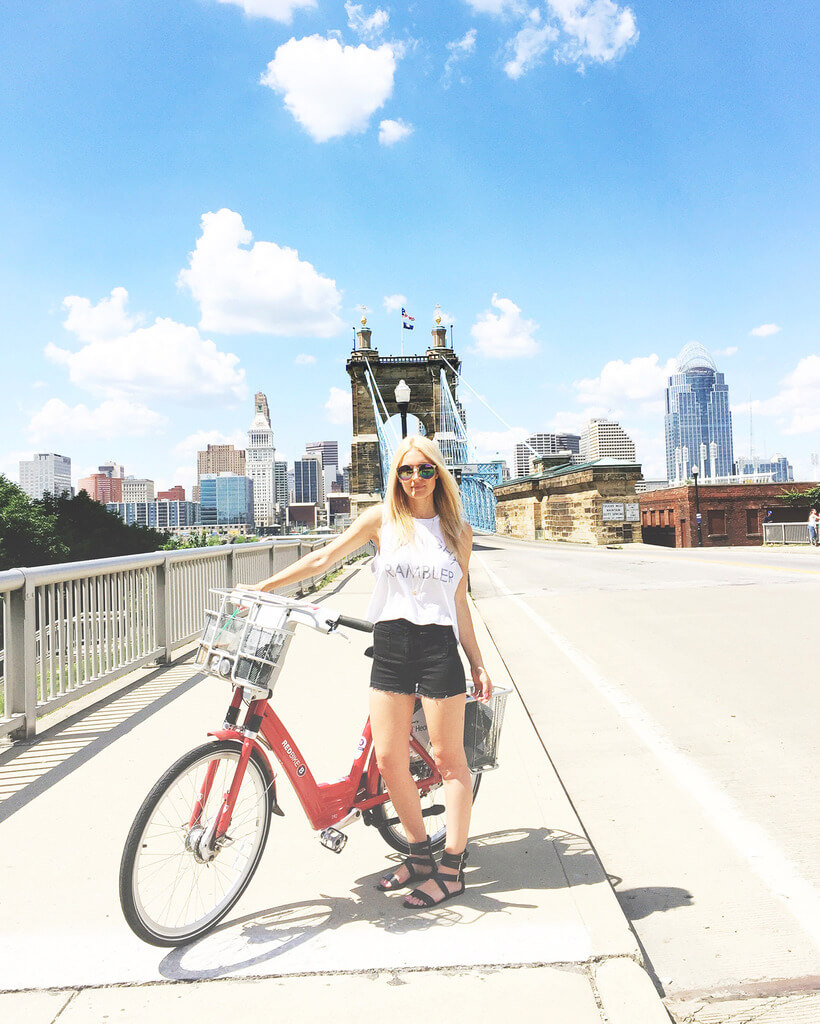 Our first two days of the tour were in Cincinnati with one rehearsal day before the opening night of the tour. What was amazing to me was that people were already lined up to get into the GA floor area of the arena the morning of the day before the show. They even slept outside overnight to stay in line! It was so cool to see that people can still have that level of fandom for their favorite band—amazing!! Since the first day was mostly for crew to set up the show, Todd was pretty free and we got to ride bikes around the city and sneak in a late night movie at a theater nearby. 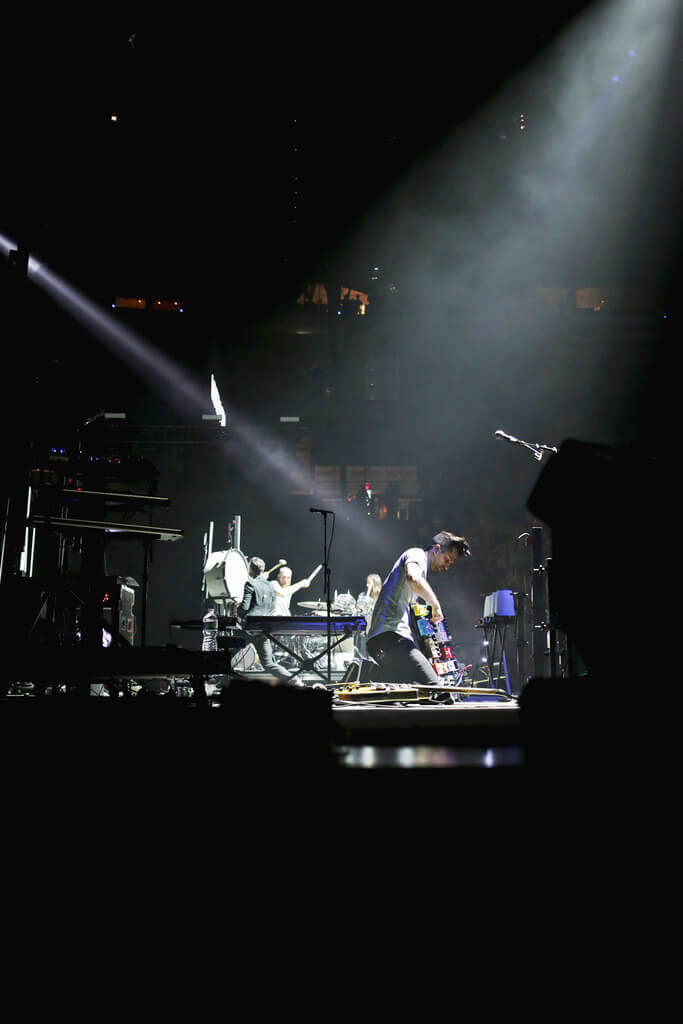 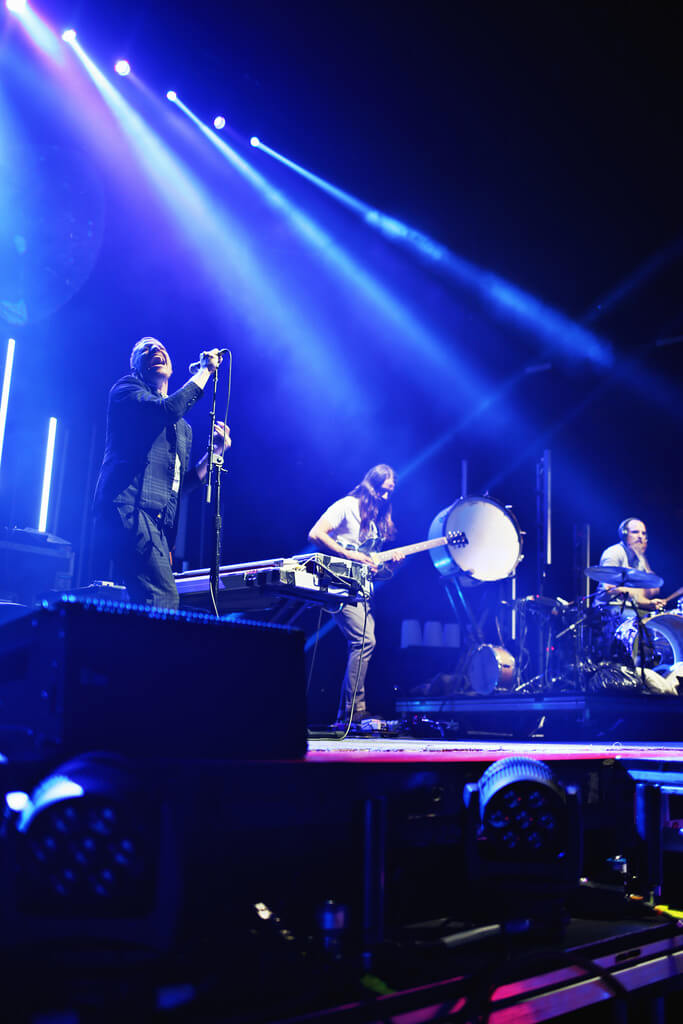 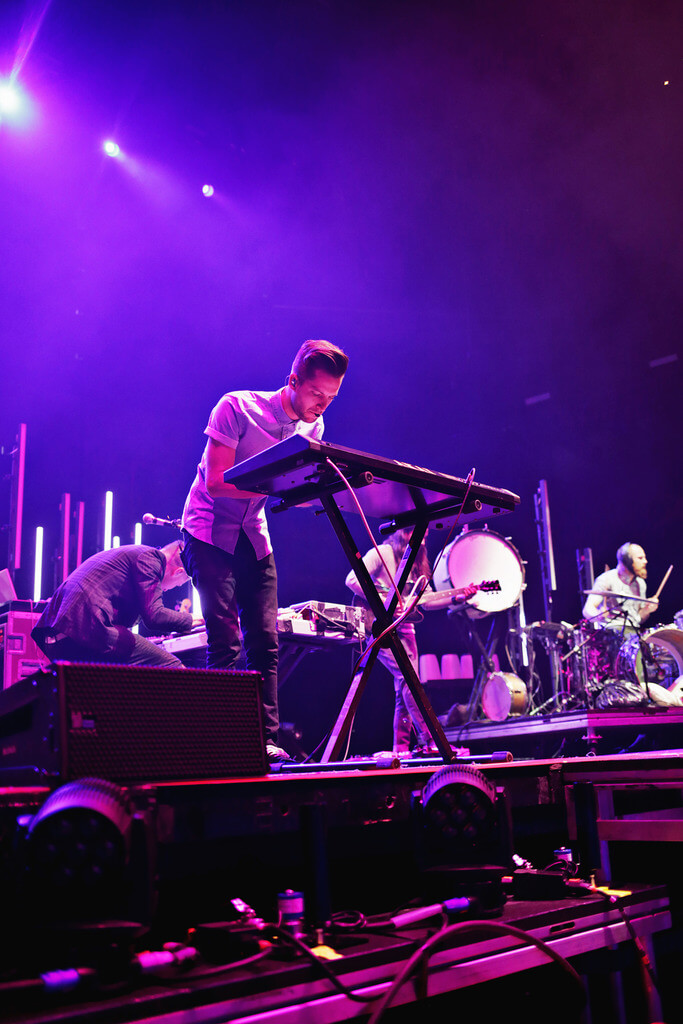 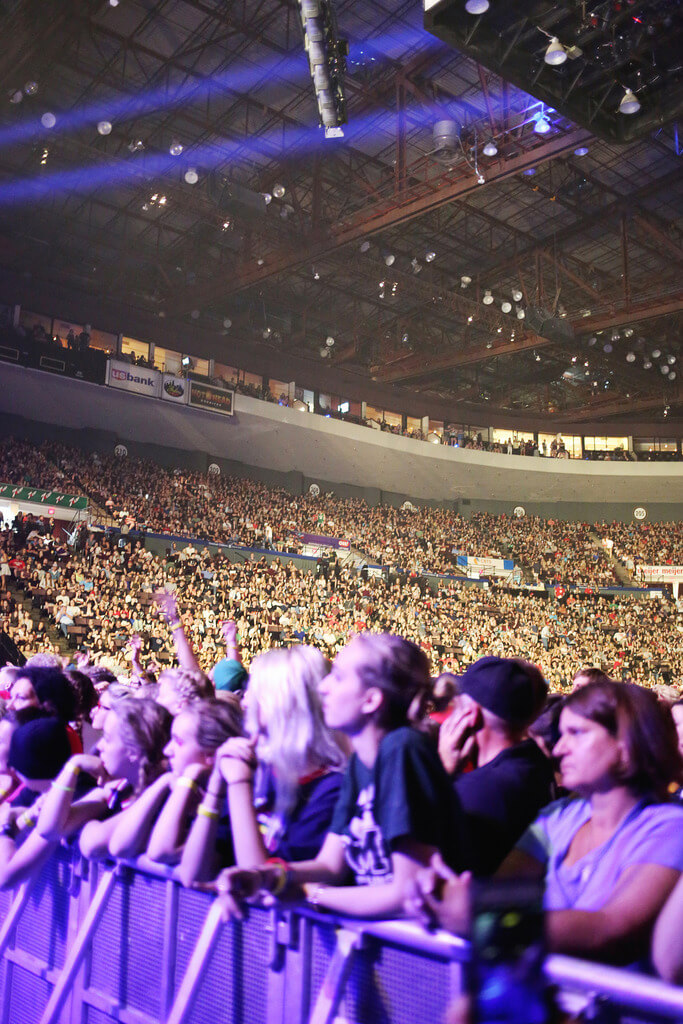 The next day was full of anticipation and it was so fun to get to watch the first show of the tour and experience everything with the crowd for the first time. One perk to MUTEMATH being an opener rather than the headlining band is that they have a lot more free time during the day than they did out on their headlining fall and spring tours (I think one day I saw him for a total of an hour on one of those tours—so busy!). 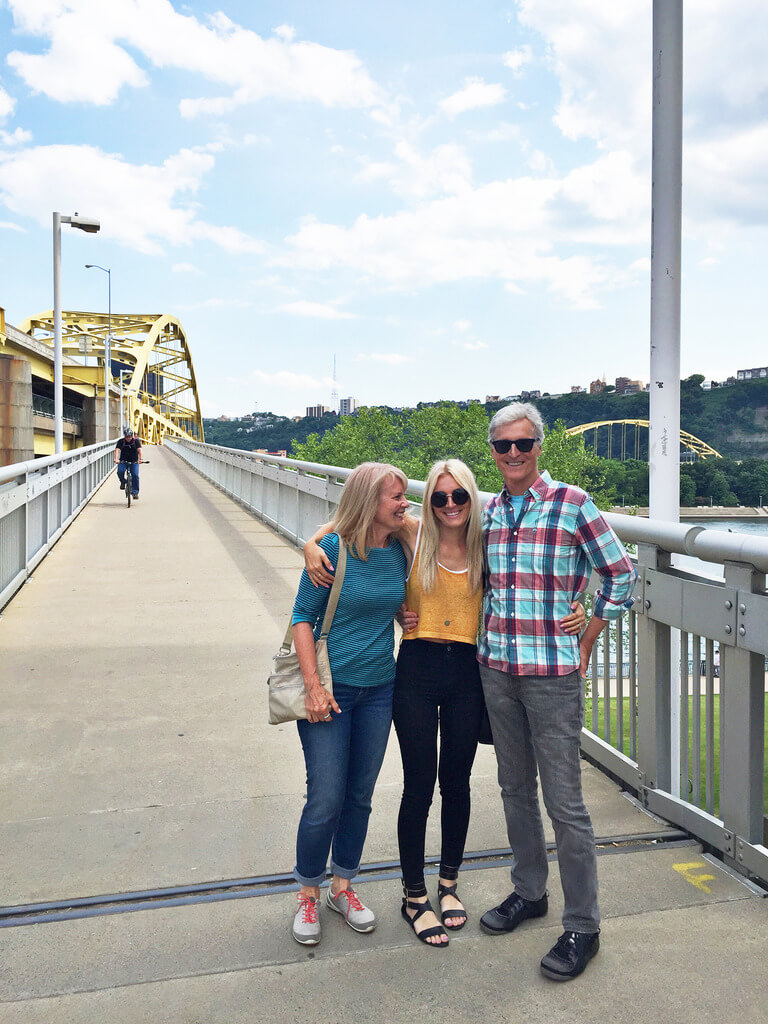 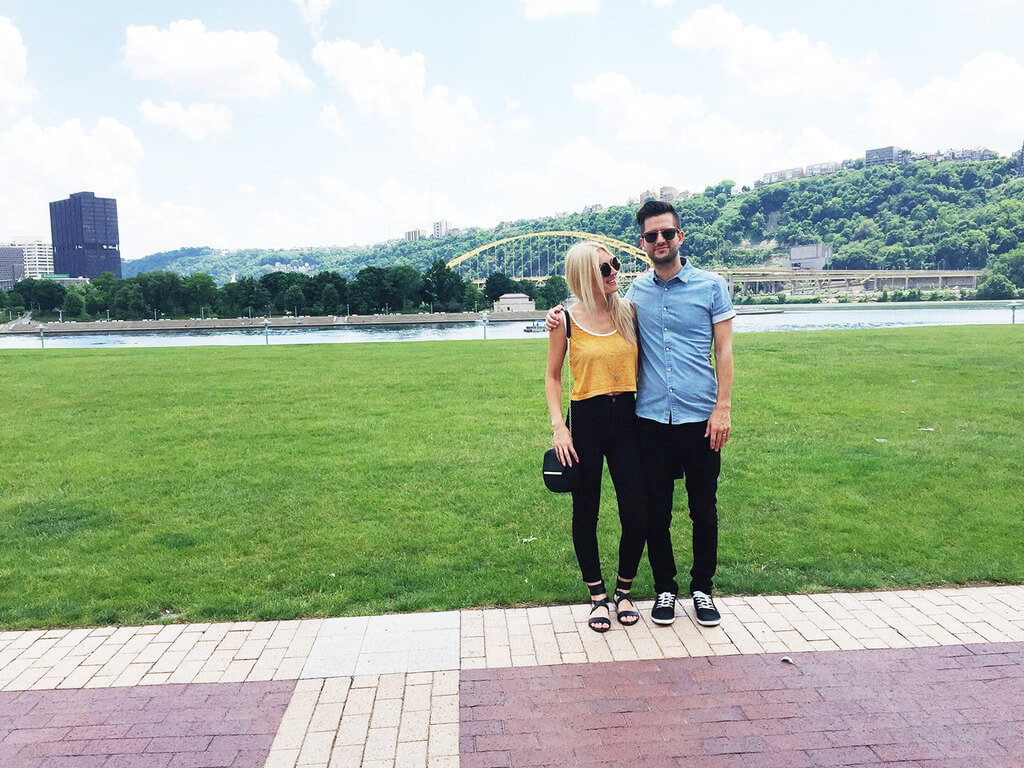 Once the Cincinnati show was over we moved on to Pittsburgh (which is my hometown)! I got to see a bunch of our favorite people that day (including my parents and some college pals) and my brother and new wife Sarah even came straight from the airport from their honeymoon trip to see the show and hang out for a bit. It was a super hot outside show and I felt to bad because there were teenage girls passing out all over the place from the combination of heat, excitement, and probably not drinking enough water while waiting in line all day. DRINK ALL THE WATER GUYS!! It’s always special to see a show with my family and friends so it was probably my favorite day of the tour that week. 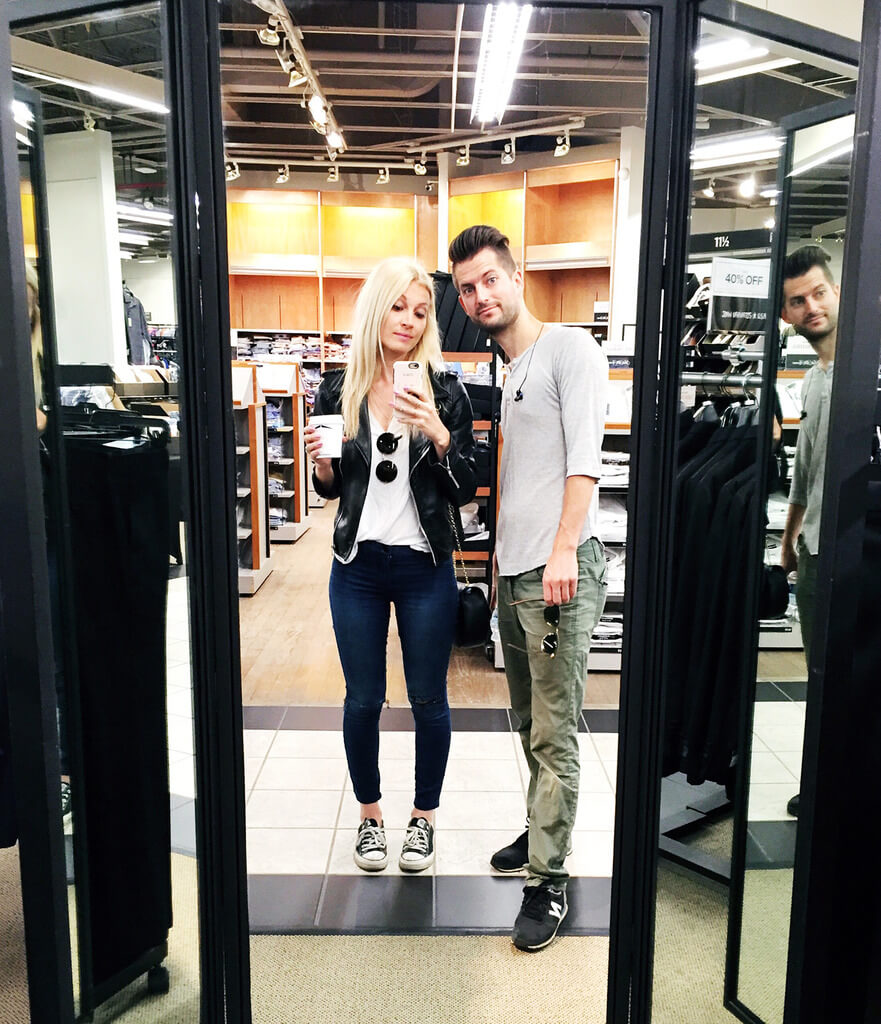 After Pittsburgh, we headed up to Detroit where we had a day off before an arena show there. You usually have a hotel room to use on a day off so you can still take a shower and what not and we were parked right by a pretty big mall too which was handy. We spent a few hours shopping before I tagged along to watch Todd play a round of frisbee golf (his favorite thing to do on tour) with their manager Chris. I basically watched them root around in large patches of poison ivy for lost discs for 2 hours, but I guess that’s better than sitting on the bus by myself! 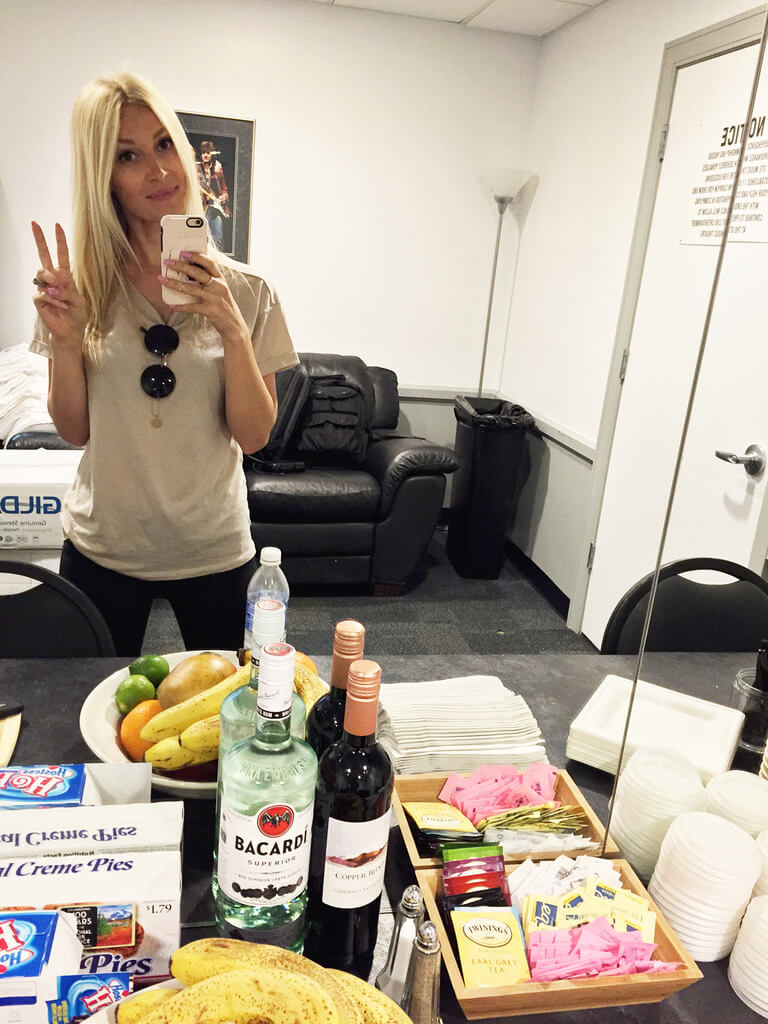 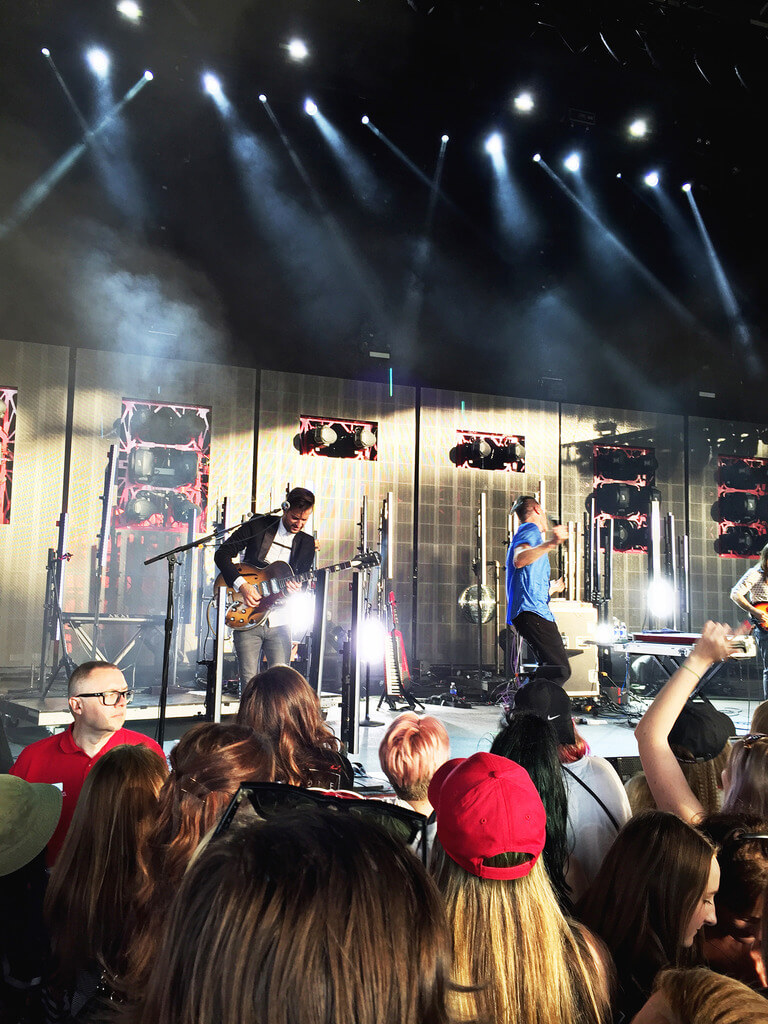 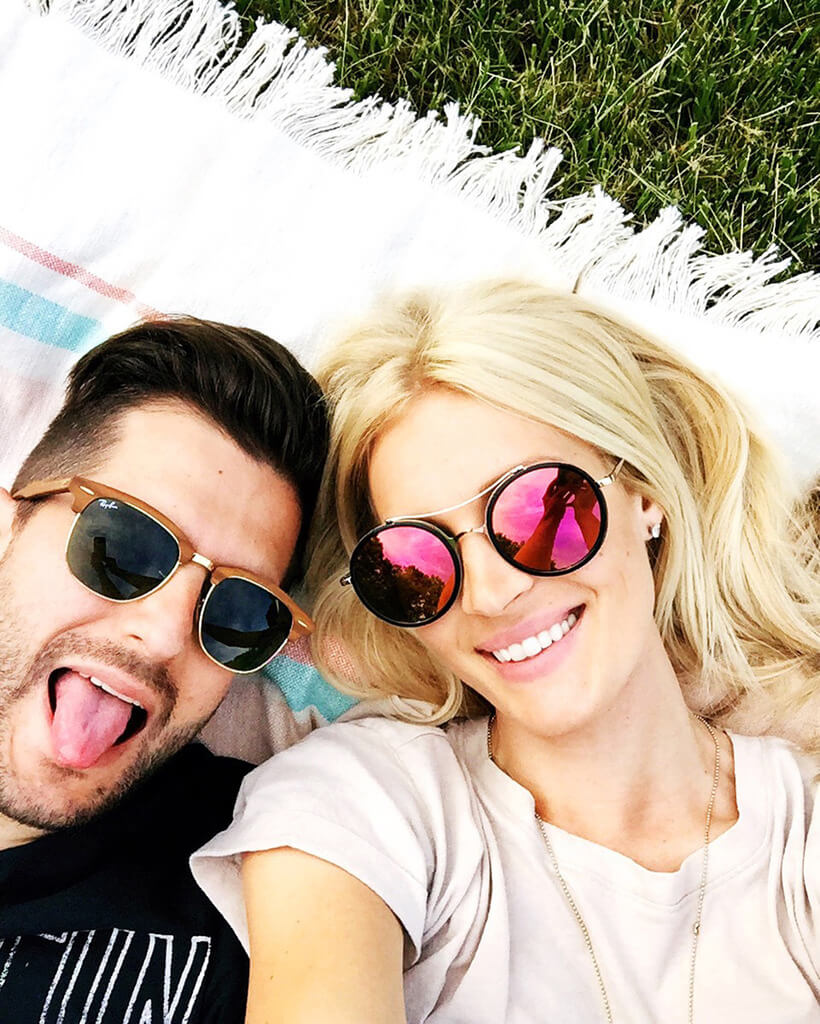 The show in Detroit was kind of in the middle of nowhere so we couldn’t really walk to any stores nearby but we did sneak out the back and walk along a golf course that was pretty. The arena was next to a ski slope and had waterfalls and pretty landscaping so you kind of felt like you were at a park which was nice. We bought a blanket on the day off and tried to lay and read in grass patches where we could. The “trapped in a parking lot” vibe can make you crazy pretty fast otherwise… 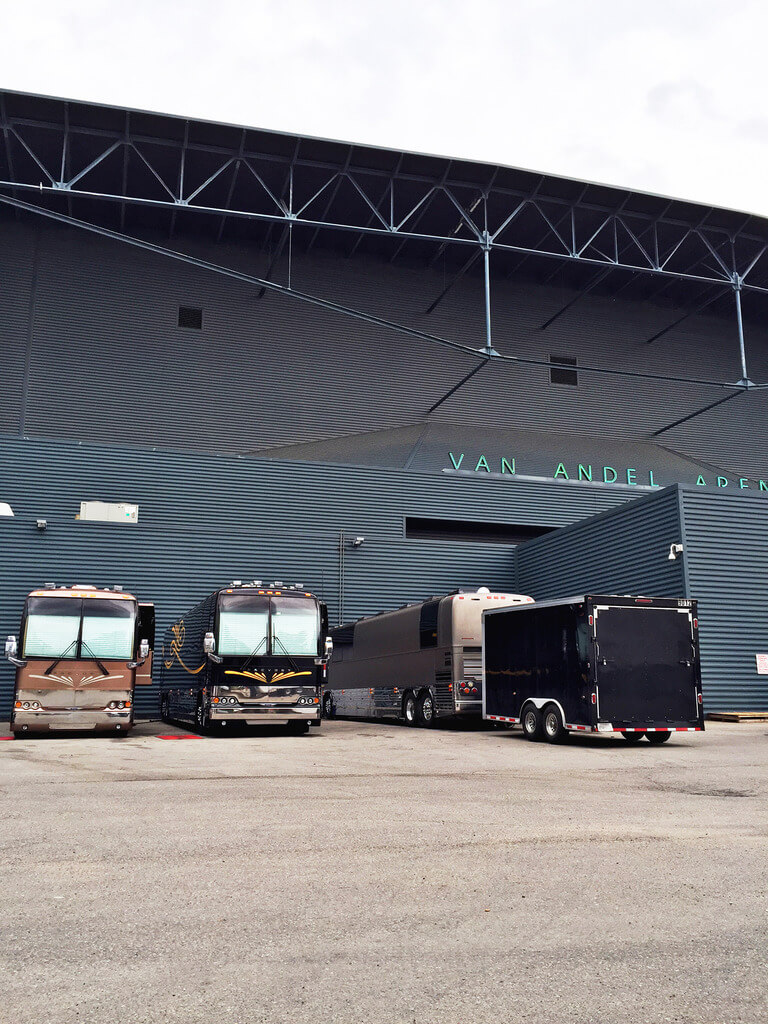 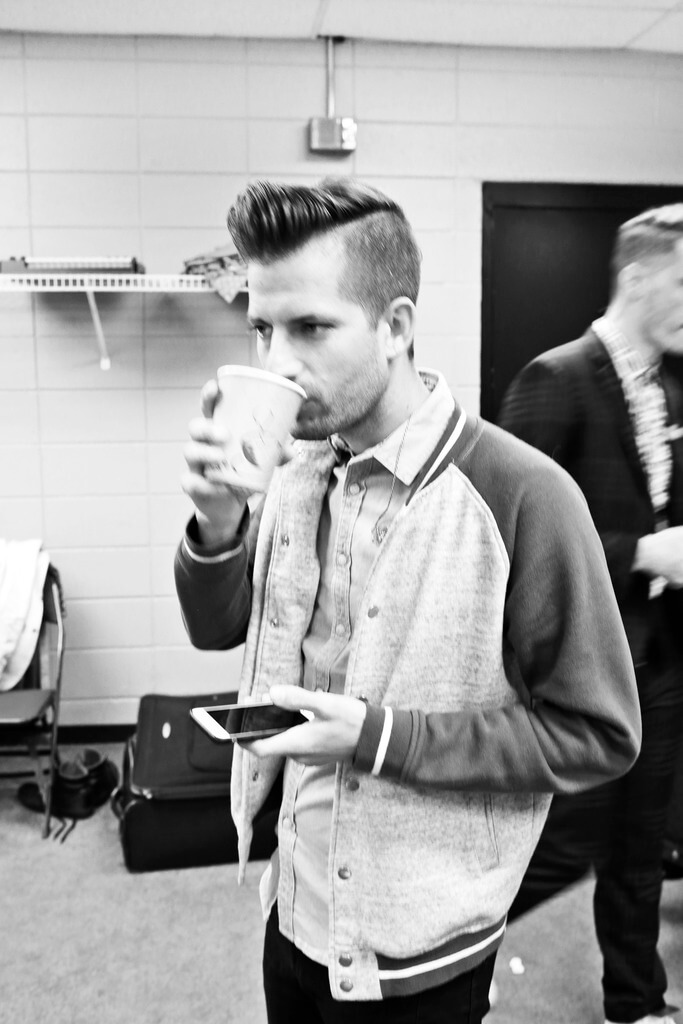 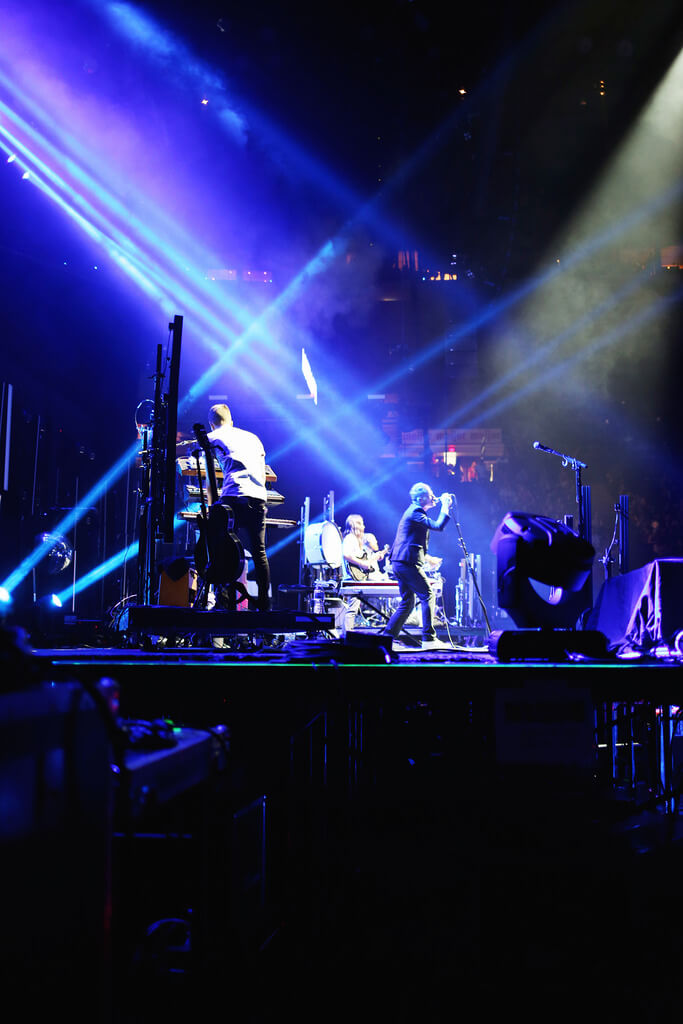 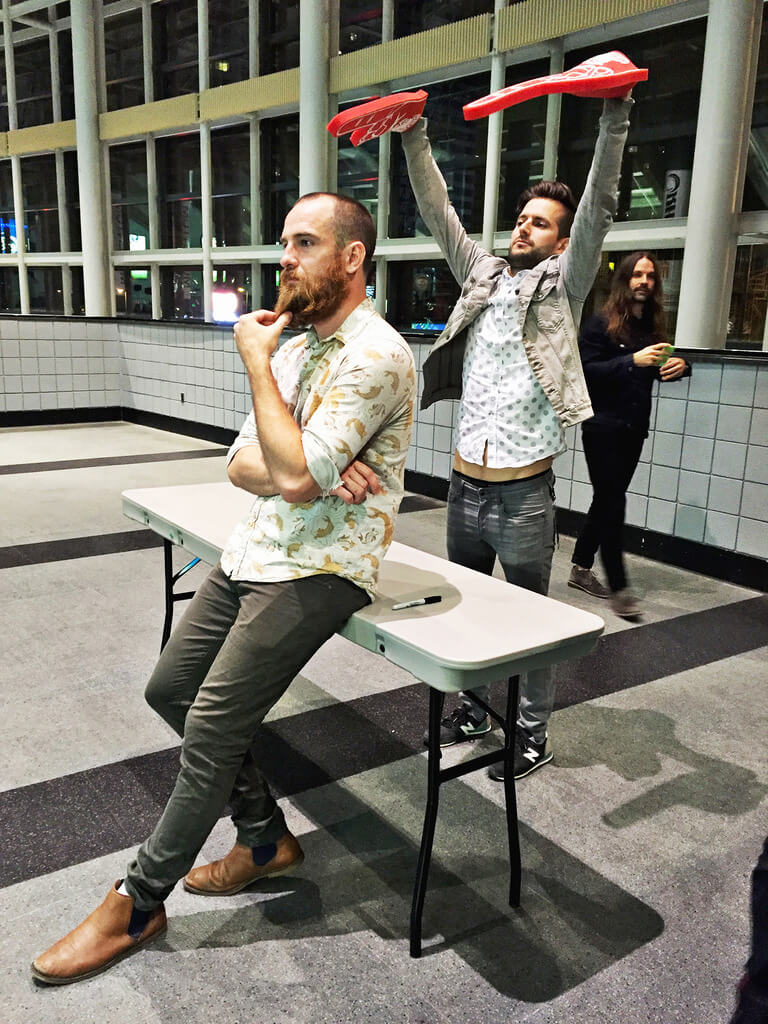 Todd is always up for a laugh…The last full day I had was in Grand Rapids. This arena was more downtown so we could walk around a bit and explore until it started raining. I found a coffee shop that was just about to close and sneaked in a decaf almond milk latte right under the wire. It was so good!!

One of the toughest parts for me out on a summer tour is that it’s so hot outside but the bus and the arenas are freezing (unless it’s an outside show, then you are roasting) so you are constantly switching back and forth from boiling to freezing and back again. So what the hell am I supposed to wear? Shorts and a sweater? Boots and a tank top? I changed like 10 times a day to try and keep up with wherever we were hanging out at the moment. Todd and I would probably just turn off the AC and open the bus windows if we could, but we would get immediately outvoted on that move fo sho by the rest of the bus…

I left Chicago that next morning and headed back home. It was so nice to be back and I missed our kitties so much, but I also immediately felt sad and the house seemed so empty. Thankfully in two weeks Todd will come home for a few days on a break before they head out again for another six weeks to finish the tour. You can bet you’ll see more “on the road” posts from me this summer!! Wish me luck!!